Illustrations of Saxon women's headwear need to be approached with caution because the artists were normally monks and their depiction of dress is often derivative in that they occasionally followed or adapted earlier paintings, and so the costumes may be of an earlier period, and perhaps not even English. (i.e. Harley Psalter c.1000 copied from Utrecht Psalter of almost 100 yrs earlier which itself incorporated earlier Mediterranean elements.). On the other hand, there's the Hexateuch (Canterbury c.1025-50) which C R Dodwell says usefully depicts the past in contemporary terms.

However, before we throw up our hands in despair, there's fairly reasonable evidence of headcoverings in archaeology and written sources to help with pictures. For the migration period we have pins positioned at the heads of female dead, and Aldhelm refers to such in the 7th century, and Bede relates a miracle where a paralysed girl cured at the site of St Oswald's death "tidied her hair, covered her head with linen, and returned home."

In 10th and 11th centuries headcoverings in illustrations are the norm. 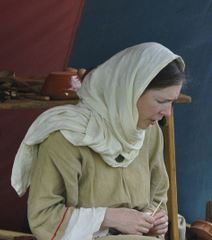 For fillets/headbands, there are 6th c. Kentish graves with gold-brocaded ones, and in the 10th-11th c. we have wills which indicate they represent portable wealth, adorned with so much gold they could be cut up and distributed as bullion.

And Gail Owen-Crocker states "...precious metal could be reclaimed from gold-brocaded braids is demonstrated by a goldsmith's hoard in the Statens Historisk Museum, Stockholm, Sweden, which included gold and silver threads, apparently flat strips unpicked from textiles and rolled up into balls."

Furthermore, an unfinished painting in the Hexateuch shows the fillets/headbands painted yellow to represent gold. And Owen-Crocker, commenting on the illustrations in the Grand Camee de France and the Ivory Halberstaat Dyptych, plus an illustration of the Virgin in the Prayer Book of Abbot Aelfwine, writes of fillets/headbands:- ".... which could have been of cloth or leather, or could have been richly brocaded or embroidered with gold on a base of braided textile, or possibly, could have been made of solid metal."

Queen Emma, on a drawing made between 1020-30 of her and Cnut presenting a gold cross to the New Minster, Winchester, is wearing a fillet/headband. The ribbons which dangle down the back may belong to this or, as with Cnut, could be her cloak ties. But bear in mind that Aelfhelm (late 7th or early 8th c) remarks on women who had long ribbons sewn to their head-dresses and hanging to the ground.

To further muddy the ribbon waters (and annoy!), Pompa in Prudentius's Psychomachia flaunts a similar "ribbon" (which could be a tablet braid or an embroidered strip) which hangs around her neck. While admitting that this ribbon is identical to the stole worn by clerics, both C R Dodwell and Gale Owen-Crocker suggest it may be a woman's fillet/headband. Since men, and clerics in particular, ascribe all vices to women and nearly always personify said vices as women, Pompa may simply be demonstrating the clergy's luxurious excesses.

But on the whole, written and pictorial sources strongly suggest that women's hair was concealed, especially in the 10th and 11th centuries. As to the type of veil, the large circular type of the 12th century is not found before the Conquest. 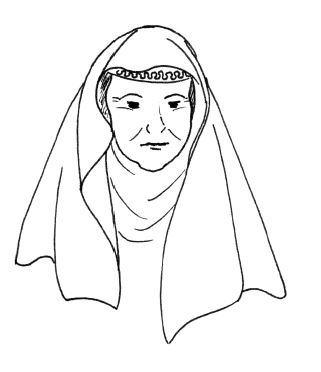 So how does all this apply on a practical level for female Saxon re-enactors to keep headgear in place? From empirical experience, observation, and listening to very understandable grumbles, slipping rails/veils are a beastly nuisance, and so is the loose hair under them - whisps and curls escape, tickle, etc.

One advantage to a linen triangle is that in both ways of wearing the fillet/headband, the rail/veil can also be pinned to the crown of the head, thus anchoring it even more securely - and in blustery conditions, another pin to the triangle knot stops it blowing up and over one's head. This approach is also less prone to leaving you with with mad wimple-hair when you take it off. Strangely, it's actually cooler on hot days too.

It can be very tempting to hold the rail/veil in place using the fillet/headband alone (not unlike the "sheikh of Araby" model). This approach should not be used.

The pictorial evidence, while giving the impression that the headscarf may be wrapped around, folded/tucked or pinned, it is NOT held down by an over-band. The fillets that are described as being finely worked and on occasion decorated with so much gold thread they have actual bullion value, were thought to be worn underneath the wimple across the forehead , so that the front portion peeps out from under the headcovering.

There is evidence for the "round wimple", a hemmed circle of bleached linen about a yard wide (95cm) with an overband that fits snugly over to hold it on. However, this fashion only emerged in the later twelfth century and is not appropriate for the period we cover.

How to make a wimple

That most iconic piece of Saxon women’s headwear is surprisingly easy to make:

You will need one continuous piece of fine white linen cloth: approximately one metre or yard across the whole width of the cloth - usually 60” or 1,50 metres wide.

Simply fold the edges over twice and pin into place creating a narrow 1/4” or 0.5cms hem all the way round and hand-stitch into place using small, neat whip stitches. The fillet is a hemmed strip of fabric, tied around the head at forehead level, which can be plain or embroidered according to your status.

Once made there are any number of ladies who will be happy to help with putting it on. The best bit is taking it off after the public have gone home!

A downloadable copy of this information is available here

For Vikings, the Coppergate Cap is an option [Cap].

Credits: with thanks to Georgina Riall and Alix Cooper.