This is a vey brief summary of the information available in 'Working with Bone, Antler and Horn' by Dave Constantine [1].

Generally, the species whose bones were utilised for working were common domesticated animals - sheep, cow, pig, horse etc. There are a number of bones that are regularly used – shoulder blades (scapulae), metapodials (the lowest long bone in the leg of cows, deer etc, equivalent to the multiple bones in a human hand or foot), ulna, tibia, ribs and other similar bones that are usually not associated with food.

A core toolkit should include a saw, a hammer, a pair of files/rasp (1 coarse and 1 fine), a drill (bow or reciprocating), a pair of pliers or tongs, and a small selection of chisels. A strong, sharp knife is also a must. 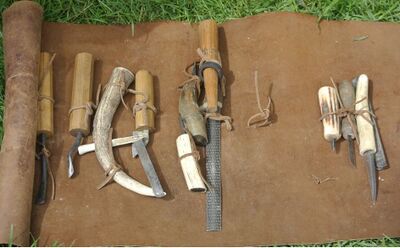 The tools required for boneworking

Bone and horn both have a very pronounced grain and thus must be worked along this grain. This is especially important with bone; any objects that will have stress placed on (needles, comb teeth etc) should always be made with the grain running vertically so as to retain the strength of the bone. Horn grain is less of an issue regarding structural strength but is more problematic when finishing an item; depending on the quality of the horn, sanding or scraping across the grain can raise a "fluffy" surface that then must be removed by scraping down the grain.

The first step of crafting any artifact is preparing and roughly shaping the material to reasonably resemble the finished item. After the blank of the item has been roughly shaped it can then more carefully worked to bring it to its final state. Knives, fine files and draw knives are all acceptable tools for this stage. Smaller items such as pins, needles, belt fittings and so on are usually best worked in the hand with a strong knife. If required, they can also be held in a clamp or pair of locking tongs to allow both hands free to hold the tool.

Generally, skeletal materials are easier to work when they have been slightly softened. Bone can be slightly softer and easier to work simply by soaking in water. Antler which is boiled for around 15-20 minutes after prolonged soaking is much easier to carve and will produces true shavings from a chisels rather than a series of small flakes. 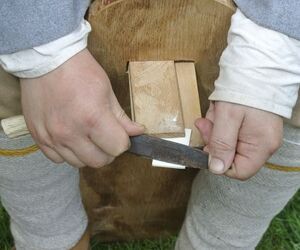 A boneworker filing the bone

The simplest method of drilling is to use the point of a sharp knife and twist it until a small hole is bored through the piece, depending on the thickness of the material a knife can easily create a larger hole if required, especially in thin horn. A knife can also be used to achieve a countersunk effect on pre-existing holes to round the entry and exit - such as suspension holes on a pendant. This creates an “hourglass” shaped perforation that is seen on many finds. Medium sized holes can be drilled using a bow or reciprocating drill. This would be the usual way of drilling rivet holes for items such as combs. Finally, large suspension holes and any other hole greater than about 3mm can be made using a spoon bit auger. 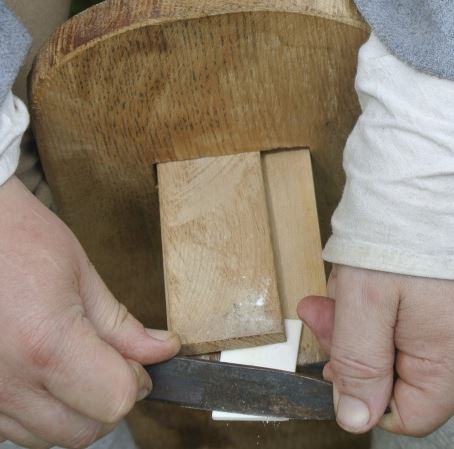 Clamping a sheet of bone to keep it steady.

Large pieces of bone and antler can be carefully smoothed with a fine file – remember to work with the grain to avoid flaking, especially with bone. A draw knife is also particularly good for finishing long lengths of bone and antler. Planes will give a very good finish, though they can be awkward to use depending on the workpiece. Smaller work can be gently scraped with a knife blade to remove imperfections and leave a smooth surface.