A family of bowed lyres existed comprising the Finnish Jouhikko, Estonian Talharpa, Welsh Crwth and English Crowd. Most applicable to our activities is the two-stringed Shetland Gue. 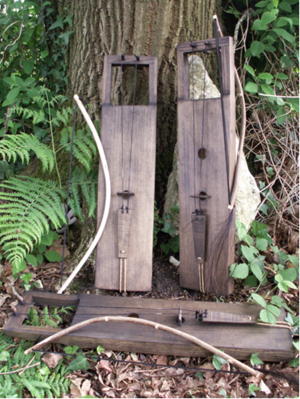 Whilst none have been found in the ground (only a single carving from the Viking age exists), it is widely accepted that this instrument was taken to Shetland by Viking colonists. Such was its popularity that it continued to be played consistently until the early 19th century, after which it finally gave way to the fiddle (itself, a famous instrument in Shetland). Be this as it may, the bowed lyres named above were certainly a common instrument across Northern Europe during our time period, indeed, they have continued to be played actively ever since, allowing their existence to be confirmed.

Rectangular in shape with a hollow sound box and playing window, the player bows across the horsehair strings. Notes are changed by placing the fingers between the two strings and either pulling or pushing on one string, the other string used as a drone. It is not easy to begin with, but once you discover where the notes are and practice, it becomes a really enjoyable instrument.