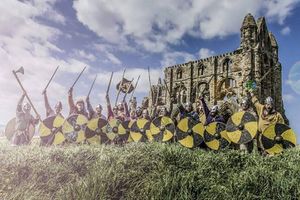 Hrafnsdale (rough translation 'Valley of the Raven'. Formerly Rochdale Sveiter) is a long standing Herred group within The Vikings society. Based in Rochdale, Lancashire, (though with some members further afield) Hrafnsdale is one of the largest groups within the society focusing on both combat and living history. We mainly focus on the portrayal of Vikings and Saxons between 793 and 1066 with a lot of members owning kit allowing portrayal of up to the 12th century for later period shows, such as the battle of Rhuddlan and the battle of Chirk. A second family to many members, we pride ourselves on our camaraderie and dedication to the group and its members, as well as our willingness to help others within the society. The group is made up of 50+ members (and growing) with people of all ages. 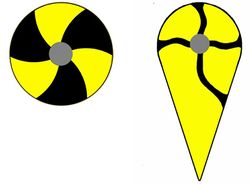 Hrafnsdale Herred boasts many accomplishments in combat,the most recent being presented with the award for Best Combat Group 2019 aswell as individual members winning socety awards of Konungrs Champion etc. As part of The Vikings, Hrafnsdale trains for combat using the rules and weapon regulations set out by the society. Under these rules we teach individuals to fight with shield, sword, hand axe and spear. We also provide training in missile weapons of archery, javelin and sling. We have multiple training officers (including RTTs (combat),RTTMs (Missiles) and RATs (acting)) and warriors specializing in advanced weaponry of long axe, long spear and great spear. Several of our group members have been inducted into both of the societys hearthtroops based on their skill level, though Hrafnsdale remains their first priority.The group colours are black and yellow with the standard round shields painted with 6 black and yellow anticlockwise spirals. The Design for kite shields for later shows is a black curved cross on a yellow field.

Although originally mainly focused on combat, throughout the years the group has slowly built up their living history encampment with multiple members using their wide range of knowledge in authenticity, camp life, historical crafts etc. With some tents owned by the group, and others owned by individual members, the group is capable of establishing a small encampment to portray the day to day life of a group of travelling Vikings and Saxons. we also have a number of skilled craftsmen and women to help teach the public about the other side of life in an encampment of an army on the march such as what food was eaten, passing time with authentic games such as hnefatafl and nine mens morris,and other skills such as woodworking and sewing.

Winner of The George Hay Trophy