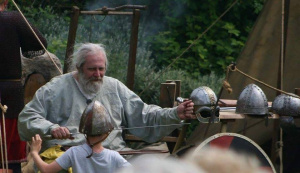 On the front cover of The Whale Road stands a line of warriors and, at the far end like an anchor, is the biggest one there.

That was Bryce Holmes, already a legend when I met him if only for his ability to squeeze into Brother John’s tiny car in order to get to Vike events. Watching him unfold was like witnessing a magic act.

That was him all over - a big man with big character with a sense of humour that kept everyone laughing in rain, heat or snow while his fierce loyalty and big, kind heart marked everyone who knew him.

People joined the Vike because they saw Bryce at shows – and they stayed because he, Brother John, his half-size sidekick, with Andy and Joan Birrell set up the second longship with extra training on a Thursday and Brother John and Bryce have kept it going all these years, bringing through many a fine re-enactor.

Everyone who knew him will feel the loss, particularly Glasgow Vikings, but those who travelled thousands of miles, sat round fires and laughed, drank and fought with him on the field will miss him terribly, mostly for Bryce just being Bryce.

Here's tae us Wha's like us Damn few, And they're a'deid Mair's the pity!