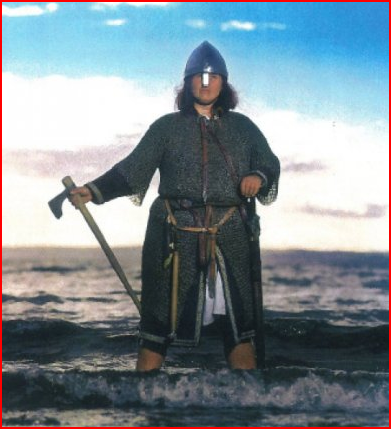 The Legend That Is Frania

Cattle die, Kindred die, Every one is mortal: But the good name never dies Of one who has done well.

Cattle die, Kindred die, Every one is mortal: But I know one thing that never dies, The glory of the great dead.

Frania joined the Vikings in 1991 (aged 41!) – only in order that her son Lech (who was 9 at the time) could come along and join in our practice sessions. Intending only to watch, she was, instead, given a helmet, gloves and a weapon and, from that moment on, there was no stopping her.

Even from the very beginning, she decided that, if she was going to be a warrior, then she would be a warrior in her own right and not play act by pretending to be a man. At the “Battle of Maldon” millennium re-enactment (1991), when told that she MUST appear to be a man, she taped a sisal string moustache to the inside of her nasal by way of a disguise. She was soon told that she did not have to pretend to be a man. She never did, ever again, have to pretend to be anything other than a woman warrior – all until her very last battle both as Battle Captain and, as it turned out, as a participant when at Hastings in 2009 she took the field on the Sunday as King Harold Godwinson. The memory of her being cheered from the field at the end of the fight still brings tears to my eyes.

When English Heritage sent out their instructions stating that no women were to appear as women fighting on any re-enactment battlefield, she sent the head of special events – Howard Giles – chapter and verse quoting a variety of sources sighting evidence for women fighting in their own right around Northern Europe around our time period. 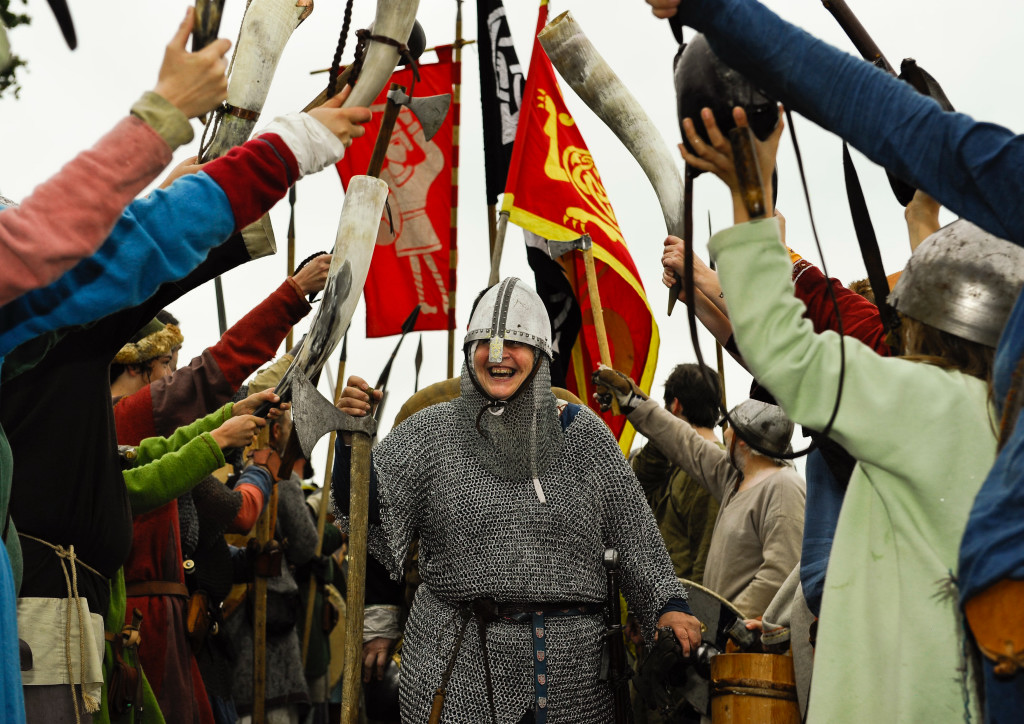 Four pages of them.

Howard quickly told her that these “no women” rules did not apply to the Vikings.

As Roger’s Assistant Battle Captain, Frania proved to be an invaluable diplomat smoothing ruffled feathers between different groups (within and outside the Society) to ensure that joint events ran easily with a minimum of friction. At the 2006 Mega Hastings her talent for languages was invaluable as she translated for Poles, Russians, Germans, French and any other language that was needed. One of the funniest examples of this was at the Skirmish Magazine awards ceremony for best Re-enactment Society for that year. She was speaking French to a Seven Years War era French dressed officer who could not understand her so the Iroquois Indian stood with them was translating Frania’s French into English and the French officer’s English back into French. This all went well until Roger called to her and she answered in English. She also used to single out anyone wearing Polish uniform, no matter what period, just to see if they could talk the talk as well as wear the pretties.

To many in the Vikings she was “the Battle Mummy”. When she took over as Battle Captain she became famed for writing interesting and, to some, challenging battle scripts with mayhem and fun throughout. She had a way of always getting what she wanted - “Men are so easy to manipulate if you grab them by the ego”. She even got Valhalla to fight as Saxons instead of Vikings on more than one occasion. She was not, however, always gentle if the situation demanded. How many of us in that longhouse on the Isle of Man ended up staring at our shuffling feet as she let rip into us because some people on the field were letting their testosterone levels get in the way. One hundred plus big burly blokes all feeling like little kids being told off in school in front of the rest of the class…..

Her fame is truly global. Her trips to Poland, Russia and Norway let her meet other groups and do other, amazing things. She was given the chance to help crew a Viking longship – the Haakon Haakonson - down the Caledonian Canal and across the Irish Sea. She went to Russia with invites for Hastings 2006 which she delivered – in Russian! She took the field with Sharon at Biskupin (the only females on the field) in Poland and amazed the Poles by getting up giggling every time they got knocked down. She also started teaching the Poles tactics, taking part of a unit round onto one flank and, although getting killed, allowing the rest of her side their only victory of the event. Whilst marshalling a battle in Wolin, she dragged one over enthusiastic warrior from the fray only to be asked “What do you think you are doing, woman?” to which she answered “I am not “woman”, I am Frania!” at which point the warrior ceased struggling and came quietly.

Whatever your personal memories of Frania, she has been an inspiration and a joy to know. I know that you will all miss her almost as much as I will and so I ask you to drink to………