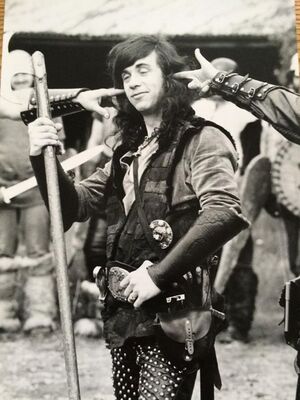 Geoff joined the Norse Film and Pageant Society (as it was then) in 1976, and founded the Blackpool Sveiter. This fairly quickly became one of the larger groups in the society, and a result there were several training events and shows organised in the area including on the beach or in the sand dunes, and in Stanley Park.

Having led Blackpool successfully, Geoff was asked to take over the leadership of the society when Gerry East stepped down in 1982. Membership at this time is thought to have been around 150. 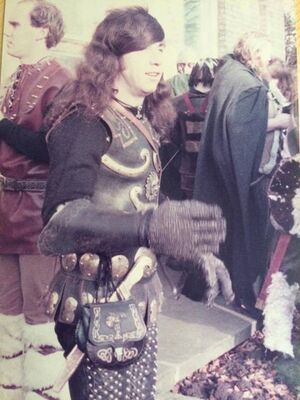 Geoff in the late 70s

Geoff was a slight figure, usually seen with a dane axe which was taller than he was, and like many of the Blackpool group at that time much of his kit was black, or leather covered in studs, or both. Having emerged from the time when authenticity was a concept still to be invented, the initial stirrings of a move to improve the accuracy of our portrayals from about 1983 onwards initially didn't sit well with Geoff, who believed that re-enactment should be fun and that imposing rules and restrictions on members would be counter-productive. Among several other things, this led to the departure of the Wessex group under Kim Siddorn to form Regia Anglorum at the beginning of 1986, which at the time reduced the society membership by about a quarter. 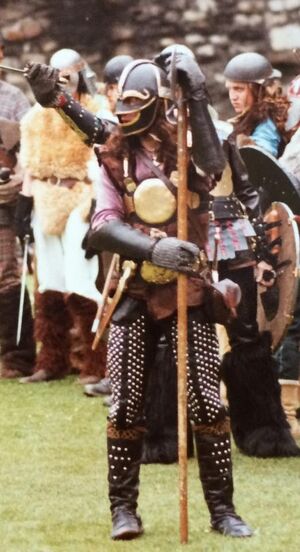 In the first half of the 80s, fragmentation in Viking-period re-enactment outside of the NFPS was very common, with many small independent societies around the country who had differing ideas of what was right and how to do it. These groups had split due to personal differences, then split again, and eventually there were over 50 small groups typically with less than 10 members each. Larger events organised by one of these groups frequently needed help from many others, and so they began to come together to try to work out some common aims and rules, which gave birth to the Federation of Dark Age Societies (FoDAS). This was seen as our direct competitor, and in some cases they got better events than us, and as a result a few groups also joined FoDAS directly to be able to do both. In time, this led to a suggestion that the whole society should join FoDAS, which was initially resisted, but eventually Geoff was persuaded that membership could be to our advantage, and that it could bring many more people into the society. Having proposed this at the Althing in 1989, the society agreed to join. The impact of this was fairly immediate, with a few members deciding that their time in the society had come to an end, and then over the following 12-18 months it became apparent that FoDAS itself was coming to an end as the smaller societies dwindled or applied for membership of the NFPS or Regia.

Having seen somewhat belatedly that authenticity was the way forward, Geoff threw himself into improving the society. His own kit had to change, but replacing a set of equipment gathered over 10+ years couldn't be done instantly. Incremental changes were made, and across the board the level of accuracy began to rise, while a growing interest in doing more than just fighting saw the first signs of a living history encampment and craft displays.

Geoff stepped down as Chieftain in 1990, handing over to Chris Robinson from Danelaw. Geoff's involvement in re-enactment was then very limited due to personal circumstances, though it was rekindled as an honoured guest at a number of Jomsvikings events in Europe. 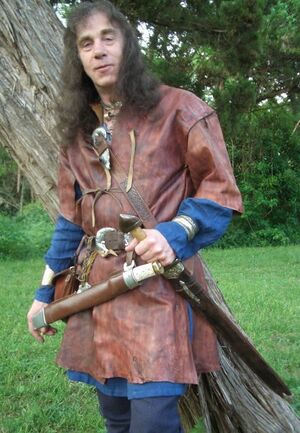 Geoff in 2003 at a Jomsvikings event

Footage of Geoff being interviewed for the BBC's Saturday Superstore programme from 1986 is available in the archives. He was a charismatic man who spoke well, and the video shows that even at a time when authenticity was still to take off, the effort expended in creating belt buckles, helmets and other items of equipment was significant, and the results are occasionally surprisingly good to modern eyes expecting horns and fur. 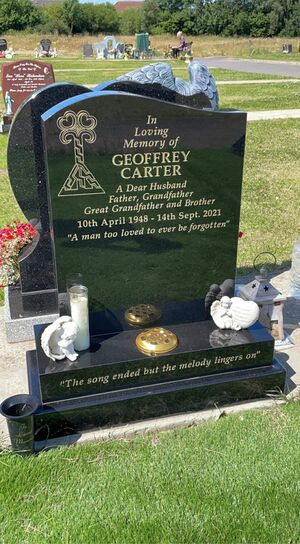