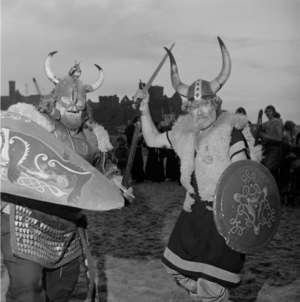 Gerry East (left) with George Cowley of the Vikings of Man, Peel, 1979

Gerry joined the Norse Film and Pageant Society in 1971, being among the first members of the society after it's founding in London. He acted as 2-i-C to Pete Seymour, and when Pete was unavailable he organised events and dealt with the day to day business of the society while speaking to Pete on the phone regularly. Gerry effectively took over the running of the society, and the informal appointment became formal when Pete and many of the original members left to form a separate society called the Odin Guard at the end of 1973.

Gerry grew the society considerably, and under his leadership groups were formed in multiple locations across the country. As these developed local identities, the original core in London styled themselves the "London Battle Group", while the others were more simply called by their location, hence Liverpool, Durham, Glasgow, Rochdale, Bristol, and so on. In time these became known as Sveiters, a title which eventually tranformed to Herreds.

Standing over 6 feet tall, and weighing in at more than 20 stone, Gerry was a giant of a man. In the early days of the society, equipment authenticity levels were limited by the availability of information, but Gerry was also keen to entertain the public and to give them what they wanted. As a result, the classic image of him shown to the left features a horned helmet and a large leather or later metal breastplate, and there are press cuttings in the archive where he argues forcefully that the Vikings _did_ wear horned helmets and he had plenty of evidence to prove it, which put him somewhat at odds with the academics of the day, and of course even further away from current opinions. Many of the early events were also jointly staged with other societies, including later medieval groups such as the Arkley Knights, and so many of the images and videos of the time show a mix of periods which looks strange to modern eyes.

A BBC archive film of the event in Tonbridge Castle in 1975 shows Gerry briefing the society, leading the Viking army against a medieval knight and his retinue who were defending their castle, and being interviewed after some footage of the combat.

Further footage from an unidentified event in 1977 shows a medieval siege engine being wheeled into position to attack a "village" defended by a straw bale perimeter topped with a single fencing bar, and features Gerry laying about him ferociously until he is overcome by his opponents.

Gerry also led the society to the Isle of Man Millennium event in 1979, with a battle staged at Peel alongside the older local tradition of commemorating the island's Viking heritage which had been running since 1961.

Gerry was Chieftain of the society until 1984, handing over to Geoff Carter of the Blackpool Sveiter. He continued to be an occasional participant in events, usually to be seen with five or six people clinging to his arms or back and madly hacking at him in an attempt to bring him down, as Gerry adhered to the old approach of only lying down when you were too tired or hurt to stand up any more. He also tended to skip the pre-battle briefings, and then decided that the display was getting boring and needed him to inject some life into it, leading to more than one group bestowing the epithet 'Gerry Script-slayer' on him. His final appearance at a major show came at the week-long Dublin Millennium event in 1988, where the opening parley of the main battle was interrupted by Gerry dragging a young woman out from behind the Viking lines by the hair, and demanding to know of the rescuing Irish army whose woman this was - when the somewhat confused partner of the unfortunate woman stepped forward, Gerry insisted that he fight the champion selected by the Vikings or she would be executed. The script had lasted 30 seconds of a 20 minute display. And of course on the defeat of the Viking champion, the woman was killed anyway and dragged away.

In keeping with his earlier equipment investments, Gerry's last appearance featured much the same kit as he'd worn in the 70s. As a concession to the current society rules at that time, the horns had been removed from his helmet - but the brass sockets for them remained obvious to all.