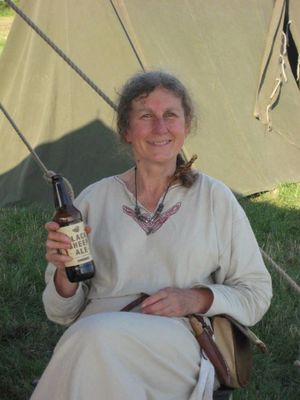 Jude joined the Vikings in December 2000, coming to Ousekjarr as her nearest group. Over the next 15 years, she took on a number of roles in the group including Living History Co-ordinator, and this led to her assisting in the organisation of the living history at a society level as well as becoming a village training officer. On moving back to her native Yorkshire, she retained her Ousekjarr membership until the middle of 2015, then started the process to transfer to the Volsung to support her new local group. Sadly her time with them was all too brief, and after a sudden illness she was taken from us.

Her memory lives on across the UK and with the many friends she made during her time with us, including a memorable occasion when she toured the Norman camp at Hastings to check that her organisation of the camp was satisfactory and returned to the Ousekjarr camp with two bottles of wine and a bottle of Normandy cider which she'd been given as thanks for her excellent work.

Tell of loved ones lost to slaughter,

In the telling, wounds are healing.

Wed to Skarthi, friend of Bloodaxe,

But all was lost when Erik fell

Skarthi’s seed grows in her belly.

Then one winter - late the season,

Skarthi sailed with too few seamen.

Waits with Hilda, waits not knowing.

Hard the years of Thorhild’s growing

Pock-face found her, beat her, used her.

In the dark woods, wise one dwelling,

Wandered southing where Wyrd willed her.

Then to Maeldune’s golden grazing,

Gave to Byrthelm - Sigrun and Tola,

Byrthelm cut down with Ealdorman.

Seek the North-land? Where are kinsfolk?

Fell beside his friend and ring-giver,

Raven meat upon the salt -marsh,

Bloodied symbol of her safety,

Thorhild wept to see him so.

Sated with an English fortune,

On the whale-road, leave the Christ –folk,

Sham of sweet-life now is shattered.

Away from danger, seek a haven,

With her daughters strong and fair.

Till the tide can bear them safely.

As the spray baptises faces.

Never could Christ baptism save her,

Up the wide Ouse into Danelaw,

From the vessel, on to quayside,

Then she went to feed her family.

Gave them apples, made them welcome.

Told of how she’d found her home-land,

With her Magnus, matchless warrior,

Thorhild feels a sense of knowing,

Offers service as an archer,

Healer, helpmeet, to the Jarl wife.

When the fight comes - arrows flighting,

When the fight’s done - Thorhild healing.

Dark her deep soul, not forgetting,

Feeding men, and wives, and kindred,

Herding those who sought to wander,

Keeping all to fire's warmth,

Shelter sought and shelter given,

Strangers found and turned to friends,

Fear would never hold her thrall,

Plain in speaking, wise in counsel,

Drawn by colder winds and moors

Back to North-folk's homely vale

Travelled far and found her calling,

Travelled home and found her hearth,

Yew-wood kept for times of danger,

Feared to tread where she kept hearth-guard,

Time alone she spurned in watching,

Sickness crept by dead of night,

Mortal man could harm her not,

But fire within was not outfought,

A day-time sundered all she'd wrought.

Joined by friends from far and near,

Volsung too had kept her heart,

All too short a time of knowing,

Walking with that band of friendship,

Led to moorland, high and windy.

While as always had her way,

So we part this side of Bifrost,

But fame shall ne’er fade away...