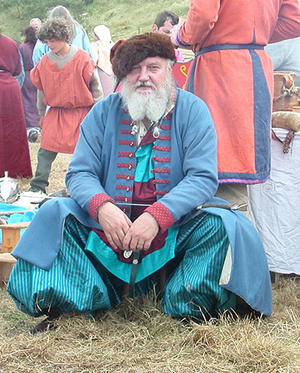 Bob joined us 2004. I was a bit sceptical as we had just had an issue with The Glasgow Herald and Bob was a reporter. To be fair I was right to be sceptical - his plan was to write Viking books and use us as his inspiration! At 19, he went to Vietnam on spec to try and cover the war in the firm belief that he could not be any sort of writer until, as Hemingway put it, I had been as drunk as could be, suffered a broken heart and experienced war. Since then, he earned a living as a journalist/writer safely in Scotland, with occasional lapses of judgement taking him to Sarajevo, Romania, Albania, and Kosovo.

Then he took up riding, taught himself horse archery and took up re-enactment, joining The Vikings group. He embraced fighting, storytelling, living history, socialising, travelling as a Viking and valued member of The Glasgow Vikings. He liked to look good at it. His authenticity checks were Rus Male Higher status/Viking Male Higher status. He became a Drengr and represented Glasgow at the Jarls' meeting a few times. Where I am sure he sat and listened quietly not…

I could tell you so many tales – but he tells them better himself – this is all true I was with him…. Bunratty July 2009: A Limerick limerick There was a young man who fell sick And had to be cured in Limerick He went to the place To see to his face And he’s still there, aged 106

I know this because, as the only still-sober one left, I drove a colleague to one to have his eye seen to, a precaution because he was a diabetic and had – ironically, after all the sword and axe swinging that had been going on earlier – sat down by the campfire and managed to get a spark of turf (peat to you and I) right in his eye. It was treated expertly on site, but as a diabetics best to get eyes checked, when he was asked if he wanted to go to the hospital, he said yes. How long could it be, after all? We would all be back in a couple of hours, having a laugh and more Guinness. EIGHT HOURS later, we staggered out into the first rays of a new, brilliant summer dawn. I don’t know about his eyes, but mine were pissholes in the snow. By 8am I was heading for my sleep. By 11am I was armed and fighting; it was not a glorious performance.

It was memorable for the characters in A&E. I know such places have a wealth of aliens in them, but Limerick’s were notable for their stoical acceptance of the wait and the amiability of their drunks. I can’t imagine many A&E departments that can lay claim to that. It also seems to be a popular meeting place. Halfway through the night, a herd of taxis drew up and vomited out paw, weans, uncles, cousins and brothers, all wailing and weeping for their mother, newly dead of a heart attack. In the A&E they met a family friend, nursing his burst nose where the next-door neighbour had banjoed him. They were all joined by an aunt and another sister, in their dressing gowns and PJs, who were already resident in the hospital and the wake got under way.

A drunk then insisted I was a Hari Krishna, having spotted the freshly-shaved napper of Yours Truly and the long Viking tunic. Presumably he thought the beard rings were part of the Krishna tradition. After he had sung the theme tune a few times, his mates pointed out that not only was I not Hari Krishna, I was possibly exactly the opposite. Still, he wasn’t getting it and sidled alongside to peer owlishly at me, then invite me to try and convert him. I told him what I was once again, in words of one syllable, as you would to a child, a dog … or a Limerick drunk. He nodded as if he had taken it all in. There was a pause, then he looked at me with desperate seriousness. “How can ye be so sure about yer religion?” Eventually, he was dragged away and peace reigned until the arrival of the identikit Rab C drunks with bandaged heads and the weeping party girl with her mascara down her cheeks and her boyfriend down for surgery.

I got back to the Viking camp at 8am, with the sun full up and even the sight of the diehard drunks still singing like maniacs round the half-roasted pig on a spit seemed like home after all that I had witnessed. Fecking brilliant, Fingal – there’s enough material in that one trip for a library of books.

Read his books - http://www.robert-low.com/oathswornseries.htm The Viking ones are based on The Glasgow Vikings and The Vikings. We are The Oathsworn.