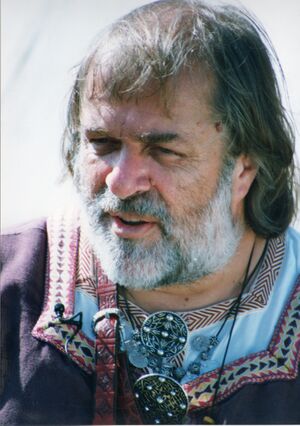 Tony joined the society in 1975, and managed to keep a relatively low profile as a provincial member.

When Chris Robinson stepped down in 1994, Tony was appointed as Konungr. Tony had previously been asked by Chris to serve as the Provincial Members Co-ordinator, a new role at the time as the number of members who chose to remain outside of the established groups increased. Tony had also played the role of Byrthnoth at Maldon in 1991, and while he’d be the first to describe his later combat appearances as both minimal and minimalist, he remained a figurehead on the field well into the 2000s.

As part of the push for greater authenticity as the 80s turned into the 90s, Tony had listened to the complaints of many members that they wanted to be more authentic but couldn’t find shoes anywhere. Tony then set about making shoes at a reasonable price, then adding shields and helmets on the same basis. He also filmed a number of our events on an early handheld video camera which he then compiled to produce an annual highlights video, complete with outtakes and funny bits at the end.

His own film appearances were rare, but in 1999 he played the Viking leader in the 1000AD documentary which was made to be broadcast as the millennium turned. Edited highlights of this can be viewed in the archives.

Tony was usually quietly spoken, thinking deeply about ways to improve our hobby while retaining the valuable lessons from the past alongside a refusal to simply throw out our traditions unless they had outlived their time, and was always approachable and prepared to listen to anyone. His laugh was loud, long, and heard often but he was also prepared to deal robustly with those who threatened to destabilize the ship.

He always made an effort to seek out and talk to new members to make sure that they knew who he was and vice versa, and to ensure that they were comfortable coming to talk to him. Whenever anyone queried his decisions he was prepared to listen and consider their point, but always with the grinning proviso that "if you're not careful, I'll promote you". He fostered many members as they grew into leadership roles, and did a huge amount to spread the admin and management load of running the society across multiple groups and around the country. Under his leadership, the society grew from a few hundred members in the UK to over a thousand across several countries, outgrowing several of our favourite venues in the process.

He greatly enjoyed society visits to West Stow where he could relax in a small group and not be responsible for very much at all, and also regularly attended events in Largs where he came to run a barbeque for the attendees. His sense of humour and self-deprecation were demonstrated by his chosen T-shirt for these events, which showed a pointed golden crown and proclaimed him as the "Burger Konungr".

Tony stepped down as Konungr in 2011, handing over to Roger Barry. He died suddenly at home on 12th August 2014.