Arguably the standout instrument of the age, our ‘authentic’ version is the ‘Germanic Round Lyre’. Generally oblong in shape, or occasionally oblong, it comprises six strings. The Old English phrase ‘hearpe’ (from where we have the modern word ‘harp’) was the name given and, furthermore, we know from the phrase ‘heapre nagl’ (literally, ‘harp nail’) that plectrums made of bone, horn or antler were used for strumming. Strings would have been made of sheep gut; as a re-enactor, I know all about the weather!!! I use synthetic nylgut strings tuned to G major.

The most famous lyre found in archaeology is that of Mound 1 at Sutton Hoo. This ship burial is reputed to be the final resting place of King Raedwald of the East Angles and dates to around 625. The lyre discovered had not preserved well, but we know of its shape, six tuning pegs, and richly ornate metal decorations. Lyres of a strikingly similar shape have been discovered at Taplow, Morning Thorpe and Bergh Apton, totalling four such instruments found in England applying to our time period. 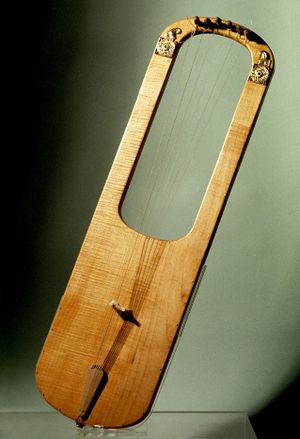 In my humble opinion, the most significant find is the Trossingen Warrior Lyre found in the grave of an Alemannic warrior and dating to 575-580. The instrument was beautifully preserved, showing its six tuning pegs, sounds holes, bridge and incredible illustrations of snakes, beasts and armed men. 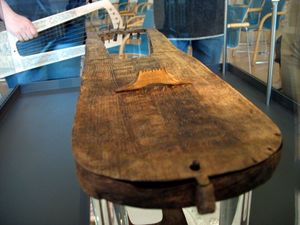 The grave contained various artefacts, including a sword at the deceased’s right, and the lyre held by his left arm. The shape is very slightly different from those lyres found in England; still generally rectangular with curved edges, but narrower and sleeker. It is possibly the earliest Germanic Round Lyre discovered in archaeology. Whilst I appreciate that this is a very early example, it does confirm that the romantic image of the “warrior bard” truly existed.

A high volume instrument, the lyre is truly beautiful. It was designed to be played in the hall where it would be passed around to compliment many stories. Professional lyre players may have composed pieces for kings and thegns. The warrior-skald, Egil Skallagrimson, is a case in point, and surely the Trossingen Warrior held a similar profession. It may also have been played as part of ‘ancestor worship’, particularly in the Pagan period. It can be argued that the lyre is an instrument of mythology, in a similar way to ‘The Dagda’s Harp’ of Celtic Lore. From Saxo Grammaticus, Gesta Danorum, XII:6:

“First he [the lyre player] performed various pieces so that everyone was filled with grief and numbness. And afterwards the sound of the lyre forced them to an impudent and lively state of mind, then jesting tunes which made them eager to move their bodies and they commenced to exchange anguish for applause. Finally it enraged them to madness and rashness, so that they were seized by madness and in utter fury gave great cries. Thus the state of their minds was changed variously. Therefore when the music in the hall came to an end, they saw that the king was driven to madness and rage, so that they were unable to restrain him. Thus they were seized by excessive madness and powerfully overthrown by fury; according to their natures the men's madness increased. And so overcome by the strength of the struggle, he broke their hold and darted forward, wrenched open the door and seized a sword and killed four of his warriors, and none could come near enough to restrain him. At the end his courtiers took cushions and from every side approached, throwing them over him until at great risk they all were able to seize him. When he regained his wits, he paid the just weregild for the warriors' injuries.”

The God Bragi is depicted as a poet and harper, it is highly likely that he would have been venerated by musicians of the age.

There are two distinct playing styles. Firstly, the block and strum method whereby the player strums all of the strings in rhythm, removing the fingers of the strings one wishes to hear, thus producing chords and melodies. Secondly, by plucking whereby the player drones a high or low string from behind the playing window, and plucks other strings from in front. Corwen Broch demonstrates this here: