Naalbinding means “needle binding” and is a method of interlocking loops of thread using an eyed needle. Because the thread must be drawn through the eye, lengths of thread are used rather than a continuous ball.

There is evidence of naalbinding from well before the Viking period. Finds have been recorded from the Neolithic period and ancient Egypt, as well as the Roman era, and as far afield as South America from the Maya period.

Finds from the Viking period

Many of the finds of actual naalbinding are fragmentary, including pieces found in graves in Finland and one C10 fragment from Novgorod. There are two examples of C10 naalbound mittens from Iceland in the Viking period and one C11 mitten from Norway The only British find of naalbinding is the “Coppergate shoe liner”, a sock from the 10th Century found in York. There are traces of madder dye around the ankle. The stitch used is referred to as the ‘York stitch’. The sock had been darned in several places.

Needles used for naalbinding should be smooth and fairly blunt with a large eye. Thick needles of wood, antler or bone have been found in great number in Viking sites, including on Greenland (wooden needle), Elisenhof, Germany (wooden needle), the Faroe Islands, and Lund, Sweden, (approx. 50 bone and antler needles). These needles range from 0.5 - inch to over 1.5cm long.

To sew a sock in the naalbinding technique, you will need a blunt needle with a large eye and some thread. The thicker the thread you use, the quicker the sock will grow. Fibres in very thick wool tend to split apart and distinguishing between the loops that you have added and the splits in the thread may be very difficult.

Probably the most difficult stage in naalbinding is starting of the first series of loops around the central stitch . Study the following instructions and diagrams carefully before starting off.

1) First of all cut a length of thread about 18" - 46cm. long and make a loop at one end and pass the other end through the needle (a). As a rough guide this loop should be no bigger than the circumference of the end of your little finger.

2) Hold the loop by the knot between the thumb and forefinger of the left hand (assuming you are right handed) and with the right hand pass the needle and thread down through the loop, bringing it back up through the centre of the new loop you have created (b). Pull the thread through until this loop is the same size as the initial one.

3) Now hold the new loop firmly in position using the thumb and forefinger of your left hand and make another loop by passing the needle down through the initial loop again and bringing it back up through this new loop and the previous loop (c).

4) Hold the new loop firm. Now we are ready to sew the first real stitch. Make another loop as before, but this time bring the thread back up through the new loop and the last but one loop (d). Once you have managed this initial step, you will find it easier going from now on. 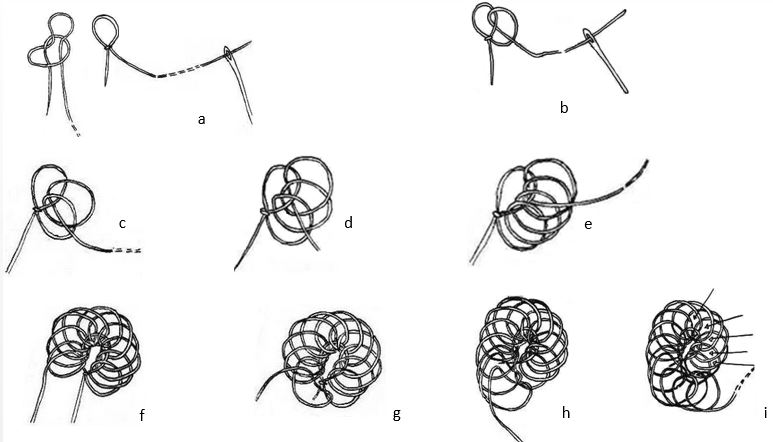 6) Continue in this way until you have a series of stitches all the way round the initial loop (f).

7) You have now completed one row. The next row has to be built up on the this row instead of the initial loop. Pass the needle down through loop 1 of row 1 and back up through the last but one loop as usual (g).

8) In order to expand the fabric you have to work two stitches into each loop of row l, so pass the needle down through loop 1 of row 1 again and back up through the last but one loop (h).

9) In the same way work two stitches through loop 2 of row l. Continue in this way as indicated by the arrows working around the fabric (i). You'll find the more you do this the easier it will become as the previous row's loops become progressively easier to find as the fabric spreads out.

If you have floundered already, do not despair. You probably will not be able to sort out the mess, so start again. It sometimes helps to begin with a larger loop size until you get the hang of it. Try to keep the loops an even size and hold each loop firmly whilst you make a new one. It usually takes several attempts to get it right.

Eventually, you will run out of thread. The easiest way to join in a new piece by bringing the thread up from the back of the fabric and letting it lie next to the end of the old thread. hold the thread firmly in place whilst stitching and worry about working the ends in afterwards! (This is not necessarily the best method but it works)

As the rounds increase, you will end up with an oval shaped piece of fabric large enough to cover the end of your toes. At this point you no longer need to work two stitches into each loop of the previous row - only one. After working several rounds in this way you will begin to see the sock shape emerging. If you need to increase the size slightly to fit the sock over the ball or your foot or instep, work an extra stitch every 10th or so stitch, by working twice into the row above. (Decreasing if necessary is achieved by missing a loop in the row above)

Finally your sock will be large enough to cover the foot from the toes to the front of the ankle. This is often worked as a separate piece then joined to the 'foot'. By now you should be able to work this technique out for yourself . Just work a new piece in the same way as you did the toe until it is large enough to cover the heel. Then join about half the circumference of this piece to the lower half of the ' foot' and work in rounds to form the 'leg' of the sock.