For authenticity purposes it is important that kit, costume, weaponry and character be consistent with the status a member wishes to portray, and the reality of the time.

The Viking Age was a disturbed time, with significant upheavals and - for some - a surprising amount of geographic mobility.

However, travel was difficult and dangerous, and early medieval society was much more complicated and hierarchical than modern Britain. People were expected to know their place, defer to their betters and act responsibly towards their inferiors. Social mobility was possible, but generally quite modest, rising generation by generation rather than the ‘rags to riches’ of the American dream.

All the above are important to individual identity in the Viking Age, and being able to answer them will help to develop your character, and determine what kit is appropriate for you to use.

In the early medieval world, everybody has a lord - even kings are subject to a higher power (God). Being a servant to someone more important was perfectly honourable. The great office-holders of Anglo-Saxon England were from the class of thegnas ("retainers", or thegns).

There are many roles that can be played by women in the Society. Viking colonists settled down to the farming life in their new home, or established themselves as traders and became town-dwellers. Both farming and trading were family businesses, and women were often left in charge when their husbands were away or dead. There is also evidence that women could make a living in commerce in the Viking Age, for example merchants' scales and weights have been found in female graves in Scandinavia. A single persona does not have to cover absolutely everything a women can do. So you may develop a female persona for the village and just drop that to live a different persona when on the battlefield. However, we ask that you dress for the job that they are doing. A male warrior wouldn't plough his fields before setting out raiding, wearing his armour and weapons, nor would you wear your 'Sunday best' whilst slaughter your excess livestock in November (Old Norse - 'Bloodmoon'). So why would a woman who has become a warrior go out to fight in an easily trip over-able long frock? You dress for the job you are doing. If you are a warrior, you dress as a warrior. 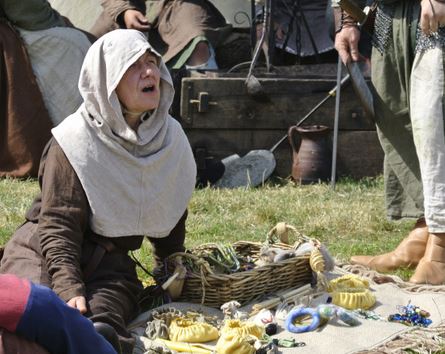 There are mentions of women travelling: Gudrid of Iceland is probably the best known, see the book "The far traveller voyages of a viking woman" by Nancy Marie Brown for details. She was probably unusual, but there is a significant amount of female scandinavian DNA spread across the Danelaw areas of England suggesting that many Viking women moved beyond their birth countries. However evidence suggests that on average the women did not travel as far as men: a study from the University of Nottingham suggests that the closer you are to Scandinavia the more likely you get women settlers, see https://www.nottingham.ac.uk/-sczsteve/Gothenburg_13Oct2011.pdf

There is some limited evidence for isolated cases of women fighting, but they would have been far, far less common than male fighters. One problem with identifying female warriors is that there is a tendency to sex the grave by the grave goods, and weapons in a grave means that the grave is described as male. Whilst DNA testing has been used to identify at least one 'warrior's' grave as potentially holding a female body [1], this evidence has been challenged [2]. At best, they would have been a small minority, and may well have dressed in male costume when fighting (there is mention in Laxdaeila Saga of Aud losing her husband Thord who accused her of wearing men's trousers, which appears to be grounds for divorce in early medieval Iceland). We therefore expect warriors to be dressed as men, unless playing a specific female character such as Æthelflæd, Lady of the Mercians (c.870–12 June 918).

Another possibility is a religious role. There were female vǫlva or völva who were seers or shamans in the old Norse religion. The problem with that role in mid-10th century UK is that the country was mostly christianised, and whilst there would undoubtedly have been remnants of pagan practices the Norse religion would have been on the wane. On the Christian side you would have pilgrims, nuns and abbesses.

Of course a common role for women in early medieval Europe was slave, but if you're frustrated at the choice available so far then that probably won't expand the horizons in a direction your new members find terribly enticing!

If you want some brief high level background on women in the period there's a nice page on Viking women here: here and one on Anglo-Saxon women here.

Please, please note - you can't be a mercenary as an individual. Mercenaries don't exist. Lords and leaders may change sides for political or financial reasons, but the rank-and-file fight for their lord from duty and honour, in exchange for gift-giving, land and assumed rewards. Individuals aren't waged as such, and it's very important to have a lord, which gives you a place in society: changing sides will diminish your honour and trustworthiness, and is a very risky thing to do. If you mean "a warrior who is part of a band out to get rich through piracy and violence (and open to being hired)" the word you're looking for is "Viking".

Occasionally someone will bring together a hotch-potch of bits of kit from across the early medieval world, claiming to have assembled them in a career a-viking. We really do not encourage this approach.

You may well have a very good back-story for how you acquired items of kit from Ireland, England, Denmark, Kiev and Byzantium, but you will not be able to explain this to every member of the public who walks past. They will look at the muddled blend and either be confused or (if they know about the period) realise you are confused. Neither reflects well on the Vikings Society.

Kit should be consistent in its time-period, race and social class. It may be that a few items hint at a more complex character (eg richer decoration on the overtunic of an upwardly-mobile but lower class individual), but the overall effect should be obvious, straightforward and, above all, consistent.

Further information is available through the Society kit guides.