A three-stringed rebec (fiddle-type instrument) was discovered in Hedeby, Denmark and dated to the late 10th century. There is little more evidence of fiddles, and this one may even have been an import from the continent. I do not have one in my collection, there is no way of telling whether it truly is a Viking or Anglo-Saxon musical instrument. An interesting discovery nonetheless, fiddles may have occurred more commonly in the early 11th century, but this is only conjecture. 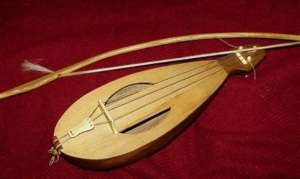