As re-enactors, we often find ourselves carrying all sorts of things that we would not want the public to see during show hours. One of the simplest, most convenient and most authentic solutions is to make a satchel.

The evidence for satchels or shoulder bags comes from several places. There are manuscript illustrations showing various forms of satchels. Bury Psalter f.118r. 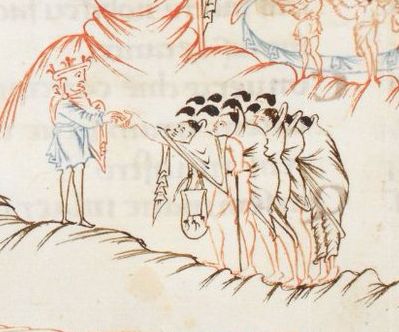 There are also several depictions of what look like satchels in ecclesiastical contexts (probably to hold gospels) in Pictish sculpture, e.g. St Vigean's in Angus. The Stuttgart psalter has several scenes with satchels. The Abbey of St John, Müstair has a picture of the stoning of St Stephen (painted between the 9th-12thC) where there are several satchels.

From the Danish areas, there are two finds of frames from Viborg and fourteen from Hedeby. Out of the Hedeby finds, three still had remains of the bag construction attached. The remains consisted of fabric threads, and in at least one case it could be identified as being a sprang construction.

There are two bag frames from Birka, and one from Sigtuna, see [2]

a fragment that is almost identical in size and form to the Hedeby bag frames can be found in the Miscellaneous Objects chapter of "Wood and Woodworking in Anglo-Scandinavian and Medieval York". The find number is 9142, Coppergate period 5B which is roughly 975-mid 11th century (Illus 2388).

The Loch Glasshan leather bag is slightly before our period, but still of interest. It is from a Crannog, which was a domestic site, and whilst there's no evidence to say it wasn't ecclesiastical, there isn't any to suggest it was either. The National Museum of Scotland made a reproduction of it, that can be found here [3]

The Corpus Christi Budget and Armagh book bag are both from our period (8th-9thC).

Sadly, we are still waiting for the Dublin hoard of bags and pouches. Even the most recent 2016 'Viking Dublin' book merely acknowledges that they "await study" - and it then notes that a preliminary study counted over sixty leather bags, pouches, purses, and containers from excavations, with another twenty found while the book was in preparation. There are piecemeal descriptions of some of these finds in the book, but it's far too risky to try to work reconstructions off these. However, there are at least two re-used book bags in this corpus - stripped of fittings and altered, or discarded underneath the tenth-century town rampart. It's a pretty good interpretation that these were robbed and re-purposed - suggesting that the large leather book bags could well have found their way into more everyday use. we do have to be careful though, as we do not want everyone to end up with a 'looted' bag.

What satchel can I use with my kit

The 'all fabric' satchels are so generic they will fit with any culture. The bags with wooden frames seem to be limited to Viking culture based on the find locations. The evidence point to framed bags to be made of fabric.

Satchels are very easy to make. A helpful File:Satchel pattern.pdf is available. If you want to make a Hedeby style bag, a description can be found here [4]