Armour made up of scales sewn or riveted onto a ‘backing’ garment of cloth or leather was used across Europe and Asia through the Classical and Late Antique periods (1st-7th centuries). It continued to be used in the Byzantine empire into the eleventh century, and may have been used in the Frankish world at least into the ninth century.

There is no evidence (linguistic, pictorial or archaeological) for scale armour in the British Isles, and no evidence to suggest that it was produced and used in Scandinavia.

An excellent catalogue of examples is available thanks to Jennifer Baker of the New Varangian Guard.

Anyone interested in lamellar armour should read Timothy Dawson's 'Armour Never Wearies': Scale and Lamellar Armour in the West, from the the Bronze Age to the 19th Century (History Press, 2013).

Three Frankish warriors. The left-most appears to wear scale armour on his torso; the two on the right only wear scales on their thighs, with the strapping clearly shown. 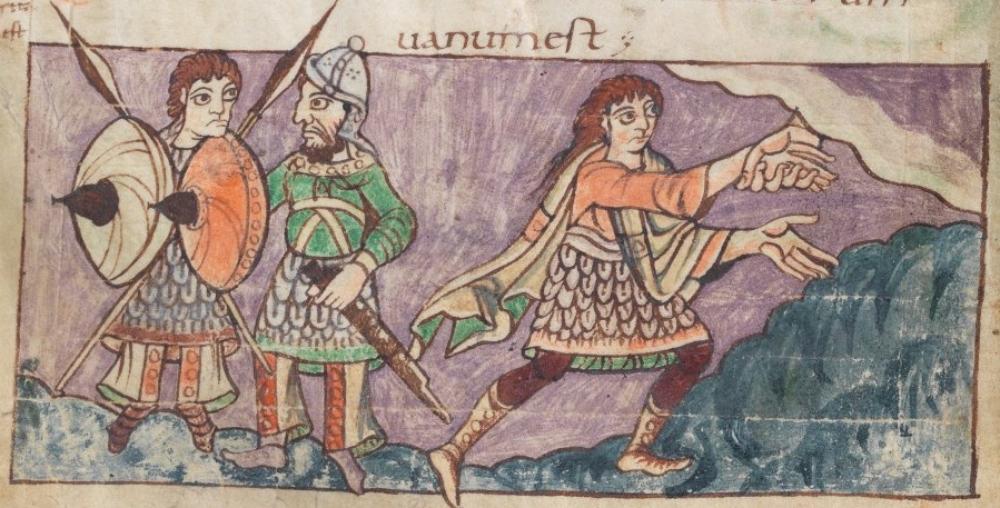 Goliath (below) is shown wearing scale armour; his sword-belt vanishes at the waist, as one would expect if the armour around his legs was separate to that on the torso. 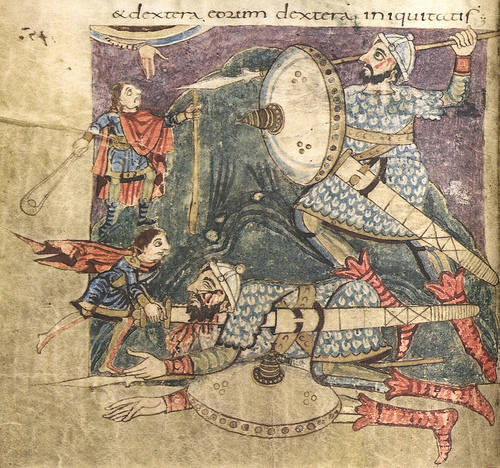 Based on this evidence, | Simon Coupland concludes:

Scales should be made of metal, horn or leather and were typically quite small, often rectangular (portrait) with a flat base and rounded bottom. They should be sewn or riveted onto a backing garment so that they overlap downwards (i.e. starting from the top), so that the top third of the lowest scale is covered by the bottom third of the next scale up, with the second row up set so that each scale overlapped two in the row below. Each scale normally had six small holes, two set vertically in the centre at the top and two more vertical pairs immediately below, on the left and right edges. The two lower pairs of holes were used to hold the scale to the backing garment; the upper pair of holes was used to tie a strip of thicker leather lacing in place – which lifted the scales above slightly, preventing them from cutting through the stitching and requiring regular repairs.

Credits: this section draws heavily on the articles cited. Thanks are also due to Dr. Timothy Dawson.