Armour made up of leather or metal segments tied together to form a protective layer was relatively common in the East, especially among the tribes of the steppe. These included the Turkish military elites who came to dominate the Islamic city-states of the middle East.

While metal, horn and leather lames are known, the steppe tribes' emphasis on mobility on the battlefield meant that leather lamellar (much lighter) was more common, even among high status individuals, especially as it could be hardened by boiling or waxing to provide considerable protection without adding much weight. Heavy metal lamellar seems to have been restricted to heavily armoured shock cavalry, perhaps following much earlier Byzantine, Sassanid and ‘Abbasid traditions of using ultra-heavy cataphract or clibinarii cavalry. Depending on status, lamellar armour may be worn on top of a hauberk and padding (encouraged for the Turkish ghulam elite) or on top of padding as an armour in itself (more typical of steppe warriors).

As with maille hauberks, the length of lamellar armour varied. Most common was a straightforward ‘cuirass’ covering the torso, leaving the arms uncovered, and generally not extending below the belt, typically worn on top of padding and maille. However, knee-length lamellar was often worn by heavy cavalry and is known (though not common) for some infantry. Lamellar incorporating elbow-length sleeves is well attested in Seljuq art and was widely used by the Mongols; it should generally be restricted to the ghulam elite.

Lamellar armour may consist of a large number of leather or metal plates (‘lames’), typically rectangular or with slightly rounded corners, frequently around 1½” x 3½” (though different sized lames could be used in different parts of the same armour), laced together with leather thonging. Lames should be laced together first as rows, overlapping horizontally in both directions from the centre of the chest to the middle of the spine. The rows should then be assembled so that they overlap upwards (i.e. start from the top, with the second row on top of the one above it) and should be continuous (i.e. no distinction between body, skirt and sleeves).

Lamellar armour may be made in front and back segments, or as a single cuirass opening on one side, buckled or tied together at one or both sides. The cuirass should be held together by lamellar sections over the shoulders, which may extend to cover the upper arms.

Although technically not lamellar, there are examples of banded leather armour from twelfth-century Syria. Such armour may be made from horizontal bands of leather around an inch wide, with a break on one or both sides, sewn or tied together so they overlap.

Confusingly, Byzantine lamellar was fastened rather differently, using a mixture of lacing and rivets. This type of lamellar was distinctive to the Roman East and should only be used by Byzantine regulars - who are unlikely to be found in an insular context. 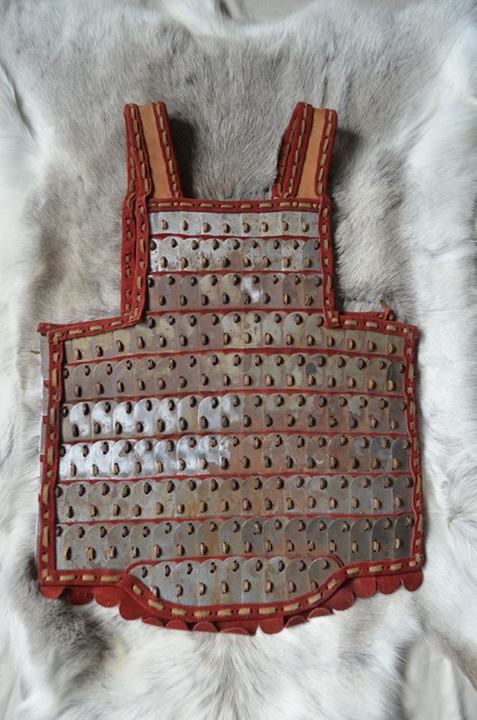 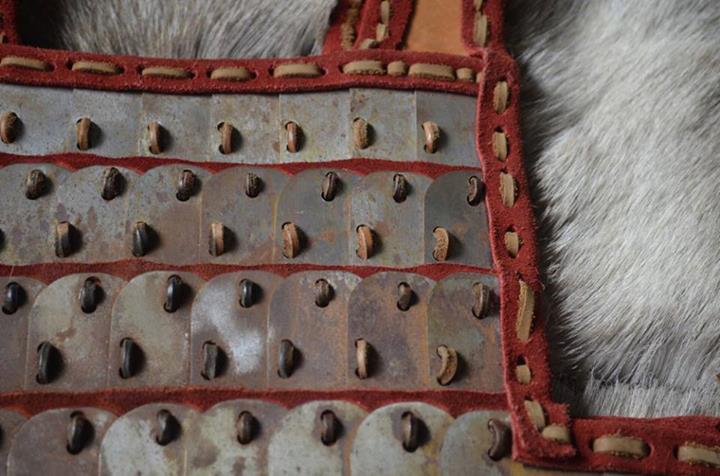