Weaving is a method of textile production in which two distinct sets of yarns or threads are interlaced at right angles to form a fabric. The longitudinal threads are called the warp and the lateral threads are the weft or filling. Weft or woof is an old English word meaning "that which is woven" (Collier, Ann M (1974), A Handbook of Textiles, Pergamon Press, p. 258, ISBN 0-08-018057-4). The method in which these threads are inter woven affects the characteristics of the cloth. Cloth is usually woven on a loom, a device that holds the warp threads in place while filling threads are woven through them. The way the warp and filling threads interlace with each other is called the weave. In the tenth century in Northern Europe there were two types of looms: the warp weighted loom and the two beam vertical loom. The two-beam vertical loom may have been used mainly for tapestry whilst the warp weighted loom was for weaving plainer fabrics(Karen-Hanne Stærmose Nilsen, "Kirkes Væv"). In towns of the Late Saxon period there may have been a change in loom type (finds in Winchester) such as use of the two-beam vertical loom for 2x1 twill (a fine cloth whose weave is not natural to the warp-weighted loom) and the treadle-operated horizontal loom.

You may find a quick glossary of technical weaving terms helpful:

The warp weighted loom is known to have been used because of finds of rows of loom weights, these varied in shape and size by place and period (Karen-Hanne Stærmose Nilsen, "Kirkes Væv"). Early Saxon weights were usually ring-shaped, Late Saxon bun-shaped. 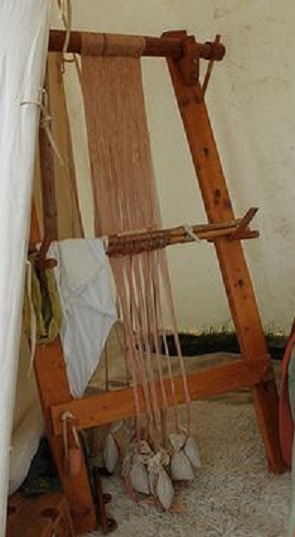 On warp-weighted looms the cloth starts from the top and is worked downwards. The warp threads are suspended from a cloth beam at the top of the loom and tensioned by a row of weights that are tied on to the warp threads at the bottom of the loom, the strength of the cloth is imparted by the warp threads. About 28 clay weights would be needed for approximately a yard’s width.

The warp threads have to be fixed to the cloth beam somehow. In the 20th century Marta Hoffman studied people who were still using the warp weighted loom and wrote about a method of preparing the warp threads that may stretch back to prehistory (see Hoffman, Marta, 1964, "The Warp Weighted Loom", Oslo, Universitetsforlaget, details about Lappish weaving pages 56 - 114.) 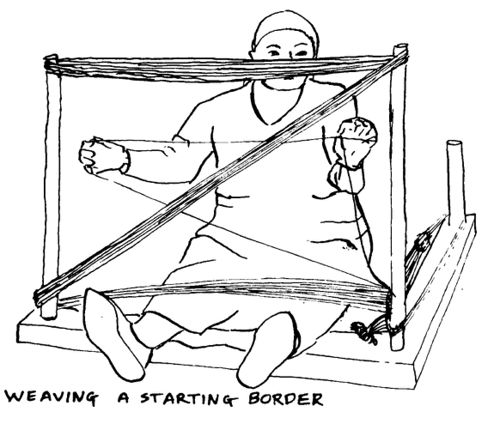 An L shaped frame is made of wood with two long rods and one shorter one sticking up vertically as shown above. A band is woven between the short rod and one of the longer ones. The weft thread for the band is long loops that are pulled through and wrapped around the longer rods.

The long weft threads are tied up in groups. We know that this was done from a find of a warp from Tegle dated to the late Roman period (dating from Hougen, Bjørn, 1935 "Snartemofunnene", Oslo, page 83. Details of the warp in Hoffman, Marta & Trætteberg, Ragnhild, 1960, "Teglefunnet", Stavanger Museum Årbok, 1959). This type of loom cannot weave bales of cloth to be cut up. The weavers would have measured the warp threads according to whether the finished article was to be garment or blanket length

When the band is completed it is sewn to the top beam of the warp weighted loom. The warp threads are untied from their bundles and tied onto rows of weights. Strong loops called heddles are tied onto the threads to allow them to be moved to & fro for weaving and spacing cords are attached at the bottom of the loom to space out the warp threads and stop them bunching up around the weights. Weavers may have worked in pairs, one at each side of the uprights which stood propped at an angle against the wall. The way the warp and filling threads interlace with each other can produce a range of different weaves.

A pin beater is a cigar-shaped tool pointed at both ends used to compact the weft threads on an upright loom by pushing down between each of the warp threads one at a time to deal with knots and tangles. Two finds (Sutton Courtney, Oxon; Castor, Peterborough) were of bone.

When 5 to 7 weft yarns had been ‘picked’ (passed to and fro through the warp) they were beaten upwards to close the weave. Most weaving swords would have been made of wood and therefore perished, but in Kent women’s graves have yielded iron weaving swords ranging in length between 9½ inches to just under 2 ft. These have a tang at both ends; there would have been a wooden handle on the long tang, and the short tang may have served as a pin-beater. At West Stow a weaving sword just over 2 ft long with a squared-off tip and a long tang has been found; the blade itself was pattern-welded, pointing to its owner being of high status.

It is believed that most spinners and weavers on the warp-weighted loom would have been women, and the word ‘wife’ is sometimes explained as ‘weaver’. However “this cannot be reconciled with its root form, and the real origin of the word remains obscure; the Anglo-Saxon for ‘to weave’ is wefan; a male weaver is a webba; a female weaver is a webbestre; and to equate wif with webbestre is to give up all regards for facts.” (W W Skeat, The Etymological Dict. of the English Language), and quite as many men as well as women may have been employed when it came to producing textiles in industrial quantities on large secular and ecclesiastical estates and in towns. During the early centuries weavers would have produced cloth for their families as needed. The West Stow settlement is believed to have had three weaving huts and may have produced sufficient cloth to supply other settlements. Later, on large secular and ecclesiastical estates weaving became more organised and specialised. In some households the skilled weavers were thralls; in the late 10th century two such women were mentioned in Wynflaed’s will.

Full descriptions of weaving on the warp weighted loom are given by Marta Hoffman in her book "the Warp weighted Loom".

Credits: with thanks to Jennifer Bray and Georgina Riall.