This Old English word winingas is the plural of wining (a word which relates to the act of ‘winding’). The equivalent term in Old Norse is Vindingr. Between reenactors they are also known as leg wraps. 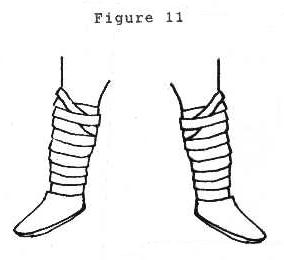 Winningas or winingas are long strips of woollen or linen material, about 8' (2.5m) long and 2" (5cm) wide, similar to the puttees adopted by the British Army from the 1890s to 1980s. They were wrapped around either the bare legs or trouser legs for extra warmth and protection. They would have protected the bottom of the trouser legs from wear, preventing tears from brambles etc. With clothing being of considerable value and costly to replace or even repair, the importance of this cannot be overstated. Also by effectively closing off the shoe, they keep mud, stones and snow out, keeping one's feet and legs drier, in winter conditions, than might otherwise be the case.

By far the most illustrated method of fastening the winingas is to wind them up from the ankle and to fasten them at the top under the knee. The loose end appears to be tucked in, but the exact method is not known. A method based on puttees is to run the strip from the knee down under the bridge of the foot, before winding it back up, and tie the two ends together. other alternatives are to use clothing hooks, or to split the last 12" (30cms) of the end into two strips and tie them together.

Experience has shown that linen winingas usually unwind themselves at the most critical part of the battle, so wool is probably the best.

It appears that most leg bindings were simply tucked in to secure them although a number of other options may have been used such as cords, and garters.

Bindings in the Viking age were made woven to the correct width usually and there is minor evidence of them being cut from wider cloth. If you do opt to make them from a larger piece of fabric, the winingas should be cut diagonally across the weave of the fabric, as they tend to stay up better.