Wool a very common fabric. Because of its warmth, it is particularly suitable for outer clothing. Over-tunics and cloaks should be made from wool; trousers, trews, socks, hoods, hats etc may be made from wool. The Sails of Viking ships were also created from strips of woolen fabric sewn together.

Wool may be finely woven (particularly appropriate for higher status) or may be rougher (more appropriate for low status). Wool is naturally water-resistant (you never see bedraggled sheep!), and some garments (particularly cloaks) may have had their outer layer made from unwashed wool to add an element of water-proofing.

Modern machine woven cloth tends to be 'fluffy' on one side, concealing the weave. The other side is usually satisfactory and can be used in preference. Some "fluffing up" was done by the Vikings however, but mainly on cloaks. A shaggy appearance was obtained by combing the cloak with a fullers teasel, thereby making the cloak warmer to wear. The Vikings were not the barbarians that our Victorian forefathers imagined, so extremely coarsely woven cloth such as sack cloth, is not required for clothing. 10 threads per centimetre was average, whilst 60 threads per centimetre was not uncommon for extremely fine material.

Woollen fabric may be made from two different colours of wool (one horizontal, one vertical). Contrasting colours can create (at least to the eye and at a distance) the impression of a different colour – for example using red and blue to look like a ‘strong’ purple. This is perfectly authentic, provided both of the underlying colours can be achieved with vegetable dyes. Further information on weaves can be found here Weaves and patterns.

Chequered patterns in the weave were known in our period, though we would prefer to restrict chequered material to Welsh-Brythonic characters to preserve a degree of "cultural definition", making them more readily recognisable in shows. Two colour checks were the most common, though higher-status characters may use three or four.

Anglo-Saxon wills which deal with the disposition of sheep by the hundreds, which tells us that wool was a major economic resource.

The Middle Conversion period gives us Aldhelm’s riddle (Exeter Book No 35) for a mailcoat in which he describes a loom which is thought to be warp-weighted, though this is debated by some. Relating to the trade in woollen cloth there is Charlemagne’s letter to Offa of Mercia in which he complains about the size of the cloaks that the English merchants were supplying, which, although not as long as before, cost the same. He complains he could not cover himself up in bed with them, and when riding they did not adequately protect him from the wind and the rain, and when he answered the call of nature they did not keep him warm.

J. Clark (Saxon & Norman London) mentions a set of royal ordinances being issued ‘a little later’ after Aelfric (10th c) listing the customs duties on wool and cloth bought in England by Norman, northern French, Flemish and German merchants (he does not, however, specify how much later ‘a little later’ is).

Further indirect evidence for sheep and the wool trade are to be found in the names of places all over the country: Shapwick, Shepperton, Shepton, Shepreth, Isle of Sheppey, Shipham, Shipton, Shipley, Shiplake, Shiplate, Shopwyke.

Wild sheep grew an outer layer of short kemps (knotty hair which won’t felt) and a sparse undercoat of short-stapled fine wool. Domestication bred denser undercoats and replaced the kemps with long-stapled wool, and eventually by the Anglo-Saxon period sheep had been bred to grow a medium wool coat. The flocks were tended by shepherds, and kept not only for wool but also for milk which was used for drinking, cooking, cheese and butter-making. The shepherd was entitled to have the herd’s milk for seven days after the equinox and a bowlful of whey or buttermilk all summer long.

The sheep then were smaller than today’s breeds. Probably the closest breed today is the Soay sheep, which has flourished on the islands of St Kilda in the Outer Hebrides since the Viking era (there are also flocks at Woburn and Flag Fen, a bronze/iron age settlement museum like West Stow near Peterborough), and the Orkney sheep on North Ronaldsay (which lives on seaweed!) 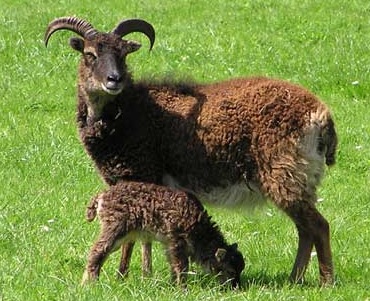 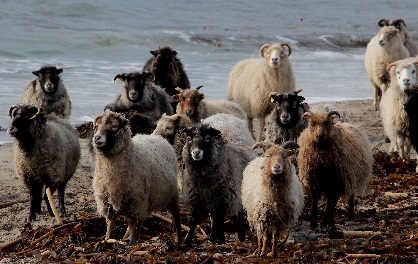 The fleece colours were predominantly grey (a mixture of white and dark fibres), but there were white, near-white, reddish-brown and dark-brown animals as well.

The most common woollen fabrics found have been from the fleece type ‘generalised medium’, i.e. long-stapled, but for heavier garments such as cloaks a short-stapled wool would have been used.

Up until the Late Saxon period, the very fine woollen cloths would posssibly/ probably have been imported.

The sheep were sheared or plucked (a process known as rooing) in June, each animal probably giving less than a kilo (2lbs) of wool. This had to be washed or ‘scoured’ to remove dirt and some of the lanolin contained in the fleece. For this purpose it is probable that stale urine, which contains ammonia, was used.

Credits: with thanks to Georgina Riall.