Combat and Other Rules

Unless otherwise stated the Society Combat rules will be adhered to.

Taking Prisoners After taking the first hit and while counting to ten if the enemy grabs hold of a warrior he must surrender. He may then be asked twenty questions to which he must answer truthfully with yes or no answers after which he is to be released.

Warriors may seek out their enemy’s camp at night but must not engage in full combat. They may use “Touch Combat” to take out an enemy sentry, what becomes of the dead sentry will depend on the rules specific to that event.

Scouts may be captured if the defender can grab them by the arm, once grabbed the scout must surrender. He may then be asked twenty questions to which he must answer truthfully with yes or no answers after which he is to be released.

To “kill” an enemy in touch combat the attacker must touch his enemy’s body with the blade or head of his weapon before his opponent detects his approach. If the defender sees his attacker and brings his weapon to a defensive position then no combat may take place.

For some longer tests there may be a requirement for the warrior to hunt or forage for food. Due to limitations of space and laws against poaching the following may be used to simulate hunting.

A volunteer takes the part of a beast, either deer, boar or bear. The beast carries meat that will be given to the hunter after a successful hunt. The beast wanders about the hunting area wearing a distinctive garment, every 15 minutes they must deposit scat, preferably something biodegradable.

Suggested meat to be carried by beasts:

b. Boar: Bacon or pork

If it is decided that the warriors may forage for food then stashes of vegetables or fruit should be made in the foraging area. Ideally these should be placed in bushes and there should be some subtle mark on the bush to represent its fruit.

Sometimes it will be necessary to get game information to the warriors. This can be done by deploying peasants who may be asked yes/no questions in the same manner as for prisoners. If the peasant is approached and engaged in friendly conversation then ten questions may be answered. If the peasant is assaulted and held against his will he will only answer five questions, three yes/no questions and two to which he will give directions and numbers. This assumes that the peasant knows the answers as he may not have come across any other warriors!

The warriors are not allowed any modern equipment such a watches or lighters (those that insist on smoking must use authentic standard flint and steel to light up). In some conditions modern footwear may be allowed. 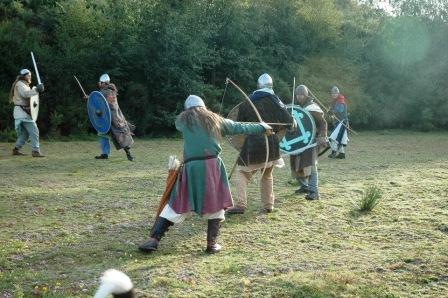 Assuming that the test is to be taken some time during British Summer Time the warriors are to depart the car park at 1800 hours. After dawn the warriors must break camp and seek out and fight their enemy. When they set out to seek their enemy they must be wearing their combat safety equipment i.e. helmet and gloves.

If a warrior is ambushed in his camp before he has donned his combat safety equipment he has the following options:

a. To allow himself to be killed safely by raising his hands above shoulder height.

b. Fall to his knees and surrender.

c. Grab his helmet, gloves and a weapon and running away while getting ready to fight.

If the warriors have axes and seaxs with them for use in combat they may be provided with equivalent sharp items for use in their camp. These items are to be left at the campsite when they seek out the enemy or handed to the referee. When not in use these items are to be placed in a modern bag so as to be clearly identifiable to any warrior conducting a dawn attack.

Ideally for each test there should be two warriors, war-bands or armies so that they act as enemy for the other. There is to be no combat before dawn, early rising warriors will have the opportunity of seeking out their enemy before they break camp or even rise from their beds!

Recognition Warriors who complete an Extreme Viking event may have embroidered on the sleeve of their tunic one of the following symbols: