Conical helmets evolved from the late Roman spangenhelm, and were designed to deflect blows away from the head. Examples of conical helmets (both as archaeological finds and depictions) are found throughout our period, and appear in two main varieties: 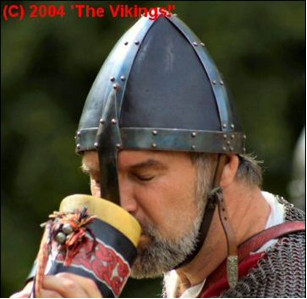 A good example of a leather-panelled spangenhelm with nasal - though one might expect a mailled warrior to have a metal helmet in line with his wealth. 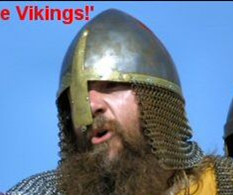 The aventail attached to this beaten conical helmet indicates that this photograph was taken at a pre-950 show.

A spangenhelm will be appropriate for more or less any show from the late Roman period into the twelfth century, and represents a sound investment. One-piece beaten conical helmets are first found in the eleventh and twelfth centuries on Continental Europe, but pictorial evidence suggests that they were in use earlier (though probably not much before 800). Either spangenhelms or beaten conical helmets may be used throughout our period, i.e. 800-1100. Note that one-piece conical helmets should not be used before the ninth century – we would prefer to see spangenhelms or domed helmets.

There is very little evidence of decoration on conical helmets (perhaps understandable given the number of them required – England expected one to be made or paid for by every 5 hides of land in 1013 to equip a fleet, suggesting mass-production). The exception is the ‘Wenceslas’ helmet, which has silver wire beaten into the nasal – decoration should be restricted to kings.

Some conical helmets seem to have been painted in the twelfth century, probably as a hangover from the First Crusade (metal gets hot in the sun, and a layer of paint makes it easier to handle). Painted helmets are therefore not considered appropriate for our period.