Now here my prey I shall seek,

I will hunt night and day.

With Craft I will make my stand,

By war lore foemen will I slay.

Another way of looking at Extreme Vikings is to use the term Experimental Archaeology Historical Role Playing (EAHRP). Experimental Archaeology Role Playing (EARP) is a concept devised by the Rangers of the North, these are a group of reenactors who have an interest in all thing Tolkien based in Toronto, Canada. They have created a group to live as rangers in the wilderness of Canada and the USA. Much of what they have decided to do fits with the aims of Extreme Viking, what follows in this chapter is an adaption of their aim with those of Extreme Viking.

Admittedly EAHRP is a made up acronym by the Rangers Of The North with the addition of H by the Vikings and borrows loosely from other concepts.

The concept behind EAHRP is an inspired combination of experience living history and live action role-play. The main mandate of the EAHRP system is the usage of real, tools, weapons, and costume elements to support a standard level of authenticity and applicable real-life skill sets in weapon use, bush craft, and traditional handicrafts such as sewing, blacksmithing, cooking, etc.

The translation of real combat with real live-steel weapons by trained handlers (combat qualified warriors) under a strict code of safety, real homespun costumes hand crafted from materials that would only be found in a historical milieu and real world bush craft skills that represent a broad spectrum from interpersonal negotiation, to culinary arts.

EAHRP is the fine art of “pretend” whilst utilizing an ultra-realistic approach to just about everything. At its simplest manifestation, it’s zero tolerance to plastic and modern with a few ultra-rare exceptions seeded in safety and comfort, if you must have your medication you must have it! Some of the food our ancestors ate is not as palatable as it once was! Simply saying the running mantra is if it’s wool, linen, leather, iron, bronze, steel, horn, it’s fair game. 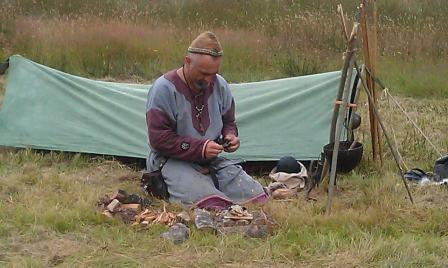 In the staging of historical re-enacting with real antique and antique replicas mimicking the mannerisms and cultural materialism of history, a deep appreciation has manifested as to how simple tools, environments, and even methods in which clothing was constructed (hand stitched as opposed to machine) could contribute to an atmosphere that can transported participants into another world.

This idea is especially reinforced in the hobby of historical “trekking” whereby participants exile themselves into the wilderness for extended periods with only equipment, clothing, food etc. that would be researched and deemed appropriate for whatever era of history or fantasy the group is focused on.

This type of historical trekking is often referred to in a scholarly sense as “experimental archaeology”, a now respected and accepted form of research in scholarly circles. 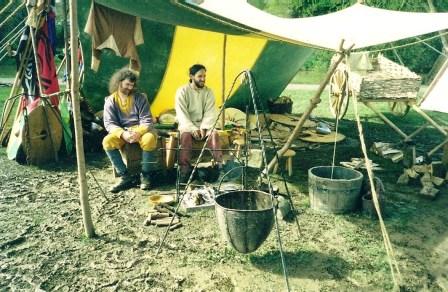 In the context of EAHRP LARP does not necessarily mean that the participants have taken on a character and set off on a quest, though this is an option they may choose, it is that they are setting aside as much of the modern era as possible when taking part in this activity. The words “as possible” are important, it is unreasonable to expect a participant to set aside all their experiences in the “real world”, to attempt to do so would surely lead to mental illness!

Why is this different from the standard re-enactment, in particular LHE. Most reenactors perform in the “third person”, that is they talk to the public about the past they are representing as themselves, this make it very easy to communicate ideas as you can reference what the audience has seen on TV for example. Some perform in the “first person”, that is they stay in character at all times and pretend they don’t know what a TV is, this usually confuses and annoys the audience, especially those that notice the reenactor is speaking a language their character has never heard. Both of these type of LHE reenactors often argue that they need an audience to keep them honest and don’t see the point in being authentic once the public leave. EAHRP is for the benefit of the participants with no public to talk to and is better thought of as how the participant would cope if dropped into a different time zone. You are yourself but with only the survival tools available in the time period you have chosen to visit.