The Glasgow Vikings started 40 years ago, 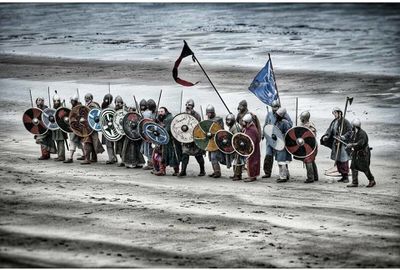 currently we have 55 members, here are some of our warriors on Thurso Beach.

The group owns a large living history and also enjoys combat, it meets on a Wednesday in Glasgow and Thursday in Overtown have a look at www.glasgowvikings.co.uk and www.facebook.com/glasgowvikings

The group predominately portray – the Hiberno Norse who were originally the Viking colonists of Ireland and Scotland who starting as early as the ninth century intermarried with native Gaels and adopted the Gaelic language as well as many other Gaelic customs, such as dress. They are generally known by the Gaelic name which they themselves used, of which "Norse-Gaels" is a translation. This term is subject to a large range of variations depending on chronological and geographical differences in the Gaelic language, i.e. Gall Gaidel, Gall Gaidhel, Gall Gaidheal etc. Other modern translations used include Scoto-Norse, Hiberno-Norse and Foreign Gaels.

The group also portray - the 9th century Picts who were an ethnic group in central and northern Scotland from Roman times until the 9th century. Most historians agree that around 839 a huge battle took place in which the Pictish king and his brother died while leading his men against the Vikings. The defeat and slaying of the Pictish royal houses and its warrior elite delivered the decisive shift in the pattern of succession and handed the Pictish crown to the Scottish House of MacAlpin.