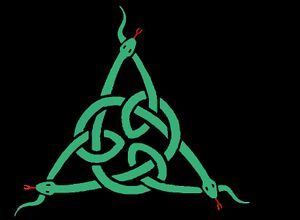 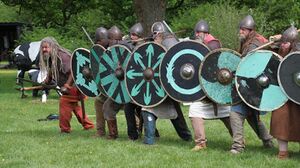 An example of Hwicce shield colours, jade and black

Hwicce was originally a tribal kingdom in Anglo-Saxon England and Wychwood Forest one of its territories. Founded on the 22nd February, 1995, by some of the members of the Wychwood Warriors - a re-enactment society based in Oxford - Hwicce, the group, went on to gain its Herred status the following year.

Hwicce has always been a very strong, cohesive group, both in terms of combat and later, with the living history display. However, membership declined for a few years. In recent years, there has been a resurgence in Hwicce's numbers and the group is very active again both on the field and off. We have an ever-growing active fighting unit with a good blend of experience and youth. Our Living History skills are very broad and include weavers, dyers, seamstresses, embroiderers, blacksmiths, armourers, leatherworkers, carpenters, artists and cooks.

Our ranks have also swollen over time with children, all of whom love to dress up and play surrounded by the spectacular British outdoors. In modern life we are based in the Milton Keynes area, although a few of our members range from much further afield. We portray Anglo-Saxons, Vikings and occasionally Normans.

Hwicce has always been run by a Witan, a body of five persons elected by the full membership to handle the day to day running of the group. Members of the Witan also, on occasions, fulfil the roles required by the society of each group, such as treasurer or secretary. The five members are all of equal importance and have an equal vote. There is a very strong ethic of equality in the group and that everyone should improve the group for the sake of the group.

Group Officers (in no particular order) 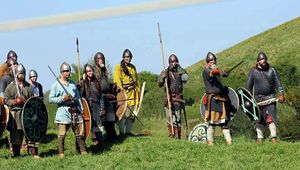 At ease - ready for battle! 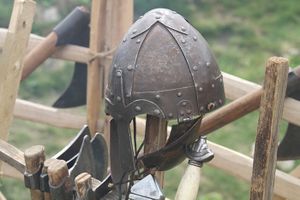 Some of the tools of the trade

Hwicce train to fight to rules set out by the Viking Re-enactment Society, to which we have belonged since 1995.

Hwicce have five Training Officers (Thegns) who teach everyone, from the newest recruit to the longest serving member, on how to use the various weapons of our period safely but effectively.

We teach the theory and commands required to fight as part of the shieldwall, as well as the skills to fight as an individual. Combat normally takes two forms at shows and events - scripted battles to re-create historical events and competetive, free fights where the warriors skill determines the victor.

We fight with shield, axe, seax, spear (short and long), sword and dane axe. We have further specialities in archery, javelin and Florentine (using two weapons of equivalent length). New members will be taught to use the axe, seax, sword or spear safely before moving on to the more advanced forms of combat. 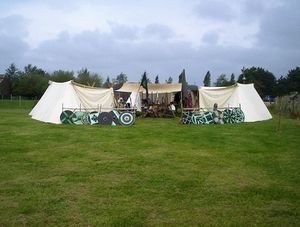 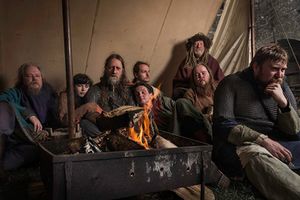 Relaxing round the fire (photo courtesy of Russell Cobb)

In addition to demonstrating the methods of warfare of the period we also have a living history encampment that provides a glimpse of what life would have been like in Saxon Britain. Our interactive living history makes use of historical items, activities and dress to ensure that participants and observers alike experience a sense of stepping back in time.

Our encampment shows the daily life of a group that was travelling during the period and allows us to demonstrate some of the crafts and skills that would have been used at the time. Our members skills include such crafts as tablet weaving, naalbinding, basket weaving, carpentry, wood carving, leatherworking and embroidery. 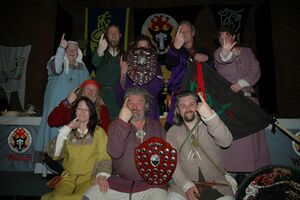