Wooden cups and bowls were widely used. These can be hand carved but most of the surviving examples were turned on a lathe, as can be seen from the cores removed at the end of the turning process. A large number of cone-shaped wooden 'cores' have been found on archaeological sites, as discarded by-products of wood turning. There are two ways of using the wood on a lathe. Small items can be made from round wood and this method was often used to make cups. Typically a long section would be used and several items turned from it, in this case the items are relatively deep for their diameter. Alternatively the wood can be split lengthways and the external shape of the bowl roughed out with an axe, the final shaping of the outside and the shaping of the inside being done on the lathe.

The small scale portable lathes in use were bow powered, using exactly the same sort of bow that was use for hunting and war. In fact it is surmised that some bow lathes might have been old war bows that had lost some of their original power.

Smaller bow lathes have a loose bow that an apprentice would work, but these types of lathe are fairly small items, and more suited to turning antler or smaller pieces of wood. As the bow is hand operated you cannot use a loose bow lathe on your own, as you cannot properly hold and use the bow and cutting tools at the same time. Hence the need for apprentice power. larger bow lathes with a fixed overhead bow only need one person to operate.

Larger lathes use the ubiquitous tree branch or pole for power rather than a bow, but the lathe itself is fairly similar. All pole lathes only need one person to operate. The operator powers the lathe with one foot operating the treadle whilst balancing on the other leg - and at the same time holds the cutting tools in the hands. 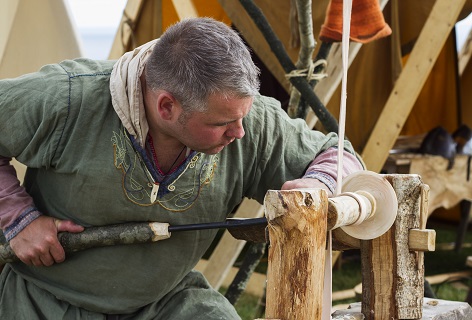 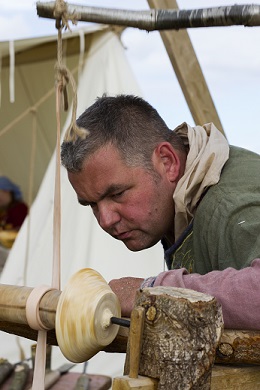 Credits: with thanks to Steve Lines and Robert Wilkinson. Photo credit Julia Kuivenhoven