For the published rules on Missile combat, consult the The Missiles Officer's Training Handbook 1.2 or see the pages on Missile Combat

There are finds of wooden bows from Northern Europe, dated from the fourth to the tenth century.

The typical viking age bow is a long bow of around 6' (1.8m), often made of yew but far from exclusively. They are oval or rounded D shaped in cross section. They may be self nocked, or more unusually have horn nocks.

'Self' bows should be 4-6 feet long and have arrows long enough to be drawn to the chest. 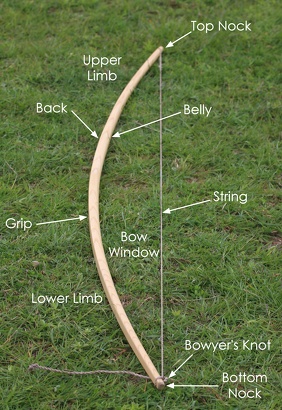 Back - the side of the bow facing away from the archer when loosing.

Belly - the side of the bow facing the archer when loosing.

Bow window - the space between the string and the belly of the bow.

Draw - the longest distance from the belly of a bow to the string when pulled.

Grip - the place where the bow is held when loosing.

Lower bow nock - the position at the bottom of the bow where the string is fixed.

Lower limb - the part of the bow below the grip.

Nocking point - the place on the string where the arrow is fitted.

Serving thread - additional thread in the middle of the string to protect it when fitting an arrow.

String - the cord to which arrows are fitted.

Upper bow nock - the position at the top of the bow where the string is fixed.

Upper limb - the part of the bow above the grip. 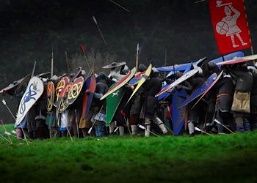 For more information review the pages on Arrows and Bolts.

On every side arrows sped and blood flowed…with the arrows mingled the stones cast by slings and war machines. The siege of Paris 885-886, according to Abbo 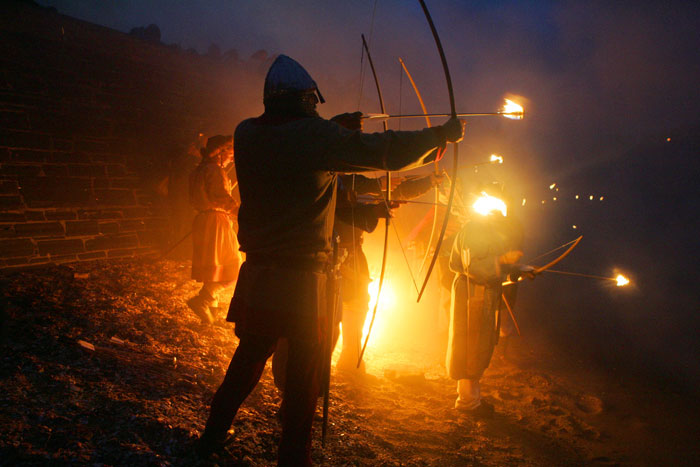 All arrows and bolts to be used in combat must be fitted with rubber 're-enactment blunts' over a flat end. 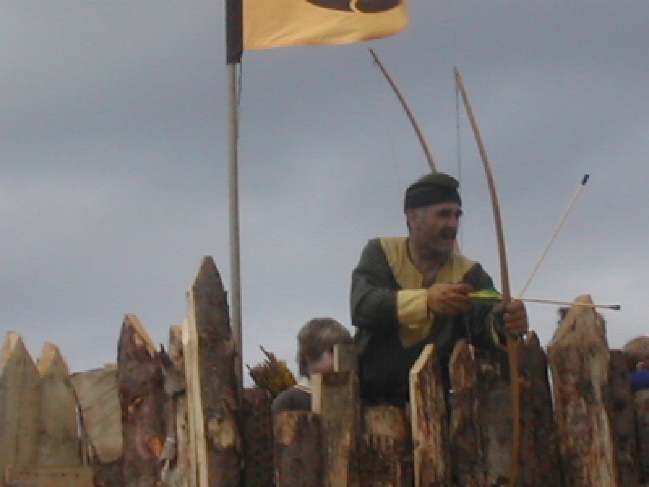 The Archer at War

As a missile warrior you have the following mission: 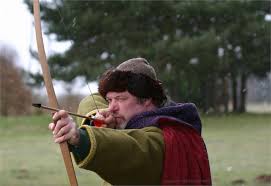 To harass the enemy while the army deploys. 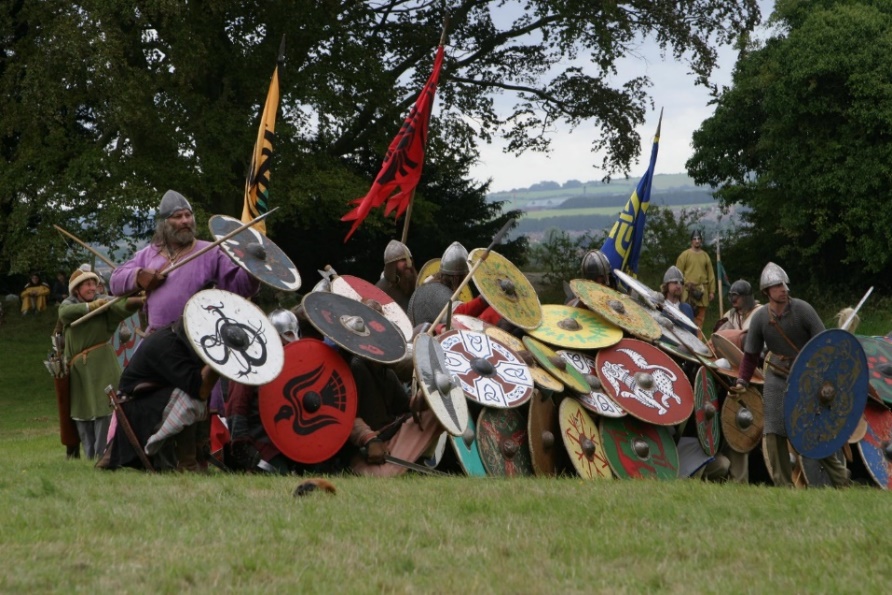 To harass the enemy while the units of the army redeploy. 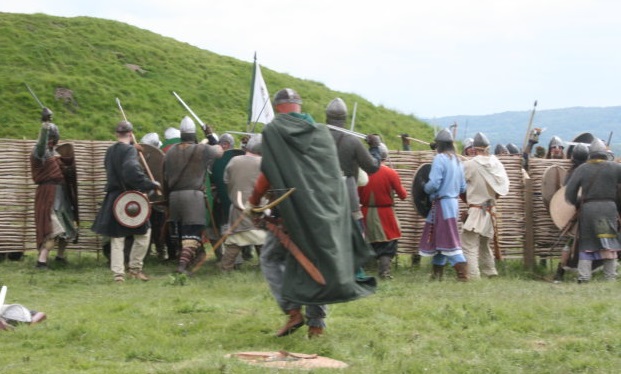 To harass the enemy as they advance. 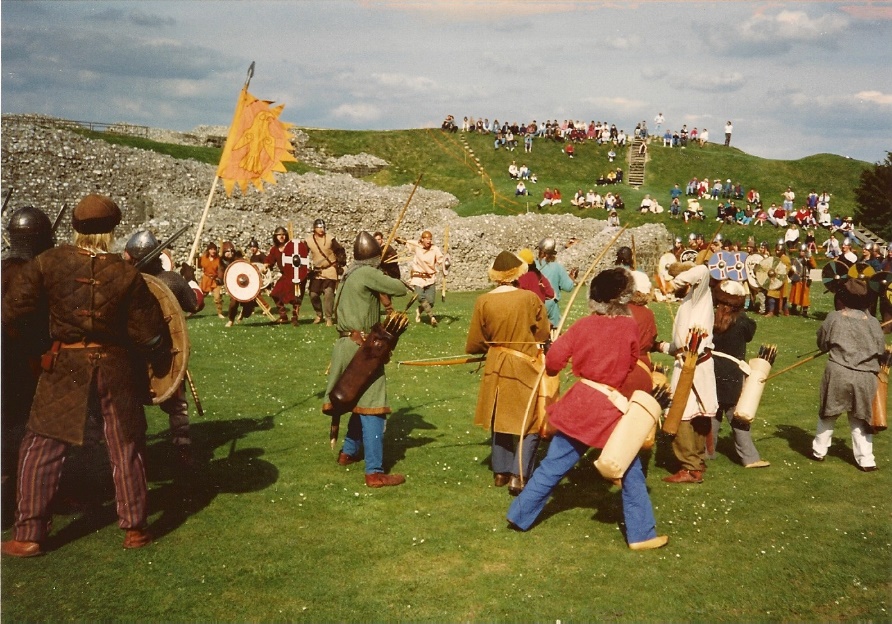 To prevent the enemy following up units, which are breaking contact with the enemy. 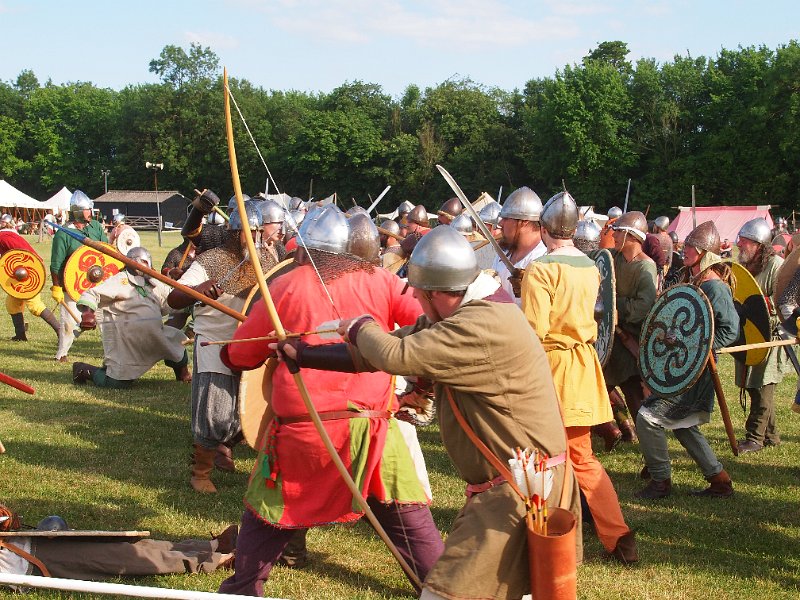 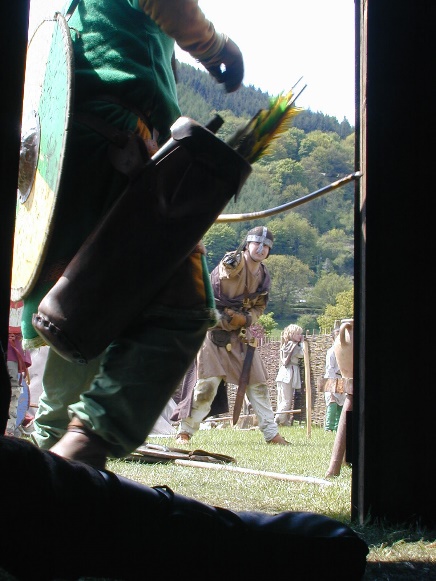 To engage and drive off the enemy skirmishers. 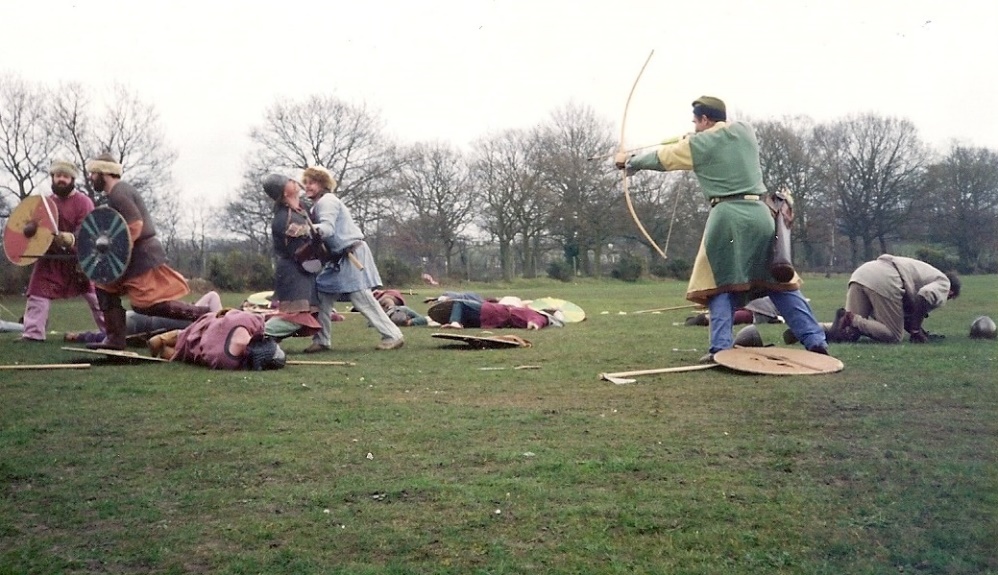 To engage and drive off the enemy missile warriors. 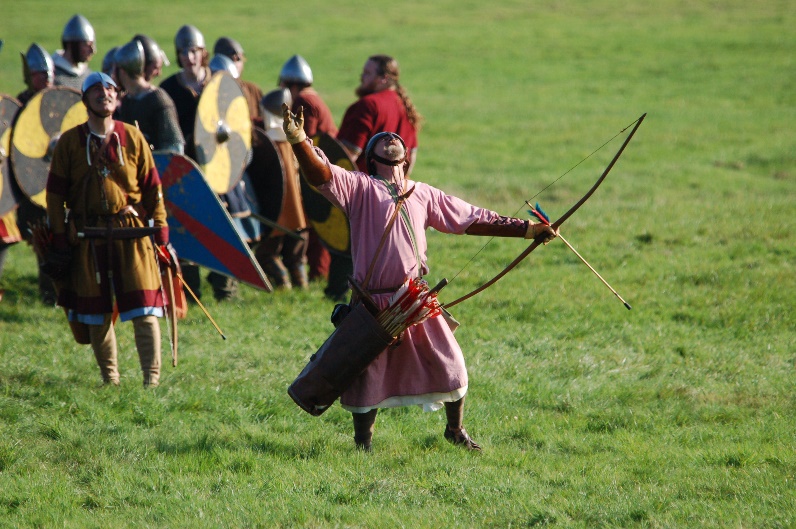 To engage and kill enemy leaders and commanders. 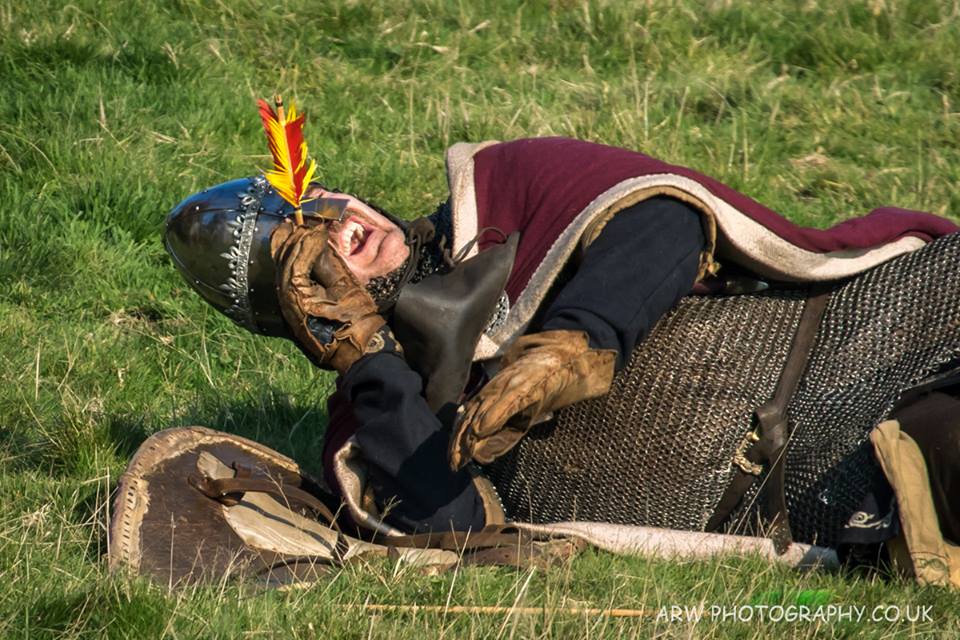 A single archer is a dangerous adversary, able to pick of a lone enemy at great distance, but a unit of archers working together is a devastating weapon that provides a formidable tactical advantage. 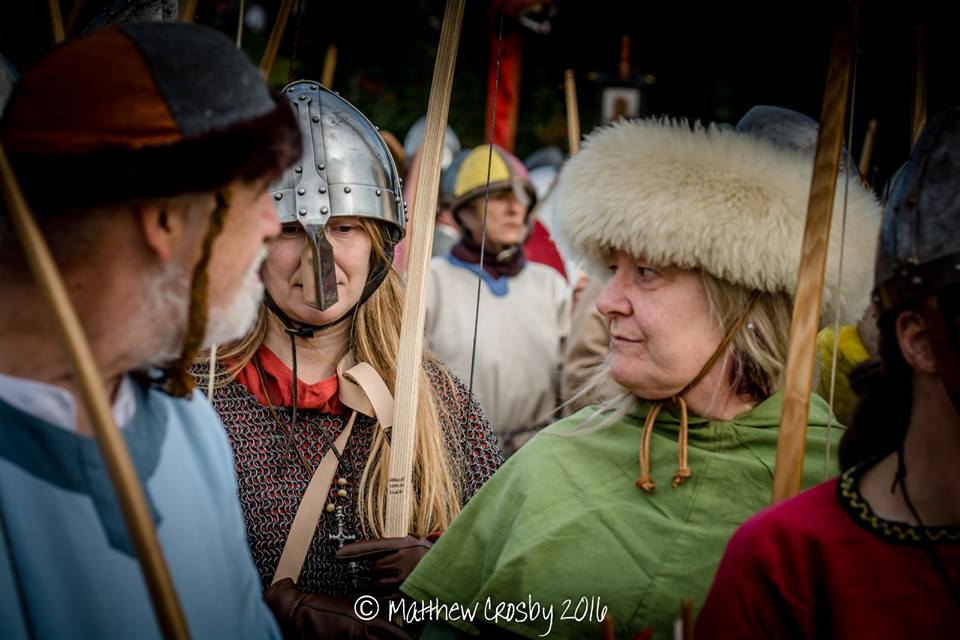 Most of the manoeuvres on the battlefield are the same for all warriors, some however have weapon specific variations. There are some archer specific commands and manoeuvres which are included here. Before a unit of archers goes into battle the unit leader must designate and make known the centre archer. The unit leader should take position on the left of the line (if right handed). This allows the leader to watch at the same time as shooting. 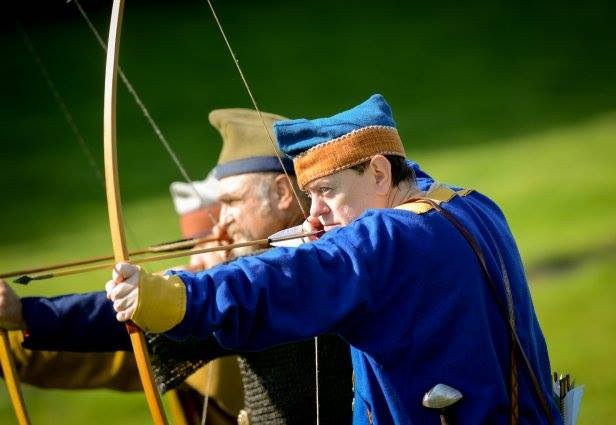 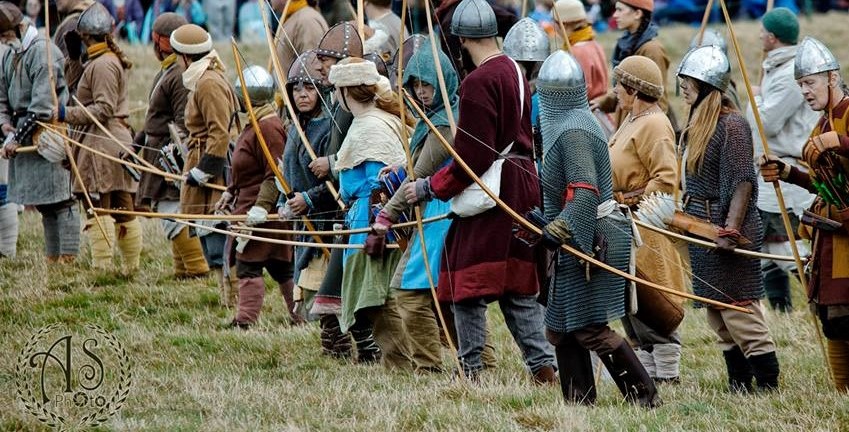 The unit is coordinated by a series of orders. Commands directed to all members of the unit start with the word “Archers…”

About turn Command: Archers, about turn! The archers stand in a line. On the command "about turn" they turn to the right 180o. Archers bring their bow upright so as not to strike another warrior with it.

Free Melee Command: Loose at will! At certain times in a scripted battle, archers are not required to operate as a unit. The Command “Loose at will” informs archers that they may move on the field, choose targets and loose individually 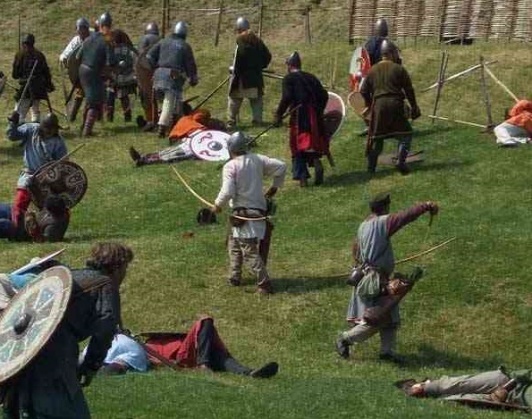 Open order The archers always form up in open order. They stand in a line facing the enemy an arms distance from the warrior either side of them. If two ranks of archers are ordered to extend the line they form a single line in extended order. The open order command returns them to their standard formation. 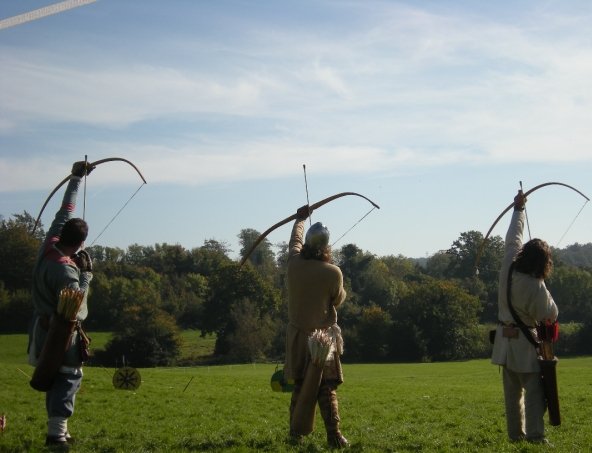 The first commands that an archer has to learn are:

Knock - fit an arrow to the string

Draw - Aim and draw the string back ready to shoot

Loose - Loose the string and launch the arrow

Stop - Stop what you are doing and await further orders

Archers will be notified of the angle of release by the unit commander. High angle instructs arrows must be launched at an angle of over 45 degrees. 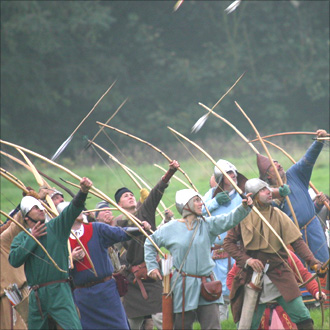 Low angle instructs arrows must be launched at an angle of under 45 degrees. 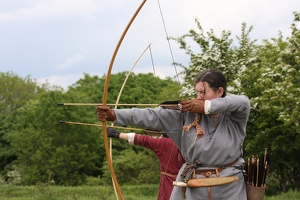 Working together as a unit by volleying gives archers the means to devastate the enemy and turn the tide of a battle as seen here at the 950th anniversary of the Battle of Hastings. 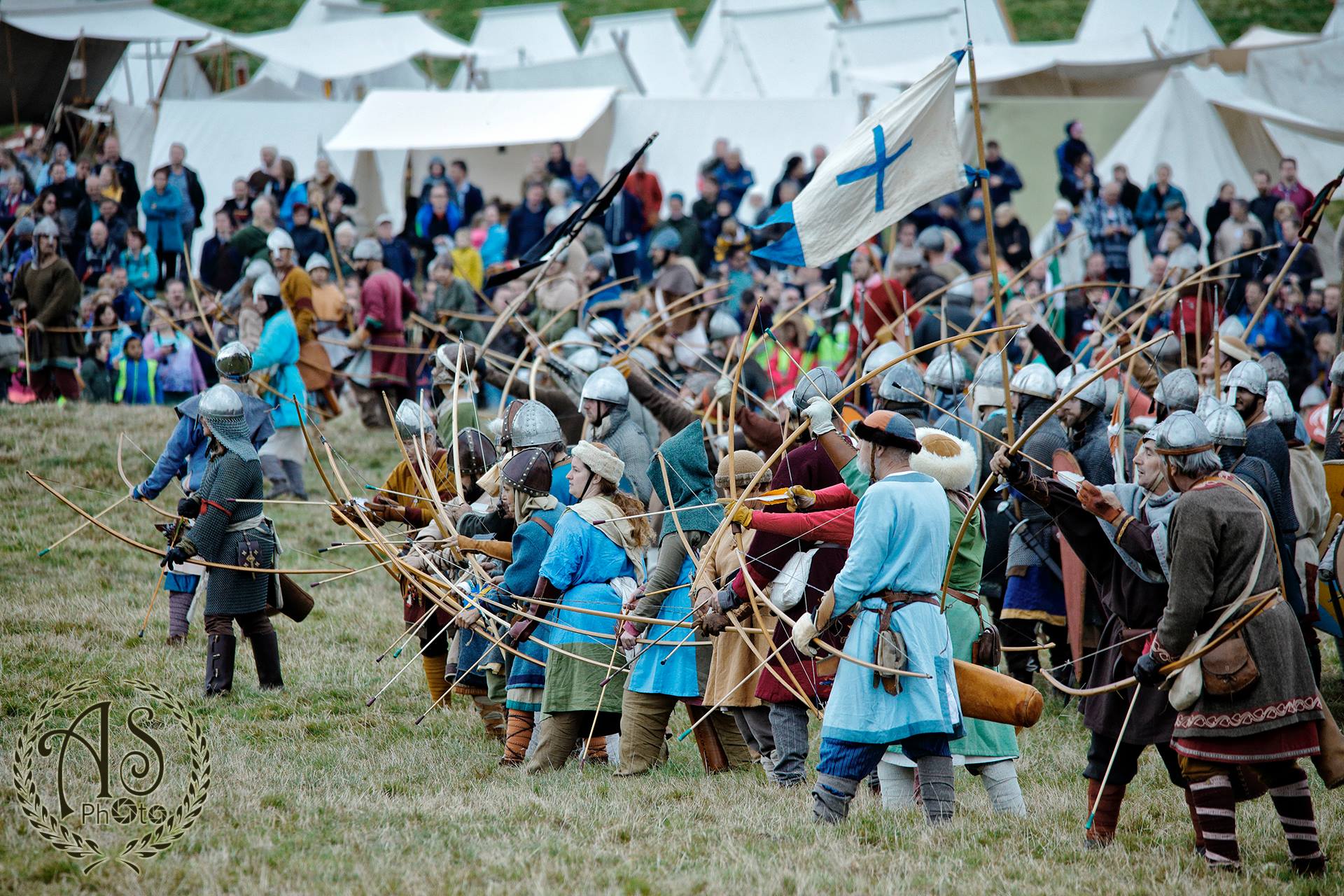 Sometimes volleys are staggered so as to provide a continual attack of missiles on the enemy. The archers stand in Open Order in a single rank one arm's length apart, at ease. On the command rolling volleys left or rolling volleys right they do nothing.

On the command nock they all fit an arrow to their bows.

On the command draw the archer at the end of the rank designated by right or left draws. They are the first archer.

On the command loose the first archer looses at the target then the next archer draws and also looses. Each archer continues in turn loosing at the target. When the archer at the end of the rank has loosed, that archer shouts gone and the drills above are repeated until the command stop is given. On the command stop the archers stop what they are doing and await further orders. Any archer unable to loose in turn, shouts miss and the next archer looses instead. Here is a rolling volley left. Note the archer at the end of the rank on the right is watching and will give the shout gone after he has loosed. 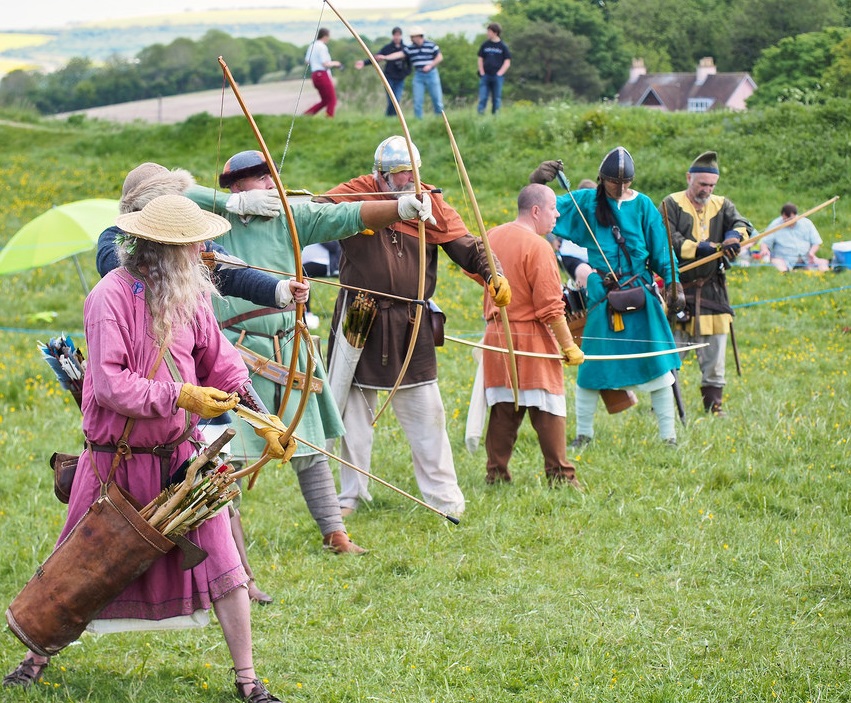 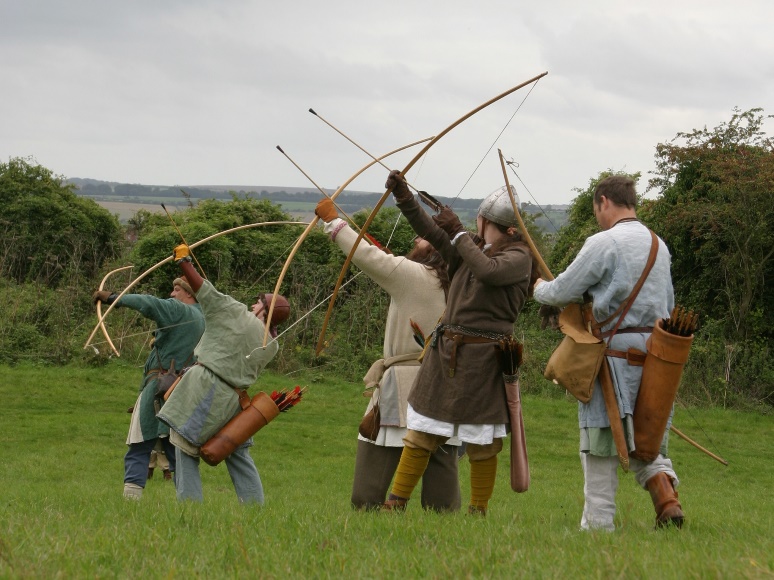 Sometimes a unit of archers want to maintain attacks on the target whilst closing distance. This can be achieved with volleys, with the ranks advancing after each release of missiles. The archers are commanded to form two ranks in extended order which is two arm lengths apart, at ease. On the command volleying, ranks advancing they do nothing.

On the command nock both ranks fit arrows to their strings.

On the command draw the front rank draws.

The command nock is no longer given and on the commands draw and loose the above drills are repeated. On the command stop the archers stop what they are doing and await further orders. 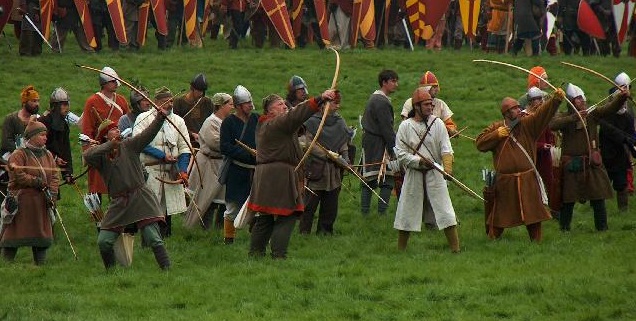 Sometimes a unit of archers want to retire in good order whilst maintaining attacks on the target. This can be achieved with volleys, with the ranks retiring after each release of missiles. The archers are formed in two ranks in extended order two arm lengths apart, at ease. On the command volleying, ranks retiring they do nothing.

On the command nock both ranks fit arrows to their strings.

On the command draw the front rank draws.

On the command loose the front rank looses together and then steps back behind the rear rank forming up two paces to their rear. As the rank retires they ensure that bows are held upright so as not to hamper the archers in the rear rank. They fit another arrow to their bows as they retire.

The command nock is no longer given and on the commands draw and loose the above drills are repeated. On the command stop the archers stop what they are doing and await further orders. 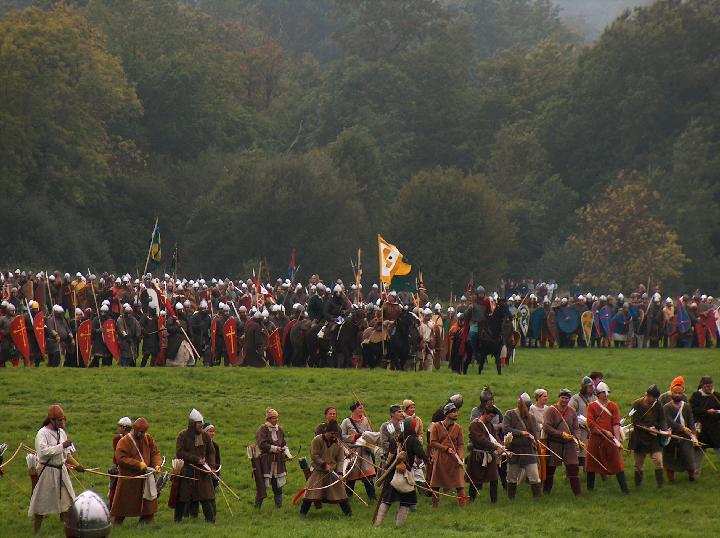 Archers must be able to string their bow quickly and efficiently, if you bow string snaps in battle you are no longer effective and must be able to re-string your bow. Naturally this assumes you have a spare string with you and no true archer will not have one with them, if you want to ensure that you are never without a spare string keep one in your quiver. Once the string is fitted to your bow the low draw weight of re-enactment bows them to be strung easily using a technique that is frankly not authentic, below therefore are two ways of stringing a bow, the one we can use and one that would have been used and should be used when performing as an archer before the public.

The bow string should have a loop at one end only, slip this over the upper nock. The un-looped end of the string should be tied to the lower nock, you will have to do this several times until you get the right length of string for your bow to have the correct bow window. The bow window is the space between the belly of the bow and the string, make a thumbs up sign with one hand and place the heel of your hand on the grip, the string should touch the top of your upraised thumb. Use a timber hitch to tie the string to the lower nock, this knot is easily adjusted when trying to work out the size of the bow window. 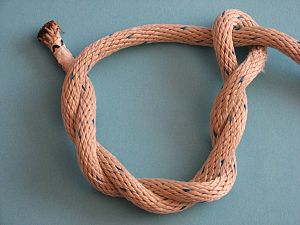 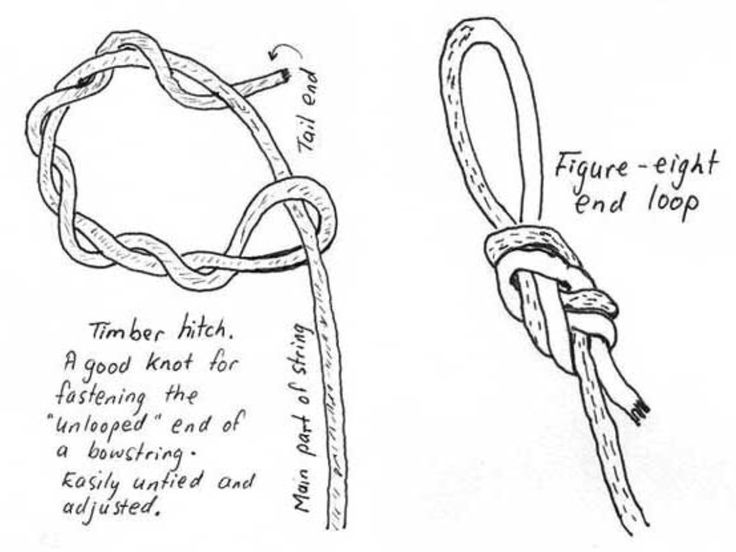 1. Place the lower nock in the instep of your right foot.

2. The loop should be on the bow, grasp the loop in your left hand and place it flat on the back of the upper limb.

3. Hold the middle of the upper limb with your right hand.

5. Keep going until the loop is fitted to the nock.

1. Place the lower knock over your left ankle.

2. The loop should be over the upper limb, slide the loop down and with your right leg step through the bow window so that the hand grip is behind your right knee.

3. Place your right hand on the upper knock and bend the bow over your right leg while grasping the loop and drawing it up to the knock.

4. Keep going until the loop is fitted to the nock.

Looking after your bow

If you look after your bow it may well last you a life time, I have had mine for over 25 years. Below is some advice on how to look after you bow. 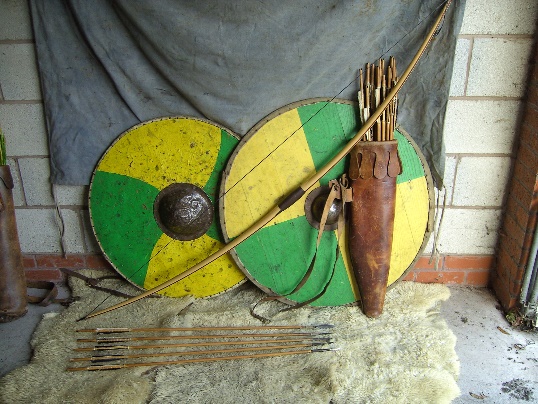 Don’t leave it in a hot car

Don’t leave it in a very hot/damp/dry environment over winter/when not in use.

Warm it up slowly by stringing it and repeatedly drawing it - very gently, lightly and small draws to start with, gradually increasing these until you can make a full draw.

Don’t use your bow to defend yourself with, it is not a shield OR a spear!

Unstring it after use

Composite or 'recurve' bows made of wood, sinew and bone or antler were common on the steppes of the east and in the Byzantine and Islamic worlds. They are evidenced at eastern Viking sites, such as Birka and possibly in the Norman arsenal. They should be restricted to Rus characters.

For the latest information and rules on Missile combat, consult the The Missiles Officer's Training Handbook

For more unofficial guidance on all of the above, consult the Archers Handbook.