Neckrings closely resemble armrings in style and manufacture - they are manufactured in silver, gold and a few examples in iron. They come in narrow decorated bands secured into a hoop by a hooked clasp. Far the most common style of neckring is that of the twisted silver variety - gold is very rare - made up of more than one rod of silver they are twisted together and taper into forged ends which are usually fastened by a hooked clasp arrangement. The average diameter of the neckrings comes in at 12.84 cm - quite adequate for most men and is the equivalent of a 16” chain.

There are a significant number of finds, and only a few examples from each region are presented here to illustrate the variations in design.

The finds from Gotland need special mention. As with many other items from Gotland, they fall outside the norm of finds from the rest of Viking Scandinavia. This goes for the group of copper alloy neck rings, which look stylistically like the neck rings found further East in the Baltic countries. [6],[7],[8],[9]. Apart from the complete examples shown here, a hoard of 20 kg of bronze scrap containing many fragments of rings were found in the same field as the famous Spillings silver hoard.

One find from Sandby on Öland needs special mention[10]. It is four rings similar to the Grötlingbo ring from Gotland, but they have been twisted into arm rings. From silver hoard finds in the UK several hack silver pieces can be identified as parts of this type of ring. 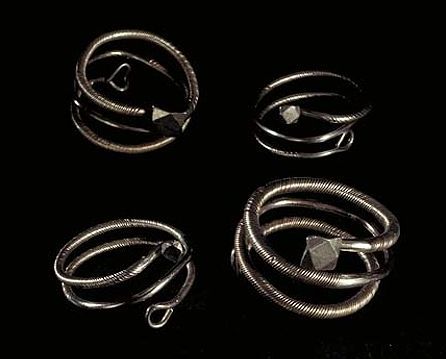 The Norwegian database contains close to 100 different neck rings. Most of them are in silver, but there are a few gold ones from Flekkefjord[11] and Viken[12],[13]. There are several of a very simple design of three thick wires twisted together, like the example from Nordland[14]. There are a few braided ones like this example from Trøndelag[15]. Finally there some very complex ones combining thin and thick wire in a twisted pattern like these two examples from Troms[16] and Vestfold[17]. By far the most common closing mechanism is by two hooks.

The hoard from Vester Vedsted [18], near Ribe in Denmark contains two of the otherwise rare gold neck rings. The hoard is dated to the last half of the 10th Century. The large gold neck ring rom Tissø[19], on Zealand in Denmark is unique, it ways in at just under 2 kg. Other finds are the more usual style made in silver. They are either braided, like the Rømersdal hoard rings [20], or made from twisted wires like the Østermarie[21] and Terslev[22] finds.

A type found in Sweden and Russia is that of the Thor's Hammer Ring, which consists of a partly twisted iron rod made into a neck ring - to this is added small Thor's hammers or sometimes rings or spirals. The Thor's hammers on these rings are often very crude and could actually be representations of spades or clubs, though they are normally seen to be Thor's hammers.

There are many styles of neckrings available for sale, but unfortunately most of them do not resemble the finds. There is no evidence for the use of Celtic Torcs with the doughnut shaped terminals. Another common model is a thin twisted wire ring with woolfhead terminals. This is based on enlarging one of the Gotland bracelets and is pure fantasy.

What neckring can I use with my kit

Invariably the style seen in all regions is a twisted or braided wire construction terminating in solid plates with a double hook or hook and loop closure. By far the most of the finds are made from silver and a few are made from gold. This is the construction that should be used. The bronze neckrings from Gotland appear to be from a different culture, and are similar to finds from Finland and the lands of the Slavic tribes. This style should not be used.