Ranks within the Society

Promotion within the Society is purely voluntary - if you wish to remain a Thrall for 20 years, that is entirely your decision. However, many members enjoy the opportunity to demonstrate the skills and crafts they have learned, and to win awards for doing so. The ranks system, and the awards which come with it, allow them to do this. It should be noted that we do not expect you to dress to your rank, but rather to the character you are portraying at the event - a Thrall may dress as a Bishop if he has all the appropriate kit and knows enough about the office to be convincing.

Everyone who joins the Society starts as a Thrall, who is busy acquiring kit and learning a first skill. You must pass a Basic Combat or Archery test before being allowed to fight at a public event but may take part in Village (LHE) activities, under supervision until you pass the Basic LHE Skills Assessment.

A Fri-hals needs to possess a basic set of costume, have passed a basic skill assessment (usually combat, village or acting) and can take full part in a show (subject to individual weapon restrictions).

When you become a Fri-hals, you are awarded the Fri-hals Axe

A Drengr has passed a number of skill assessments (to a total of 7 points), passed fairly detailed checks on 2 sets of kit, attended a minimum number of shows and generally impressed their Group leader (or Provincial Members Co-ordinator) to the point where they are willing to nominate them for promotion. The award, the Drengr Hammer, is then generally made at the next banquet. It typically takes five years to earn the Drengr.

Thegns are officers either within a Group or holding a Society position. After a minimum of 2 years exceptional service, they may be awarded the rank of Silver Thegn, a rank which they retain, even when they are no longer fulfilling the officership. 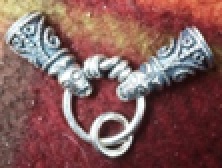 A Jarl is an officer, either the leader of a group or someone responsible for a particular area of Society activity such as combat training or Health and Safety. After a minimum of 2 years exceptional service they may be awarded the rank of Silver Jarl. Jarls who do not become Silver Jarls will retain their previous highest rank if they resign from the Office of Jarl. Silver Jarls retain the rank, the right to attend Jarls meetings and a vote at the Jarls meeting.