Spinning is the process of turning loose fibres into thread. This may be wool or plant fibres such as nettle, hemp and flax. Flax is used to produce linen. It was previously believed that hemp was used only for coarse textiles (i.e. rope and sailcloth), but recent evidence suggests it was also mixed with wool for finer work, such as wall hangings. Spinning was done entirely by hand (the spinning wheel was not invented until later), and by tradition, was women’s work. In his will, Alfred the Great described his female relatives as ‘spinl healfe’ (spindle side), from which comes the word ‘spinster’. It must have been a fairly constant occupation for all women except perhaps those of the highest status since the hours spent on preparing wool for weaving were probably about 10 to 1. It is worth noting that it took a skilled modern spinner some 500 hrs to spin just the warp threads to weave a replica of a man’s kyrtle found in Scandinavia. 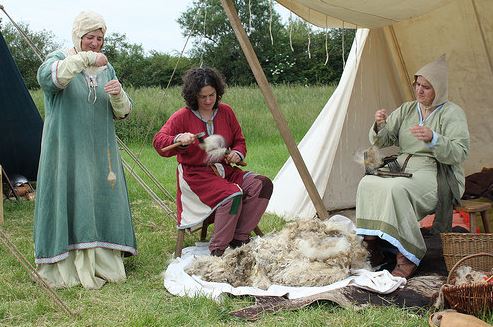 Before spinning, the wool fibres need to be prepared. This could be done with fingers, but wool combs are more effective and were in use from at least the 7th century. Combing the unspun fibres to lie parallel gives a strong, hard thread essential for warp and weft threads on a loom. (Carding, i.e. teasing, makes the fibre lie all which way and results in a soft, fluffy thread of the type used for modern-day knitting). 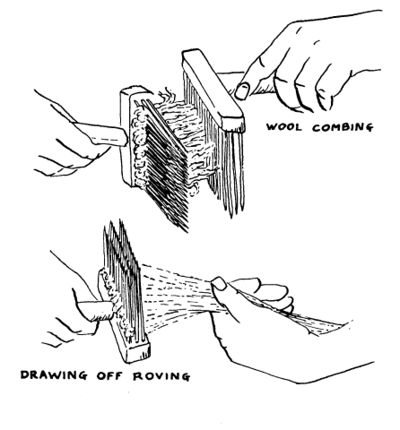 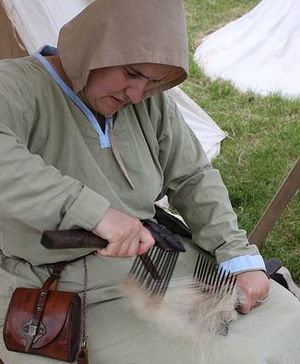 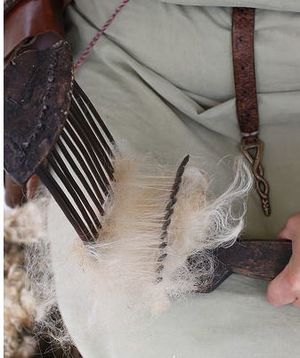 Woolcombs were used in pairs, with each holding two rows of iron teeth set in an iron bound block of wood and attached to a wooden handle. The process separated the long fibres from the short ones which were left at the base of the spikes, as well as aligning the long fibres ready for spinning. One found in Coppergate had two rows of 93mm-long teeth, and a site in Essex has produced what may have been woolcomb warmers. Heating the combs would assist in melting the lanolin to make the process easier.

A tool known as a teasel gig used teasels instead of iron teeth and was used to raise the nap in fabric to give a fluffy surface. Teasel gigs are sometimes confused with combs, but they were used for finishing the woven cloth rather than for preparing the fibres.

In the 10th century the spinning wheel was unknown and the common tool for spinning was a spindle.

Spindles come in many types. The most common spindle used by re-enactors is a low whorl drop spindle. This has a spindle, or rod, which should have tapered ends and a bulge in the middle. A circular weight with a hole in the middle is slid onto the spindle and held in place by the bulge. This weight is called the whorl or spindle whorl and acts as a flywheel to make the spindle keep spinning longer.

When the yarn had been spun it could then, depending on its purpose, be plied into thread. Plying (spinning two or more yarns together) not only stabilised the twist of the yarn but also gave a stronger end product resistant to friction.

A skeinwinding ‘niddy noddy’ and a reel (swift) were found in the 9th century Oseburg ship burial, and there is no reason not to suppose that the Anglo-Saxons used them as well, the more so since ‘reol’ and ‘gearnwinde’ are listed in the Gerefa as ‘towtola’ (textile tools). Once the wool had been combed, it would have been rolled into a loose ‘roving’ which could then be wound around the distaff (wull-mod).

Wool is the easiest fibre to spin and is recommended for beginners. To prepare the wool for spinning it is best to comb it, or to tease it by hand into a loose fluffy cloud of fibres.

These instructions are for right handers, reverse for left handers.

With your right hand give the spindle a firm twist. If you have ever used a spinning top it is the same motion - right 2 fingers and thumb grip on opposite sides of the spindle, your fingers move quickly one way and your thumb quickly the other giving the spindle a quick snap to get it turning fast.

As the drop spindle spins it will put twist into the leader yarn. pinch the yarn at the top at the point where the leader and the fleece overlap then move your left hand back a bit and draw out a little of the fleece (about 3 to 4 inches, 8 to 12cms) into a stream of fibres. Pinch the drawn fleece with the left hand and then relax the grip of your right hand allowing the twist from the leader yarn to run up into the drawn out fibres. The drawn out fibre should twist together into yarn.

Spinning with a drop spindle

Continue twisting the spindle, drawing out fibres and letting the twist run into the fibres until you have so much yarn that the spindle is hitting the floor. Then wind the yarn you have just spun in a figure of 8 around the finger and thumb of your left hand to temporarily store it. When your winding reaches the spindle hold the spindle in your left hand and use the right hand to undo the half hitch on the end. Now you can wind your new yarn around the spindle. Leave about a foot unwound, this will be your new leader. Secure the thread with a half hitch at the top of the spindle and you are ready to continue.

Carry on twisting the spindle, drawing out fibres and allowing the twist to run into them. Whenever the spindle reaches the floor wind the new yarn onto the spindle.

Most 10th century spindle whorls that have been found have been relatively small and compact (see for example Andersson, Eva, 2003 "Tools for Textile Production from Birka and Hedeby", Birka Studies Volume 8). In contrast modern spindle whorls are much larger wider and flatter. 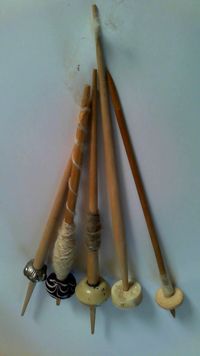 Some examples of drop spindles used in 10th century re-enactment are shown above. The spindle whorls are in a variety of materials and shapes, but all are fairly compact. This means they spin fast and are efficient for producing thread. The glass spindle whorl is based on a find that may possibly be a large bead, but it works well as a spindle whorl. 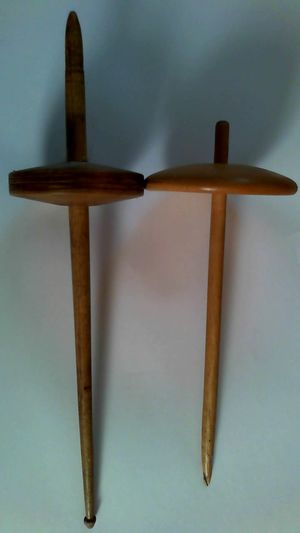 Some objects have been found which could be wide spindle whorls, but they are much less common than the compact whorls and given that they spin less efficiently they might possibly be flywheels from pump drills rather than spindle whorls.

Credits: with thanks to Jennifer Bray and Georgina Riall.