Characters: Participants will play the characters that they normally have in the Vike. They will be allowed to use whatever weapons that they are allowed to under the Society Combat Rules. 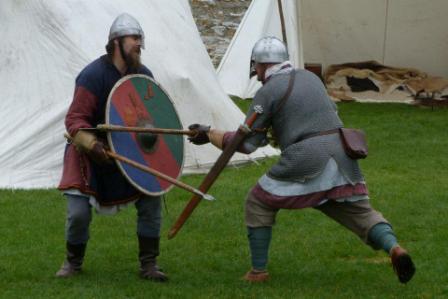 Combat rules will be those normally used in the society with the following amendments:

Note: If armour is subject to the current armour rule as stated in the Society Combat Rule then the above amendments apply.

Hit Points: HPs only for monsters, characters and other humans as normal Vike rules. Monsters don’t act wounded after the first hit as humans do, they will fight until they have used up all their hit points then die.

When a monster losses a HP it should say "ouch!" This is to help the characters to work out which weapons do damage, see below. 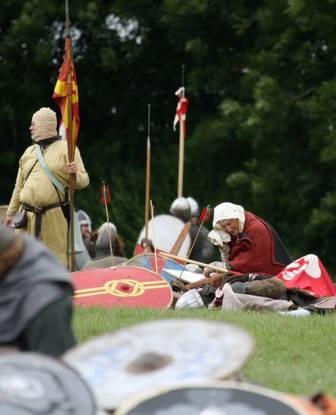 Each Character has three LPs for any given adventure. When a Character has been "killed" and fallen to the ground they must be revived within five minutes of the end of the combat, or they may be revived during the combat; to do this:

· They must be dragged or carried clear of the combat.

· They must be tended by another Character for one minute.

· A bandage must be applied to an appropriate part of their body and must be worn for the remainder of the adventure. (This reduces the record keeping needed by the Referee and adds to the feel of the Adventure.)

· They must be revived within five minutes of the end of the combat and will lose one LP.

· If they are revived between ten and fifteen minutes they lose three LPs and are dead unless they have acquired additional LPs during the adventure.

· To be revived at least one Character must have survived the combat or some other Character has arrived in time to revive them. Note: In normal circumstances this means that a Character may be revived twice, the third time they are defeated in combat or lose an LP to a trap (see below) they are dead.

The Enemy: Colour Codes: These make it possible to designate a specific being without the need for complicated costumes. 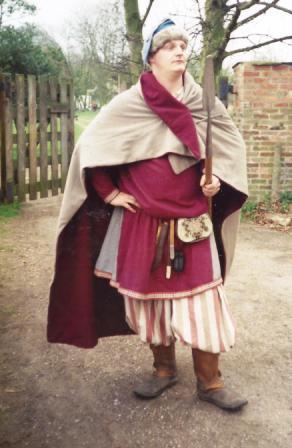 Humans conform to the same rules as the Characters but may have less LPs at the discretion of the Referee. This allows the Characters to defeat a human enemy and then revive them for interrogation, enslavement etc. Social status or career can be indicated by the use of accents, EG peasants and villagers might use a rural West Country accent, bandits a cockney accent, clerics an Oxbridge accent, nobles a "posh" accent and so on. 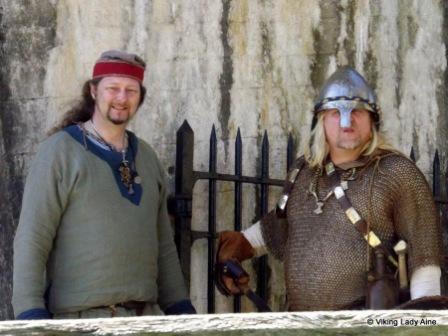 · Can only be hurt by spears.

· May not use spears or missile weapons except boulders at least two feet wide!

There are many different types if troll and information on the can be found in the Troll Guide, however there are three subclasses of troll:

Troll Guard: much the same as trolls but mission oriented, ie they like to guard something.

· Can only be hurt by spears and axes.

· May not use spears or missile weapons other than rocks

· Cannot be hurt by seaxs or knifes.

· May not use spears, long axes or missile weapons other than small rocks.

· As humans but may have some additional characteristics the variety of which are to numerous to mention! 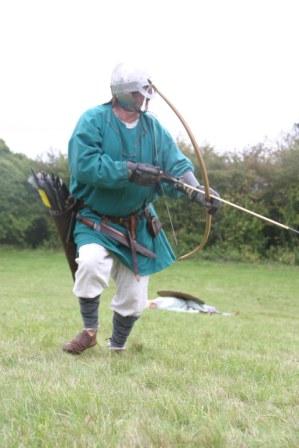 Intelligent and mischievous. Not actually evil but they have no particular fondness for humans!

· If hit by an arrow they die immediately.

· Missile weapons are preferred by Elves.

· Speak with Welsh accent and phrases.

Grey Elves (Alfer) These elves are aligned with neither good nor evil and are mischievous forest spirits. They will not stray far from their Elf Sign as if it us destroyed they become vulnerable and easier to kill.

· If hit with an arrow while vulnerable they die immediately.

· The larger ones prefer missile weapons; the smaller simply use magic.

· May not use seaxs or hand axes.

· Speak with Irish accent and phrases. 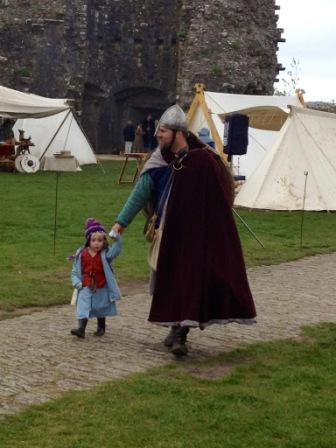 Also known as Jotunkin. Very intelligent and cunning and greedy. Turn to stone if caught in direct sun light.

· Spears and long axes have no effect.

· May not use long spears, great spears or long axes.

· Speak with Scots accent and phrases. 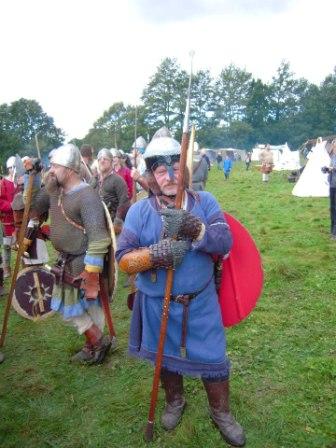 The Asgardian dwarves are known as the Dark Elves and are incredible workers of magic – just four of them hold up the world! And they have fashioned all of the weapons of the gods.

· Spears and Long axes have no effect.

· Prefers not to use long spears, great spears and long axes. May carry a Thor like hammer.

Snow White Dwarf This Jotunkin has a stronger line of dwarvish blood and has inherited some of its dwarven forebears magic, as well as more of the power of the Giant. Often will wield enchanted items and cast spells, favouring Life Leaching spells.

· Spears, seax’s and long axes have no effect. 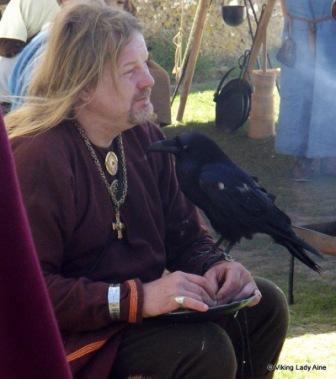 · It's probably all over, hit with what you like and hope for the best.

· May use whatever weapon they want.

Wights Slain warriors that have been cursed by a Troll Stone or some other evil and are not welcome in Odin’s Hall nor the Underworld. They are slow, silent (apart from a gasp if they take a hit) and stare wide eyed. If they possess weapons they will use them to attack warriors to spread the curse. Otherwise they will try to strangle. If a warrior is wielding a weapon or if he carries a blessing from the appropriate religion they do not attack.

· Can only be hurt by axes and swords.

· When killed, they normally rise again after 30 seconds until the curse if lifted.

Dwarven Wight Even more terrible than the Wights. They will attack anything and everything.

· Can only be hurt by axes and swords.

· When killed, they normally rise again after 30 seconds until the curse if lifted.

Languages: All spoken languages will be Modern with English as the local common tongue. Other Modem languages may be used if non-English speakers are available.

Writing: All writing will be in Runic script, or other North European Early Medieval script, but in a Modern language. 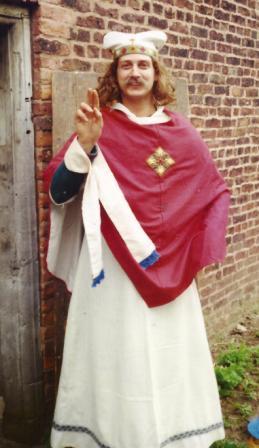 The Characters will not be informed whether or not the spell/curse/blessing has worked unless it requires some action from them such as falling down every fourth step! Characters should remember that they believe in this sort of thing and if they are convinced by the performance of the Priest/Godi then they should act accordingly without reference to the Referee.

Where a spell/curse/blessing has been cast upon a weapon or warrior and is to affect their combat then the "Enemy" should be informed as to the effect and act accordingly:

EG 1 A warrior has been given a blessing which protects him/her from blows in his/her next combat, the “enemy” will be instructed to fight them but will not land any blows.

EG 2 A warriors sword has been cursed and will not hurt any of the “enemy” in future combats, the “enemy” will ignore all blows from the warrior with that weapon.

Life Leach: Requires lots of arm waving, concentration and foul cursing to cast. When cast it weakens the life force of the single recipient by 1.

Traps: Any trap that might result in injury to the Character causes a "kill" costing the Character one LP assuming they are revived. When a trap is sprung upon a Character they must act in the same manner as they would have had they suffered a "kill" in combat.

Referee: The Referees job is to control the flow of the adventure and ensure that the “enemy” are briefed on what special actions they may have to take due to the Characters actions. The Referee and Characters are not to communicate with each other except:

Where the Referee feels that a spell/curse/blessing has had an effect before the Character comes to this opinion.

To confirm to a Character the effect of a trap.

The Referee is to keep track of time and inform the party if they have failed to revive another Character in time.

The Referee is not to give any explanation of objects found or the actions of the "enemy" during the adventure. If the object does not fit with the Viking Age it should not be used and if the Characters do not understand it then it is their loss.

Role Playing: The aim of the role play is to develop the character and back story of your Viking Age persona so you should try to act as you believe your character would at that time. At all times once the adventure has started the Characters must use Viking names and act appropriately for the Viking Age. They must do as they are told by Characters who have the authority to order them about, e.g. a Godi may curse them and make them carry out a given action which they must do. If the individual concerned feels that this action is unacceptable to them in a Modern context, they should use Modem names and state that they will not carry that action out. If the Referee is present they should tell him/her. (The safe word is "Stop").

If any accident occurs or the Character feels that some action about to take place is unsafe, they should use Modern names and inform every one of their opinion. 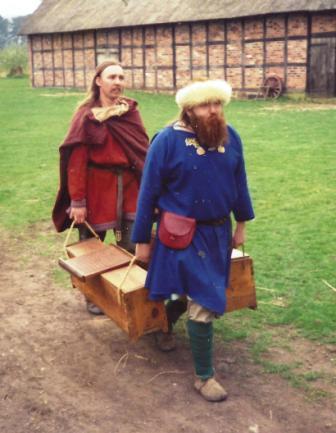 No equipment may be taken and used on an adventure unless it was available during the Viking age. Some Modern alternatives may be used due to availability of the authentic items or cost. E.g. Hemp rope instead of linen but not nylon.

No sharp knives are to be carried but an adventure may require the use of such at some point. All sharp weapons and tools must be carried by the Referee but must be matched by the equivalent Combat Safe weapon or tool carried by the Character.

Remember that treasure has weight as well as value.

Progression: There are no levels that a character can progress through; there is no way of gaining extra HPs permanently and no way of gaining extra skills artificially. A Character gains abilities by hard work, a Character can either fight well or not! A Character can either solve puzzles or not! As Characters gain in experience and get more competent at adventuring, the Referee will make the adventures harder and strengthen the “enemy”. Prestige gained will be by word of mouth, if a Character is really good someone may write the story of their adventure and publish it in the Runestaff.