The white boar of Vanaheim 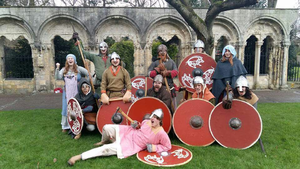 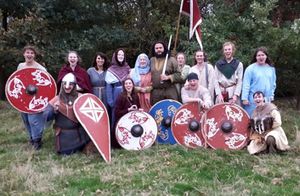 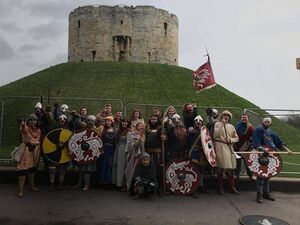 Vanaheim (Old Norse for "home of the Vanir") is one of the Nine Worlds and home of the Vanir, a group of gods associated with fertility, wisdom, and the ability to see the future. Vanaheim was founded in early 2015, by several society members attending the University of York, just in time for that year's Jorvik festival.

Originally focusing on establishing a solid combat contingent, Vanaheim has expanded over the last few years to include a burgeoning living history encampment, and has seen it's numbers swell. Though the membership is mainly composed of young adults, we have members of all ages. Furthermore, the group boasts a range of craftspeople.

Based in York, Vanaheim's meetings are mostly on the University of York campus, though our membership come from all over the North Yorkshire area.

As part of The Vikings, Vanaheim trains for combat using the rules and weapon regulations set out by the society. Under these rules we teach individuals to fight with shield, sword, hand axe, and spear. Advanced weapons include long spear and the dane axe. We also provide training in archery and slinging.

A small and young group, we only have one combat officer, though thanks to having several experienced combatants there are more than enough people able to chip in and help with combat newcomers. Training twice a week, on Wednesday evening & Sunday afternoon, we utilise space within the University of York. This allows for not only Vanaheim members, but those from other groups to attend, thanks to the large spaces. We are able to use indoor rooms during the cold & wet months, and also have access to large outdoor spaces throughout the warmer months.

As previously stated, Vanaheim started focusing on developing it's combat contingent, but has swiftly grown to include living history. With two tents owned by the group, and others owned by individual members, the group is capable of establishing a small encampment to portray the day to day life of a group of travelling Vikings. Vanaheim is lucky to have a large contingent of nuns, as well as seamstresses and embroiderers.