Men's belts are made of leather, usually between 1/2" to 1" wide. Wide "weight lifter" belts are not permitted. The leather should not be thicker than 2 mm, and belts made from 1 mm leather folded double and stitched are encouraged.

The width of your belt will be determined by the belt fittings. All belts should have a buckle, though a strap end is optional, however these are most commonly associated with baldric belts (for hanging swords) rather than belts worn as part of normal clothing. Matching strap end/buckle pairings are even rarer.

They may also have decorative plaques depending on the cultural background of your character. Painted and other decorated belts are pretty much unknown from the period. Extensive tooling and painting appears to be a post-Conquest fashion.

The belt is typically worn by reenactors as below, with the strap-end hanging down from a simple knot, often on the left hand of the body between the sword and the seax. However, we're still looking for confirmatory evidence of this before the thirteenth century - if you have any, do pass it along. In the meantime, please note that it may well be a reenactorism.

Buckles were generally made of three pieces, ring, plate and pin and although double pins are rare, buckles with no pin at all are equally well known. 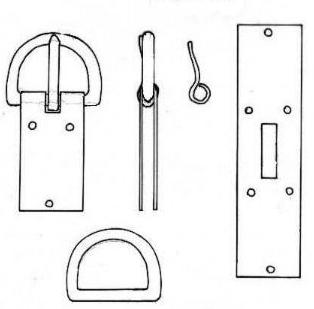 Metal buckles have been found in both yellow and orange bronze, as well as iron, pewter and silver. They may be quite plain, but the casting process is similar for more ornate designs, so higher status characters will normally have decorated designs. "D" buckles of metal however are exceptionally common and seem to be almost the standard. As so many metal buckles have been found, and as many were very simply made, there is no reason why lower-status characters should not use metal buckles.

The buckle may be attached simply by folding the strap back on itself, cutting a hole for the tongue, and sewing the strap to itself trapping the buckle.

Alternatively, a U-shaped metal plate can be riveted through the belt to attach the buckle. 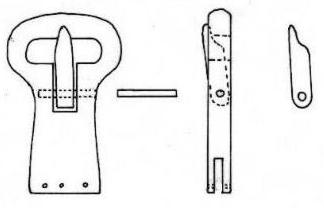 Belt fittings made from organic material such as bone, antler and horn are an alternative to metal, though they do not appear to be especially common.

Bone and antler buckles seem to have been more popular in the late antique period (4th/5th centuries) and fallen out of fashion in the fifth/sixth centuries. Perhaps a dozen bone/antler buckles have been found from early medieval Britain and Ireland, whereas on the Continent they are better represented early on, but as relatively high status items containing relics.

Some of the bone/antler buckles were found in excavated cemeteries, where at most 1-2 bodies had bone buckles out of dozens or hundreds of burials, indicating they were not common.

Organic buckles had the ring and plate cut out in one piece. The pin was separate and pivoted around a small metal insert. Small holes bored in the base allow the buckle to be sewn onto the belt.Quite a few of the known bone/antler etc buckles do incorporate metal elements (fixing plates, tongue and so on).

As noted above, strap ends are more commonly associated with sword belts. If used, the buckle and strap end should both be of metal rather than bone/antler.

Strap ends made from organic materials will usually be sewn on. Metal ones may be sewn or riveted on.

Belts may be decorated with plaques and/or studs. This could be a matched set or a mixture of designs, and was a way for the well off to both demonstrate and safely transport some of their wealth.

Tooled and painted belts should be avoided. This style of decoration was extensively used on knife sheaths, but does not appear in the equivalent belts and straps found in the archaeological record (for example in York and Dublin).

A belt fragment decorated with tooled parallel lines was found at Buttermarket, Ipswich, dated to the 6th or 7th century. It is possible that such simple decoration was used in our period (though we have no evidence for it); it is not encouraged.