Leather items are widely decorated; the style technique and extent of decoration varies between items. Seax sheaths of an English design are for example universally decorated with tooling, whereas English sword scabbards appear to be mostly undecorated.

Tooling is by far the most common way of decorating leather. It is simple to perform, and requires little equipment. Briefly this involves wetting the leather and using pressing a hard but blunt object into the surface to create a pattern or design. Decoration should not be carved or cut into leather as this compromises the surface and there is no evidence for it.

Embossing is a similar technique to tooling except it is done from the flesh side, pushing the grain side up and adding to the three dimensional nature of the design. It is often seen in seax sheaths, notably on the Aachen sheath. It is a very difficult technique to undertake.

A design is laid onto a hard surface and then the leather is pressed over it. This technique is more popular in early Anglo Saxon products, but is also seen on some sword scabbards throughout the period, these scabbards are from Scandinavian contexts implying a continued tradition from the scabbards depicted on the helmet plates from the Vendel period. For an example see the Cuthberts gospel.

This topic is controversial, it has become popularised in re-enactment that items of leather kit have painted designs on them. The only example of dyed and painted leather is found in book bindings. Three surviving finds exist in good enough condition they can be examined. The first is the gospel of St John from the coffin of St Cuthbert dates from around 687 it has survived in incredible condition. The binding of the gospel is a tanned goatskin, which has had a surface stain applied. This stain is probably sumac, and the skin itself was almost certainly imported from sub-Saharan Africa after being produced in northern Nigeria: it was a specialist bookbinding product, and there isn't another recorded example of it in northern Europe until the late fifteenth century (Breay & Meehan 2005, p.52). It definitely should not be taken as being a common, easily-replicated material for the wider Viking Age. The leather has been pressed and glued over a relief on a birchwood backing, picked out with tooled decoration and painted detail in blue, yellow and possibly silver. The leather has been stained a deep crimson. 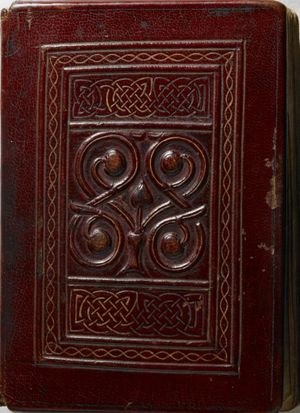 The Cadmug codex (7th c) and the Codex Bonifatianus 1 (8th c) are the other two, they do not survive as well. The former is similar to the gospel of St John in type and colour. The latter is simpler, though still dyed red, with courser leather and stamped decoration. Extrapolating this to other products is difficult, but there is certainly no evidence for paint or dye on any seax sheath or sword scabbards. The leading expert in early medieval leatherwork, Esther Cameron says "...No dye has been detected in leather of pre-Conquest date from an archaeological context" (Cameron 1998, p.49). There is no evidence for painting leather for things such as scabbards or sheathes until the twelfth century, where dying is seen, too.

Modern leather is often “chrome dyed”. It is soft, flexible, cannot be tooled, is slightly shiny and is often dyed in a wide range of colours. It is NOT suitable for Dark Age kit under any circumstances.

The use of natural brown colour dyes on leather is acceptable, however treating vegetable tanned leather with oils, particularly mineral oils stains and darkens the leather anyway.

This category has only the following subcategory.

The following 8 pages are in this category, out of 8 total.