Commentary by Paul Murphy to accompany the panel displayed at Vikefest 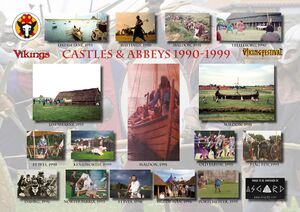 The beginning of the 90s marked a new era, as Geoff Carter stood down and Chris Robinson of Danelaw took over as the leader of the society. Chris had been the society’s training officer and 2-i-C for some time, and so the transition was relatively simple. However, as all of the High Council had historically come from the group of the leader, that meant a complete change at the top – though Chris made several appointments from outside of Danelaw in the first move to a wider level of involvement. Although Chris led the society for only four years, his impact was significant in putting in place many of the structures which have enabled the society to grow since. After some preparatory work, 1990 saw the society invited to the English Heritage event at Hastings for the first time. This was the beginning of a long association with English Heritage that saw us performing at castles all over England, and which continues in a reduced form to this day. Events were staged at Portchester, Pevensey, Old Sarum, Battle Abbey (as part of one of the first multi-period events entitled “Armies of the Sussex Coast” and including a larger event in 1995), Framlingham, Kenilworth, Bolsover, Beeston, Scarborough, Whitby Abbey and Tynemouth.

The Maldon millennium event in 1991 was also a notable highlight, with a living history village of 30+ units including the society’s own portable longhouse which had been inspired by a much smaller but still impressive wooden building erected by Neil Shepherd and the Leeds group. The longhouse went on to feature at a number of events over the years, though storage and transport requirements limited its appearances. The second outing for the longhouse was at Lindisfarne in 1993, where the islanders were marking 1200 years since the first raid recorded in the Anglo-Saxon Chronicle. On a tidal island with no police, our members were looking forward to extended opening hours in the local pubs – until they worked out that the small tent on its own in the corner of the camping field contained a sergeant and constable posted to the island by Northumbria Police for the event. Undeterred, the whole society of around 150 squeezed into the bar and garden of the Ship Inn after all of the other hotels and bars turned up their noses at a bunch of hairy Vikings, and all went well until 1am when the door opened and in walked the sergeant and constable. Silence fell, and the landlord was summoned. Fearful of losing his licence and the custom of the Vikings for the rest of the weekend, he asked how he could help the police. The answer was very welcome – “Two pints of lager please, we’re really thirsty”!

Alongside the Lindisfarne public events, the society took part in several film shoots in 1992 and 1993 for Cromwell Films, which included The Vikings Wars and Alfred the Great and a feature on the Battle of Hastings. Lindisfarne provided an opportunity for an extended shoot, with two fibreglass longships hired from the Jorvik Viking Centre used to stage a beach raid with crews from the society, while the Alfred and Hastings filming were staged at Tatton Old Hall near Manchester. An edited highlights package of the Lindisfarne filming is available in the archives (VIDEO) alongside a basic edit of the Alfred film (VIDEO).

The London group which Gerry East had built remained active into the 90s, but with dwindling numbers. This spawned a separate group led by Phil Burthem, called the Jomsborgelag, or more commonly the Elag. At the end of the 1993 season a further parting of the ways occurred when Phil left the society, with the Jomsborgelag then founding the International Viking Association, which became the Jomsvikings. Having stepped away from the UK society, this concentrated on events in Europe and founded or fostered groups in Denmark, Sweden, the Netherlands, Germany and Poland, plus the US.

Chris Robinson stepped down in 1994, with Tony Sayer being appointed as Konungr. Tony had been asked by Chris to serve as the Provincial Members Co-ordinator, a new role at the time as the number of members who chose to remain outside of the established groups increased. Tony had also played the role of Byrthnoth at Maldon in 1991, and while he’d be the first to describe his later combat appearances as both minimal and minimalist, he remained a figurehead on the field well into the 2000s.

As part of the push for greater authenticity as the 80s turned into the 90s, Tony had listened to the complaints of many members that they wanted to be more authentic but couldn’t find shoes anywhere. Tony then set about making shoes at a reasonable price, then adding shields and helmets on the same basis. He also filmed a number of our events on an early handheld video camera which he then compiled to produce an annual highlights video, complete with outtakes and funny bits at the end.

Hastings in 1995 (VIDEO) was a major event in many respects – the largest we had participated in at that time, and with more than half of the participants coming from our society. In addition, the living history encampment was now significantly larger, as groups moved from camping in a plastic tent and demonstrating crafts in a spartan LHE during the day, to full-time occupation of a densely packed authentic camp including warriors.

The 90s also saw the advent of larger multi-period events, starting at Battle Abbey in 1994 and Audley End in 1995, and when these proved successful in drawing in more public, English Heritage expanded the event and established the first History in Action event at Kirby Hall in 1996. This had re-enactors from every period between the Romans and the fall of the Berlin Wall in 1989, and was repeated annually until 2002, and then from 2005 it moved to a bigger site at Kelmarsh Hall.