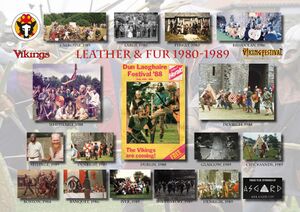 Fresh from the success of the Manx Millennium event in 1979, the 1980s dawned with more members, and more events. Now truly a national society though remaining small overall, the leadership passed to Geoff Carter of the Blackpool group when Gerry East stepped down in 1982.

With a range of interests and a varying degree of historical commitment, the 1980s was a decade of contrasts. It opened with fur leg wraps and “womble boots” to add to the sleeveless Afghan coats and sheepskin jerkins, and occasionally featured medieval flails, Japanese Naginatas and katanas, bardiches and bat wing axes. The decade closed with a committed drive for authenticity, and the first signs of a living history encampment. The path of progress was not a simple one however, with Kim Siddorn leading the Wessex group out of the society to form Regia Anglorum at the beginning of 1986. Film of Wessex and the Mercia group (VIDEO) plus a few of the new Rochdale group survives, showing Kim in full flow and being interviewed, plus a memorable piece with Richie Angove being asked how it felt to be dead.

Along the way, the society gained new places to demonstrate its skills – a series of events in Welsh castles became the mainstay of the calendar in the late 80s, with regular appearances at Denbigh, Rhuddlan, and Beaumaris where fights inside the courtyards were noisy and popular. The Blackpool Sveiter also appeared with some other groups on Saturday morning TV with Keith Chegwin in 1986 (VIDEO) , which has a great interview with Geoff Carter showing that while the general kit levels might look strange to us today, great efforts were made in some areas to produce very pretty items.

Another notable success was involvement in the Dublin Millennium events in 1988. This started with an advance party of about 50 participating in the St Patricks Day Parade in March which nearly caused an international incident as the society stopped in front of the Presidential podium and drew weapons to salute, only to be met by lots of close protection officers reaching inside their jackets to release their guns. The main event in June was significantly less risky, but with over 100 members together on a ferry and then on site for 8 days with two shows per day plus a huge number of school classes visiting, the improvement in our combat by the end of the week was very marked, as were some of the warriors!