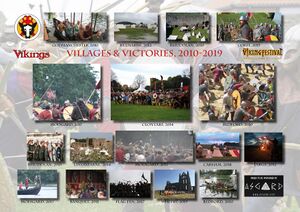 Having led the society for 17 years, Tony Sayer handed over the reins to Roger Barry early in 2011. The decade had opened with ships on the river in Bedford, on a baking hot weekend where the castle hill provided a unique view of the battlefield from above.

Events in places old and new included Lanark (VIDEO) as part of a regular Scottish multi-period festival, continuing growth in the popularity of the show at Corfe Castle (VIDEO), and of course our annual visit to Battle Abbey as well as a welcome return to our calendar of larger events at Rhuddlan Castle.

With English Heritage moving their renamed Festival of History to Kelmarsh Hall, the event grew to a size that few of us could believe, and featured WW1 and WW2 aircraft as well as ground displays from just about every possible period, but all of that came to an end when the site flooded after torrential rain in 2012, leading to the cancellation of the event and a substantial loss for EH which effectively prevented anything of this scale being attempted ever again. Hastings 2012 ended the same way, and also caused 2013 to be cancelled.

Despite these setbacks, voyages to distant lands were undertaken to spread our enjoyment to new places – Clontarf in 2014 (VIDEO) saw most of Dublin come out to watch an excellent event where warriors from Germany, Poland and Denmark took on those from the UK, Ireland and the Netherlands in an epic weekend which featured three competitive battles per display, with three displays per day. By the end of the weekend, the score was 9-9, with our side having been 8-1 down at the end of day one. It was an environment where the lessons had to be learned quickly.

Those lessons were then put to good use with a number of trips to Moesgård in Denmark, culminating in a larger contingent attending in 2017. We thought 2012 had been wet, but the Baltic weather systems drenched us with a succession of 10 minute thunderstorms, and the battlefield was ankle deep in liquid mud on both days. The atmosphere was electric, in both senses, and it was a hugely memorable event for all involved.

Alongside these, smaller scale visits to Iceland and to Bukkøy in Norway spread our experiences, and in 2018 a small group were also able to visit Vlaardingen in the Netherlands for another millennium event.

As we celebrate more than 50 years of Viking re-enactment from the days of our founding elders, two things remains constant – the camaraderie of those who stand beside you, both in the shieldwall and by the hearth, and the enjoyment we take from celebrating our past to the best of our ability. Long may it continue!