The crossbow was beginning to come into use in the later eleventh century, perhaps originating as a hunting item rather than a weapon of war. It proved popular in Frankish and Norman hands, perhaps as it was so easy to learn to use. There is some limited archaeological evidence for crossbow bolts in late Anglo-Saxon England (discussed below).

Crossbows should be wooden, with a wooden or composite wood/horn prod (see diagram below), should not have a stirrup, and may have either a rising-pin or rolling lock release mechanism. Crossbows with steel prods only became common in the 14th century, and so they may not be used within the period covered by the Society. 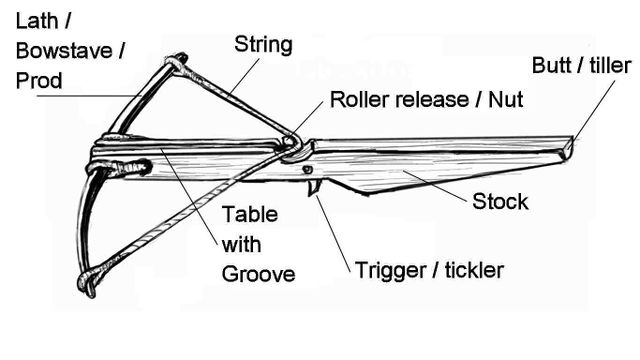 The conventional wisdom is that the crossbow was introduced to England following the Norman Conquest. However, the evidence isn't quite so clear-cut.

Ryan Lavelle's "Alfred's Wars" (Boydell, 2010) discusses the evidence for crossbows in England (p. 111, n.324). He points to three crossbow bolt-heads from Winchester found in early ninth and mid/late-tenth-century contexts, and a catch from a crossbow mechanism from Burbage (Wilts) generally attributed to the Romano-British period, but found alongside bonework with Anglo-Saxon decorations. Lavelle does not go so far as to conclude that the crossbows were in use long before 1066, but he suggests the evidence is more ambiguous than generally assumed.

There is also evidence for crossbows in use in tenth-century Germany, including depictions in a gospel belonging to Otto III, commissioned 998x1001; crossbows appear in the hands of both attackers and defenders in a siege scene, alongside slingers. There are assorted literary references to 'ballistae' and other arrow-shooting engines from the later Carolingian world, not least in Abbo of Saint-Germain's epic poem on the late ninth-century sieges of Paris. David Bachrach's "Warfare in 10th century Germany" (Boydell 2012) has a section on 'artillery' (pp.160-4) gives a flavour of the evidence (mostly literary and surprisingly common) which he suggests points to torsion-powered anti-personnel stone-throwing engines. This might suggest a relatively large crossbow, not unlike the ones used in the Late Roman period to defend fortifications.

The evidence does not suggest that crossbows were at all common in Anglo-Saxon England, but they do seem to have been known in the Carolingian and Ottonian worlds - which, after all, stretched to the Mediterranean, where a considerable amount of late Roman military technology continued in use, not least in the Byzantine empire.

Can. 29 of the 1139 Second Lateran Council under Pope Innocent II banned the use of crossbows, as well as slings and bows, against Christians. This Papal prohibition seems to have had very little impact on twelfth-century warfare, as crossbows became the predominant missile weapon. Partly this reflects its effectiveness and ease of training (especially when compared to a 'self' bow), but also the importance of siege warfare in the twelfth century.

In the fourteenth century, the increasing availability of steel led to even more powerful crossbows with steel prods. These were much slower to load than a 'self' bow, requiring a stirrup and (often) a windlass to span.

A much later depiction of a crossbow being spanned using a stirrup, from the Luttrell Psalter, c.1325-35. The tonsure suggests the user is a cleric - who really shouldn't be off hunting!

An early crossbow with wooden prod and 'rising pin' mechanism 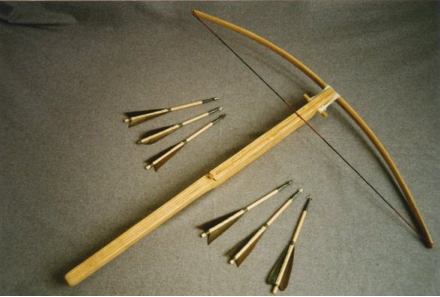 A 14th century steel crossbow with stirrup, 'rolling nut' mechanism and bolts in the later-style quiver. 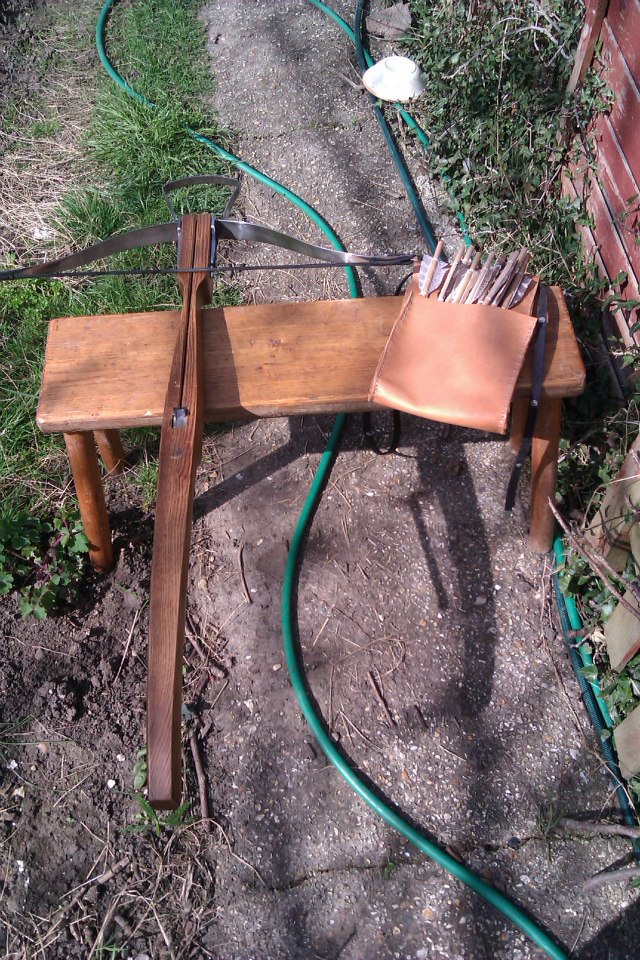 Anyone who possesses a crossbow should be aware of the Crossbows Act 1987. Essentially this makes it an offence for any minor to possess or purchase a crossbow capable of discharging a missile (excepting those with a draw weight of less than 1.4 kilograms), unless supervised by an adult over the age of 21.