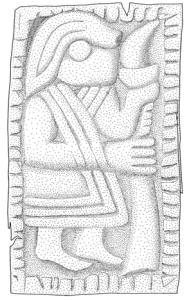 The Sutton Hoo Helmet shows figures wearing wrap-around thigh length garments held in place by a belt, not entirely dissimilar to the shorter garment worn by Louis the Pious in a manuscript illustration for De Laudibus Sanctae. This may be intended to show a thorax jacket such as Einhard describes Charlemagne wearing in the Life of Charlemagne.

Similar garments are shown on a Vendel helmet plaque, reaching to about the knee, and on guldgubber from Uppåkra and Bornholm. If it shows a kaftan rather than a coat, the figure on the Hunnestad Memorial also suggests a thigh-to-knee length for this garment. These depictions show broad bands along the edges of the garment, which may represent decorative strips of embroidery or tablet weave, or a fur lining/trim. One possibility is that the length of the garment increases over time, and/or with social status - in a similar way to tunics. One could equally posit a transition from the earlier short Germanic wrap to something more resembling the eastern style kaftan.

The kaftan replaces or supplements the overtunic, so should be made of a similar material, normally wool. It may be lined in linen or silk, and decorated accordingly.