The evidence for button-up coats suggests they're characteristic of eastern Vikings, showing probable influences from their contact with steppe peoples and the Byzantine empire. They should be worn only in conjunction with other eastern items such as Rus pants and pointy hats.

A possible button-up coat was shown on the Hunnestad Memorial before it was defaced. Fortunately, Ola Worm drew the stones before they were damaged. Though it has also been interpreted as a kaftan, one of the stones seems to have showed either a centre-fastening coat or a tunic with an extraordinarily high centre split. This is distinct from the obviously overlapped garments found in other images. He also seems to be wearing baggy Rus pants. 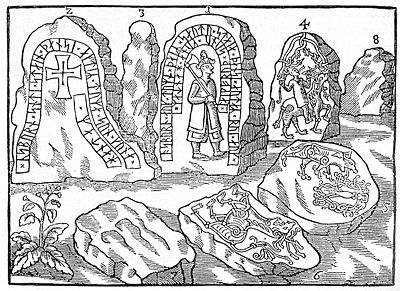 Five graves at Birka have been excavated with signs of a "coat" type garment, buttoning from neck to waist. Several others have similar trimmings, but no sign of buttons. It is possible that these were buttonless kaftans, or that the buttons were made of a material that has since degraded - it is not difficult to make wood, bone or cloth buttons.

Similar buttons were found in a tenth century grave at Valsgärde together with embroidered silk cuff trimmings, while another grave yielded a decorated collar in similar style, but no buttons.

A plain woollen fragment, featuring button holes, has also been found at Hedeby

The coat replaces or supplements the overtunic, so should be made of a similar material, normally wool. It may be lined in linen or silk, and should be decorated accordingly.

The pattern for a simple coat is similar to that of a gusseted tunic. Using wool, omit the front gore and extend the front slit all the way up to the neck. Optionally omit the rear gore, leaving a slit at the rear. Line it with linen or silk.

If you wish, add a long separate rectangle along the neckline to form a standing collar, and decorate it.

Buttons can be sewn straight on, and fastened through button holes, or attached and fastened using lengths of looped cord in a frog fastening - some care should be taken with the latter so you don't end up looking like a Napoleonic cavalryman.