Generally the pouches and purses we have evidence for are rather small, especially compared to the needs of modern re-enactors. They are typically the size of a hand or smaller, and would not fit much more than a set of keys. If you need to carry so much stuff around with you that you need a pouch more than 5" across (12cm),, you need to use a satchel instead.

On the small island of Ihom (or Yholm) was found a silver treasure buried in a leather purse with gilded decoration. It contained at least 550 coins, most of the Arabic, as well as silver ingots. Based on the coins in the treasure, it was buried near the end of Svein Forkbeard's reign. More information and reconstructions can be found here

Many leather fragments have been found in Hedeby, some can be identified as drawstring pouches of various sizes. The larger of the finds is 13 cm wide and 15 cm tall. The one in the photo is a similar one found in Kalmar [8], Sweden. 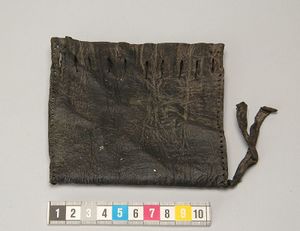 Textile purse for scale weights coming from a male grave in Jåtten, Hetland, Rogaland [9]. The size of the purse is 6,5 × 6,5 cm. 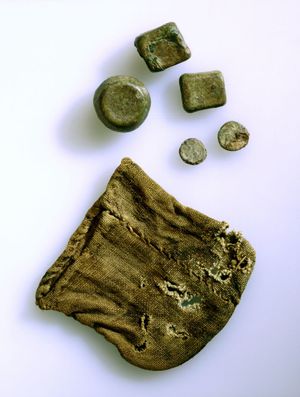 Leather purse from Grimstad [10]. Contained weights and one silver coin. The purse is 11.5 cm wide, and is made from four pieces of leather. Three of the pieces are rectangular, and about the same size, the fourth piece is a smal triangle used as part of the closure. Two of the pieces have been sewn together along three sides to form a room, the last piece together with the triangle is part of a flap for closing.

In the Gokstad ship burial was found a highly decorated leather purse. The dimensions are 13.5 cm wide, 8.5 cm high. For the purse to be useful, the cutouts must have been backed with a different material as shown in the reproduction. 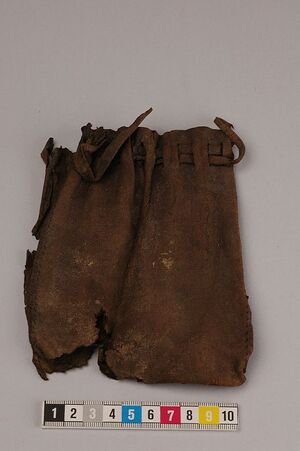 Lyre shaped pouches have been found several places in Sweden. Note that the leather and fur in these displays have been added by the museum curators and is not part of the archaeology.

Another characteristic pouch find from Sweden is the sabretache or tarsoly. The origin of this pouch is further East with the Magyars. There is no evidence that these had leather tooling, the only decoration is the metal fittings. The pouches are at most 5 inches or 12 cm wide.

Fragments described as a 'purse for weights' was found in Birka[12]. It had gilded decoration. Here are two of the original fragments and a front and back view of the museum reproduction. 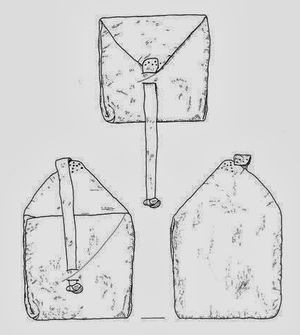 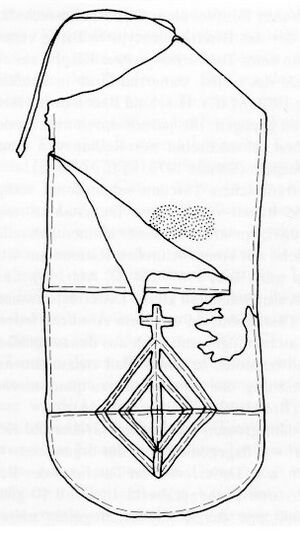 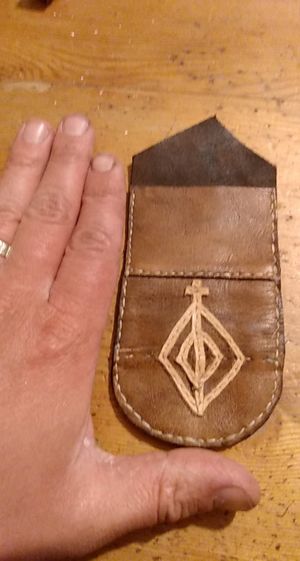 Fragments of a drawstring pouch has been found in York.

Island Bridge, Dublin. It measures 6.8cm across. While available 'reproductions' are made similar to the tarsoly pouches, the reconstruction suggested by the museum is very different. 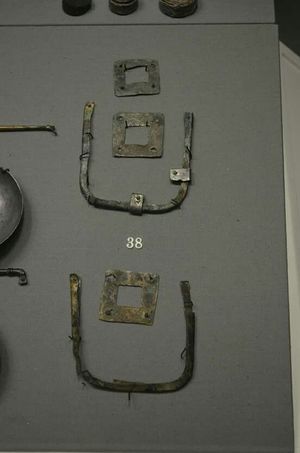 The finds show that pouches and purses have been used for a variety of things. Several pouches have been found with coins, and one find from Hedeby harbour contained 6 silver coins and 600 micro beads, most of them in various shades of blue. Images of the beads can be found here. Some very small drawstring pouches have been found. These were usually plain and simple, as they appear to have been worn on a long drawstring around the neck, under the tunic. This style of pouch is particularly appropriate as a small coin-pouch with a selection of reproduction coins.

There are examples of pouches found still containing weights, sometimes with a set of scales next to the pouch.

It is assumed that pouches or purses would also have been used to carry fire starting kit, with flint, steel and material to catch the sparks, as well as the initial dry small kindling.

What pouch can I use with my kit

Members should choose pouches that are appropriate for their kit, both socially and culturally. Some models have been found in many locations and can be used by every social level and every culture, this is particularly true for the drawstring design. Other designs are very culture and status specific, this goes for the characteristic box an lyre shaped pouches from Sweden. These should only be used with a Swedish kit, at shows where this is appropriate.