Short seaxes may be up to 14" long, and were a multi-purpose tool rather like a machete, used for preparing food, butchering, pruning, woodcutting etc. Examples of seaxes from burials in seventh-century northern France show considerable wear, suggesting that they were immensely practical agricultural implements.

The typology of seax shapes can be found here.

While short seaxes may be used as melee weapons, they should never be used as primary combat weapons. Any combatant who finds himself only armed with a short seax should either vote with his feet and flee, find a proper weapon (if he's determined to die with honour), or listen to the sound of the Norns about to snip the thread of his life...

There is a tendency to refer to a knife as a “scramaseax” or “scram”. We really would prefer you to call it a “seax”. The word “scramaseax” is extremely unusual, only appearing once (in Gregory of Tours' sixth-century History of the Franks, where it refers to an assassin’s weapon). Since knives were worn and used daily by all free men and women, it isn’t appropriate to suggest that most of the population are honourless killers!

They are suspended horizontally from the belt, worn at the front. Partly this was to display the decoration on the front of the sheath, but also for ease of drawing. Drawing the seax from its sheath will mean your right hand pulls back, which isn't very handy if you want to bring it up to a guard position, but is perfect for stabbing an enemy in the stomach. You don't draw a seax to start a fight - you use it to finish one!

See here for further information on seax sheaths. Note that seax sheaths should always be made with a sharp point at the end, even if the actual weapon is a combat blunt with a rounded end.

The cathedral treasury in Aachen includes 'Charlemagne's hunting knife', in fact a tenth-century Anglo-Saxon seax with its decorated sheath. 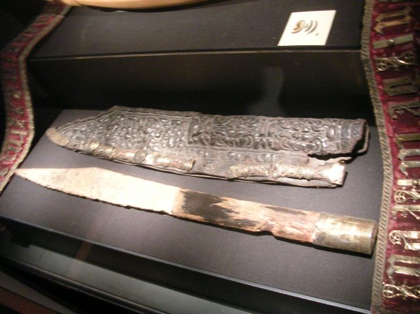