Spears were the most popular combat weapon, especially among the poorer sections of society – after all, it was cheap (mostly made of wood), could be used when hunting and kept the enemy a safer distance away. Ideally we would like to see every combatant carrying a spear, at least for the first combat clash. 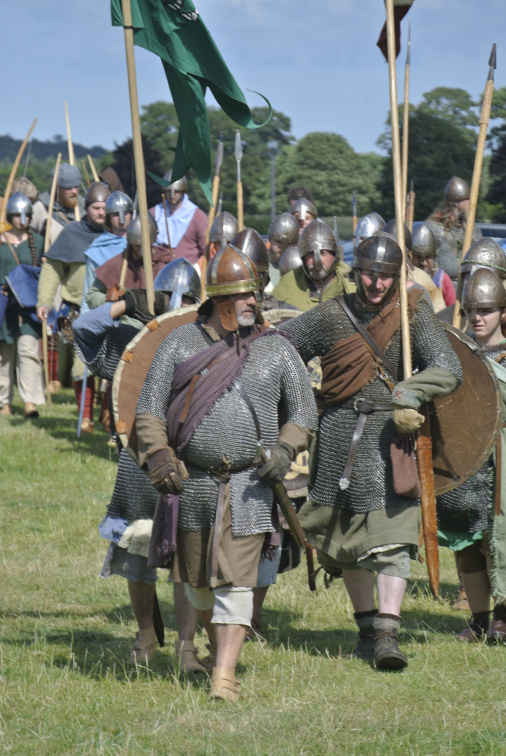 In period, there was little or no distinction between spears and javelins. However, the Vikings Society's combat rules requires them to be rather different. Socketed spears may only be used in melee; shorter tanged javelins may be thrown or used in melee.

Spears in the Vikings Society 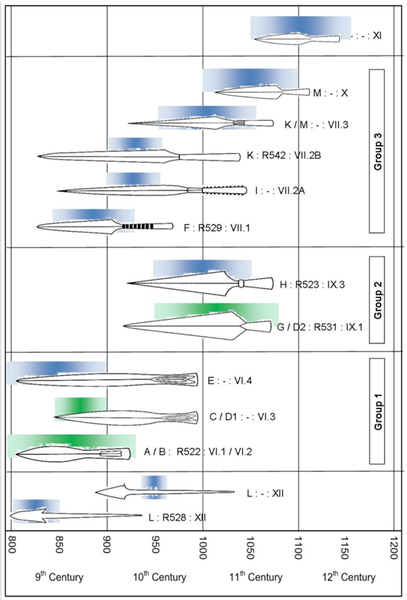 A helpful summary of the main types of spear in use in the 8th-11th centuries, based on Petersen's typology of viking age spearheads.. Discussion of the types can be found at Viking Compendium site.

From the later eleventh century, higher status combatants (particularly knights) may add cloth pennants to their spears, reflecting their cavalry origins. These should be small flags using the same colour of cloth and design as the shield and (from the later twelfth century) surcoat. They may be rectangular or tapered to one or two points (i.e. long triangle or forked). The pennant should not be more than 6-8” wide and 1-2’ long. They should have a ‘tube’ of material just big enough to go around the spear shaft, with thonging at top and bottom to be tied around the spear.

There are a number of examples of ‘sword-on-a-stick’ spearheads from our period, in some cases 2’6” of spearhead. This may be linked to the ‘atgeir’, which appears in later sagas sometimes translated as ‘halberd’, but apparently used like a spear (see below). Very long spearheads do not seem to have been all that widespread and popular – Petersen’s type E are dated to the mid-ninth century, type 'I' to the first half of the tenth century (though probably not in huge numbers) and type 'K' to the "late Viking age". While we don’t object to ‘sword-on-a-stick’ spears, we would not encourage them in large numbers. In any case, since the overall length of a spear is limited to 7’6” for safety reasons, an excessive length of spearhead can look a bit silly, as well as producing a heavier and unbalanced weapon.

‘Winged’ spearheads were in use in the ninth century in England and are depicted in Norman and Frankish hands in the eleventh century (including in the Bayeux Tapestry). Wings do remain on spears for a long time (e.g. Napoleonic colour sergeants’ partisans). ‘Winged’ spears are acceptable throughout our period. They are particularly encouraged in Norman hands, especially for longer spears.

A number of single-edged spearheads have been found from viking age Ireland, including at least twelve from the Kilmainham/Islandbridge in Dublin. This type of spearhead is very different to the style usually found in the Anglo-Saxon or Viking worlds (and is not included in the otherwise comprehensive Petersen typology). This style seems to be distinctive to Ireland, possibly with greater use around the Irish Sea area. 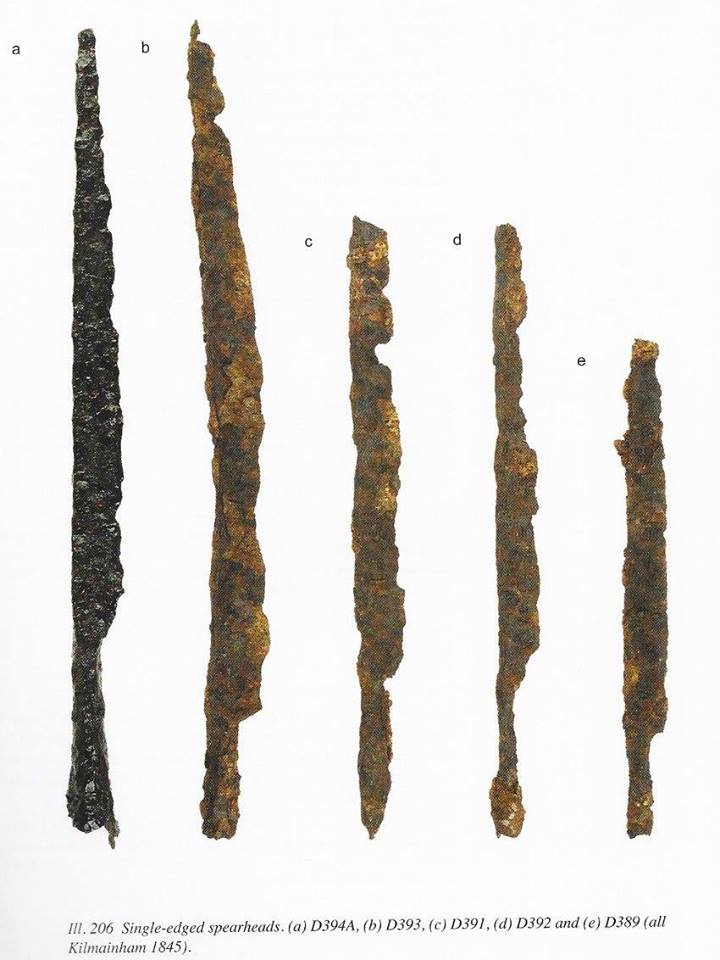 Some of the Icelandic sagas describe warriors using a weapon called an 'atgeir' or 'aetgeir'. Exactly how this should be translated is a matter of debate. It is sometimes rendered as 'halberd' or 'glaive', raising the possibility of a hybrid polearm. As the weapon is sometimes described or translated as “hewing-spear” or “thrusting-spear” it could refer more to a family of heavy bladed weapons that are equally suited to chopping or thrusting, rather than an individual weapon.

Nothing that can be categorically described as an 'atgeir' has been found in the period 800-1100. The assorted spear or axe heads from the period all seem to be just that – spear or axe, not a hybrid.

However, hybrid polearms of this kind became much more common in the thirteenth century - ie the point at which the Icelandic sagas were being compiled and written down. In Njal's Saga, Gunnar uses an 'atgeir' which has a reasonably detailed description, and sounds much more like a later polearm than any type of known spear. It is also magical!

Unless archaeology or other new evidence suggests otherwise, the atgeir is probably best regarded as an element of thirteenth-century license when retelling the sagas. 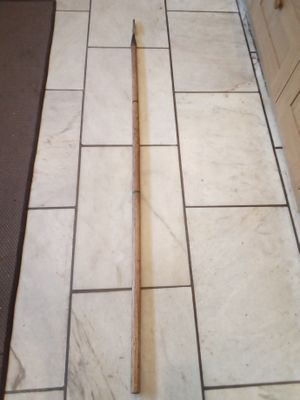 Please remember that, when gripping your shaft, your whole hand – including your combat gloves – should be within the middle third of the shaft.

Please remember – it is your whole hand – including your combat glove – that should be within the middle third of your shaft.

Spears in the Sagas

"Then Thorolf became so furious that he cast his shield on his back, and, grasping his spear with both hands, bounded forward dealing cut and thrust on either side. Men sprang away from him both ways, but he slew many."

"Gunnar clutches the spear with both hands, and turns on (Thorbrand) quickly and drives it through him, and hurls him down on the ground. Then up sprung Asbrand his brother. Gunnar thrusts at him with the spear, and he threw his shield before the blow, but the spear passed clean through the shield and broke both his arms, and down he fell from the wall."

"At this brunt Helgi, the son of Hardbien, rushed in with a spear, the head of which was an ell long, and the shaft bound with iron. When Bolli saw that he cast away his sword, and took his shield in both hands, and went towards the dairy door to meet Helgi. Helgi thrust at Bolli with the spear right through the shield and through him."