Weave we, weave we such web-of-spears as the young war-worker waged afore-time. Forth shall we fare where the fray is thickest, where friends and fellows ’gainst foemen battle. - The Song of the Valkeries 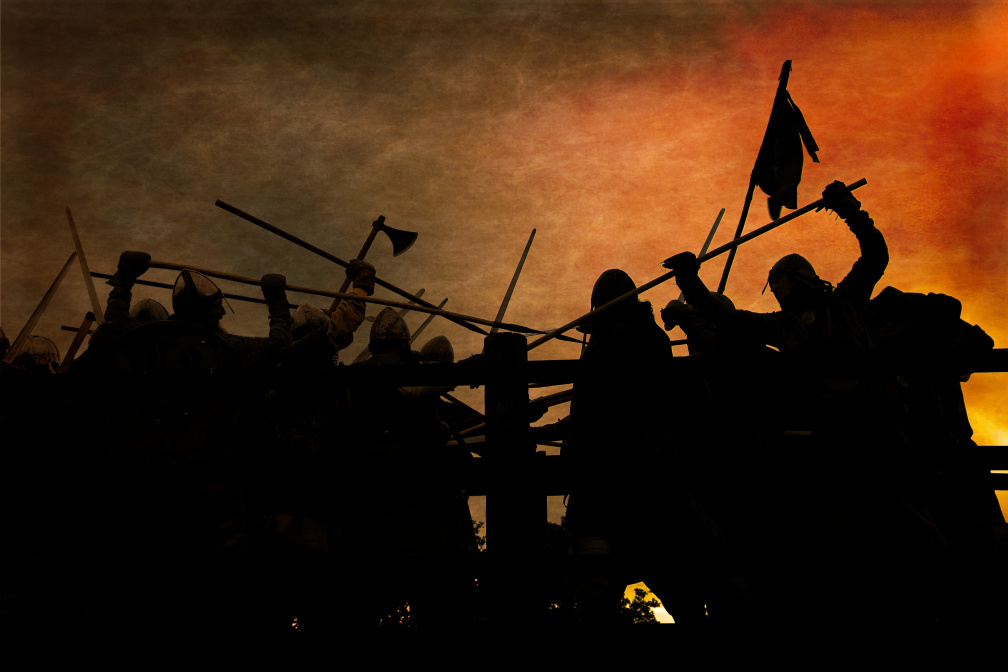 Recreating the battles and skills of a warrior of the dark ages is at the heart of what we do - to bring to life the epic events that have shaped our history. To master the art of melee combat can take a life time of study but after a short but concerted period of training you too will be able to sample what some of these great battles must have felt like. So whether you would like to stand in the Saxon shield wall at the Battle of Hastings or be a rampaging Viking Warrior at the Battle of Maldon, you will need to learn the craft of the Warrior so that sagas may be told of your deeds upon the battlefield.

Introduction to Melee Arms and Armour

From sword and shield, to spear and long axe; the song of the shield wall and the discipline of the dark age warrior - these skills we train for and demonstrate upon the field of battle. For most Saxon and even Viking warriors, your battle craft would usually be dominated by spear and shield but we embrace and train with all of the melee weapons and armour of the period. 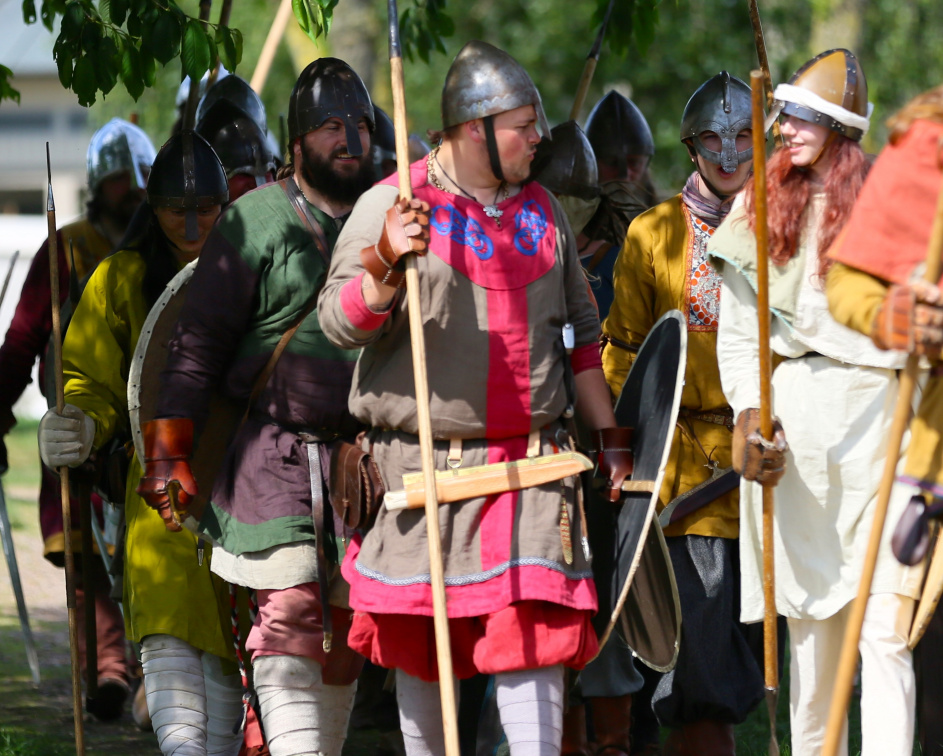 But to start upon your journey as a warrior, your preparations shall begin with a solid defense and suitable protective equipment.

Although armour was less common on the battlefield in the dark ages, all warriors would need a shield in order to be able to stand in the shieldwall. Helmets would be very uncommon and Combat gloves were not used in battle but for our combat these are part of our Mandatory Protective Equipment. Most warriors favour the Round shield and with helmet, gloves and shield you are now ready to begin your training. You just need to choose a suitable weapon. 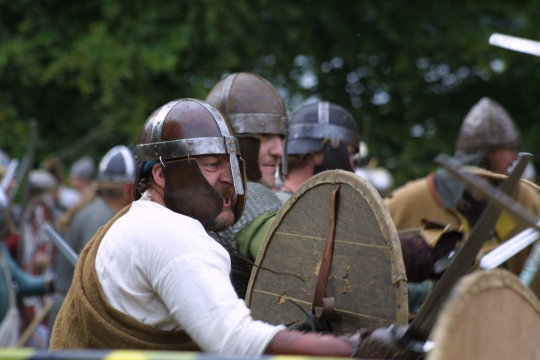 Now you have your basic armour, it is time to choose whether to train as a Warrior in melee combat or to favour Missile weapons. For fighting in the shieldwall, there is the Spear and Hand axe, a Seax as a back up weapon or even a Sword if you have a wealthy sponsor. We count all of these as basic weapons, although mastering any weapon can take years of training and practise. 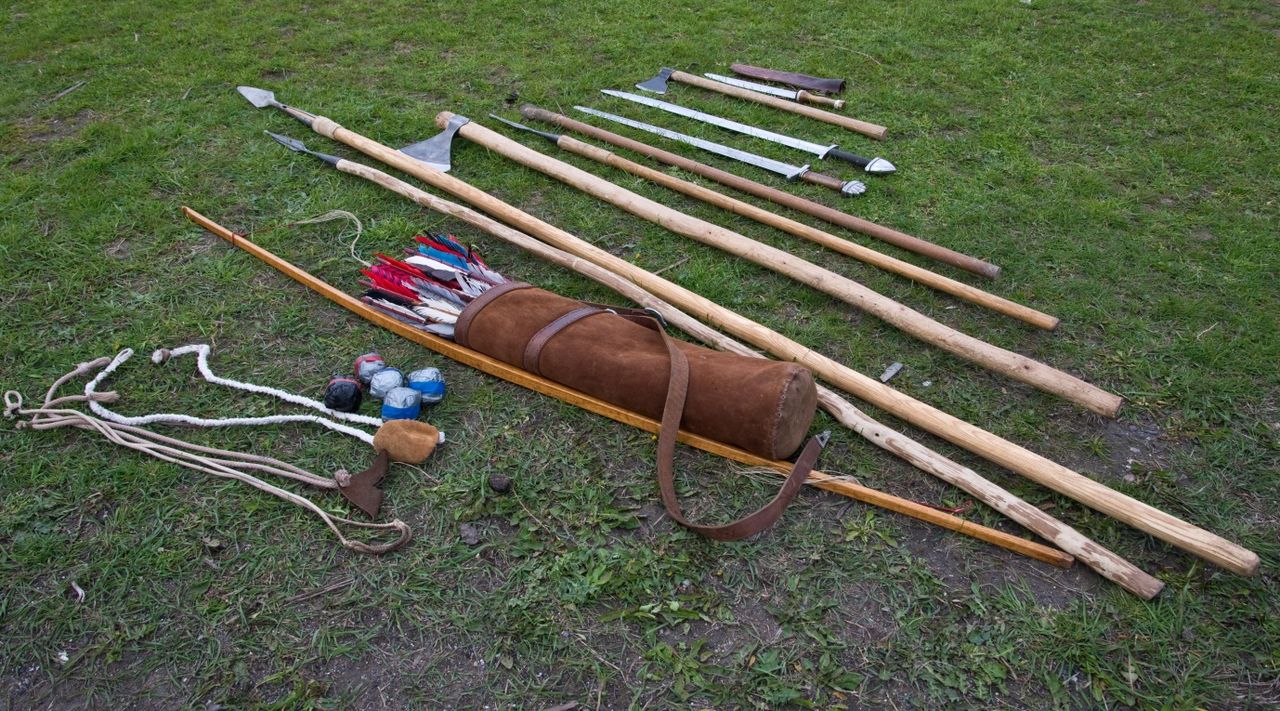 Now you have reviewed the basic melee weapons and chosen which weapon you wish to learn, speak to one of our training officers or review our videos on Learning the Basics

The shieldwall is at the heart of dark-age combat and so training to be a part of a defensive line is important for the warrior. Your skill in itself and a sturdy shield will only keep you alive for so long - what you need is to be able to trust and work with your companions in arms. You must master the Shieldwall. For more guidance on training to fight as part of this formation consult the section on Shield Wall Combat or talk to one of our combat list of assessing officers. 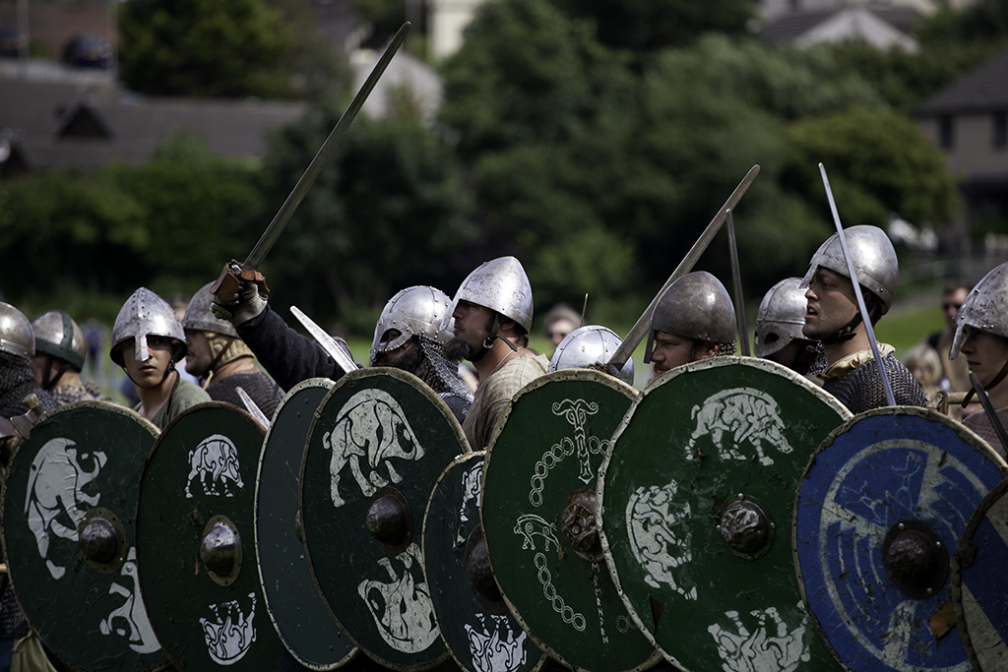 It takes skill and practise to be able to work alongside your comrades and hold a shieldwall in battle. Your training officer will know a number of exercises to help you. Here is an example of one such exercise, "Hold the Line" where a small band of warriors must defend a position. 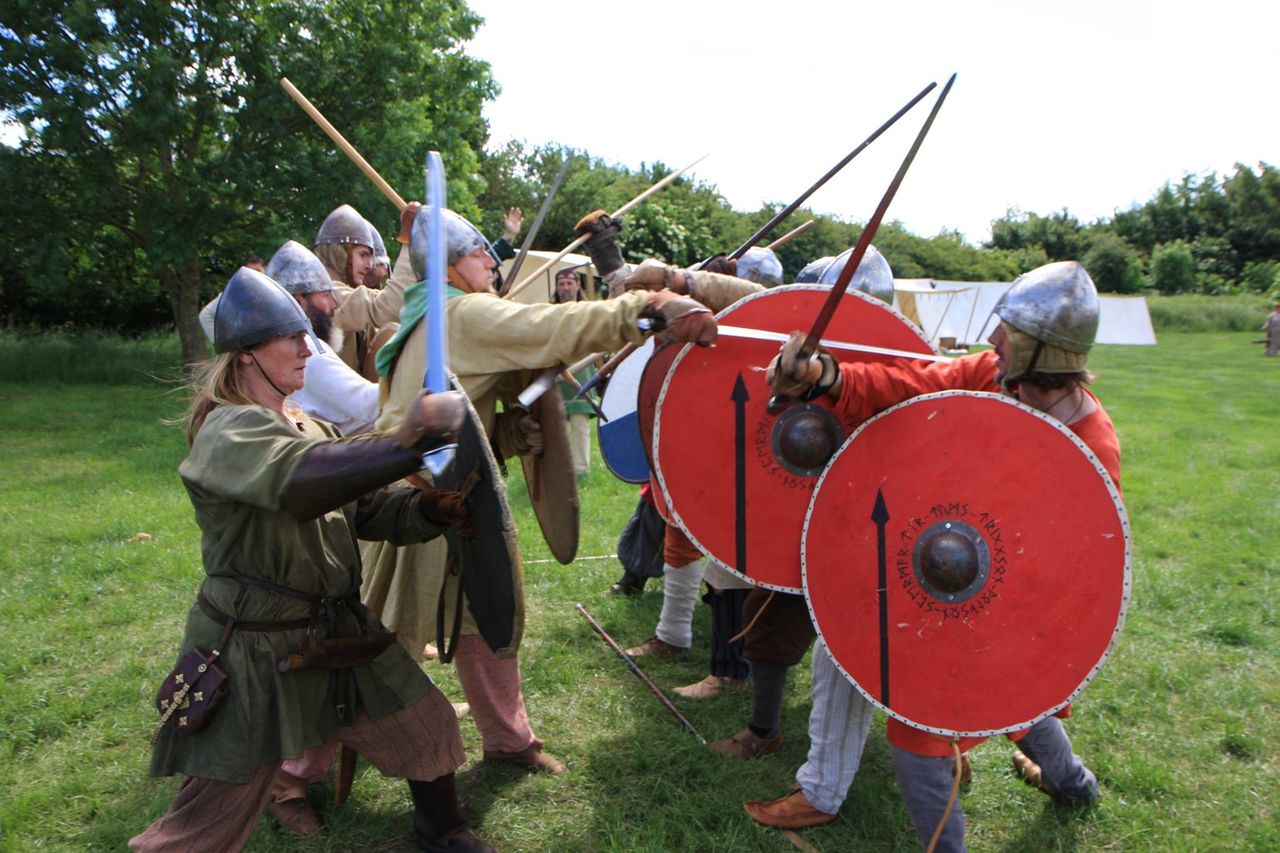 You now are ready to stand alongside your comrades in arms and defend your lands and homes against Viking raiders. Should your shieldwall break then all hope is lost. If your wall holds true, then surely the battle is won. 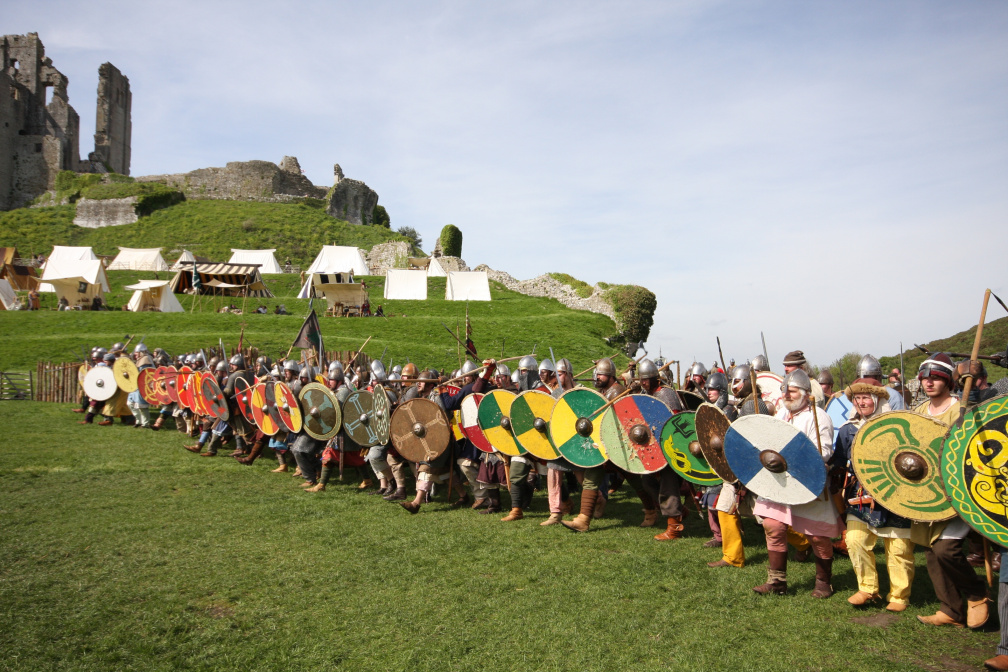 It is time to test your skill and honour as a warrior. Let the battle commence. 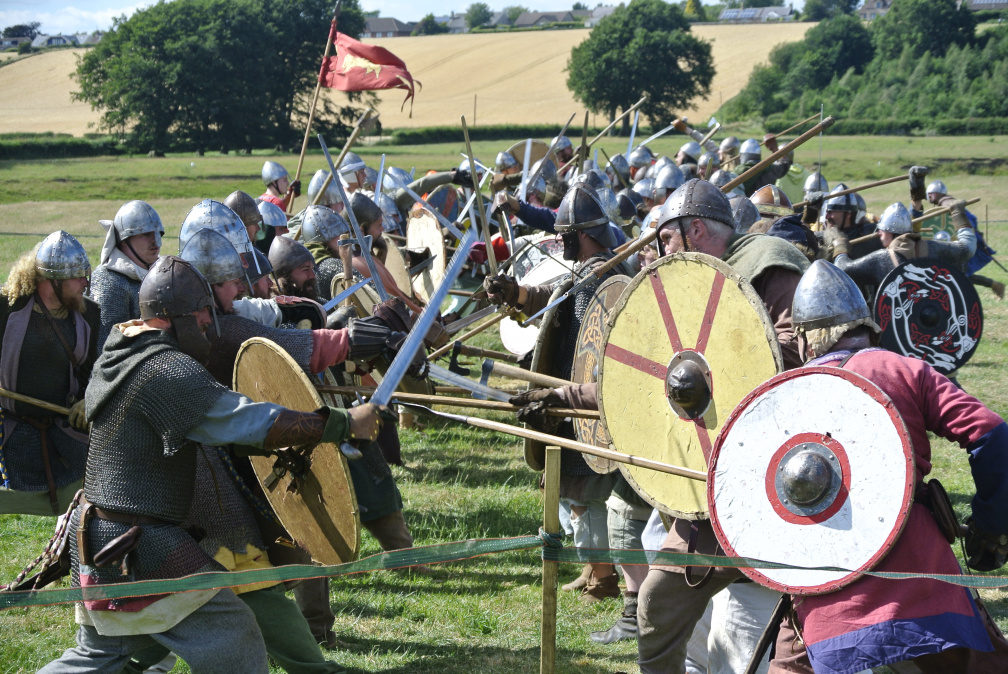 Now you have learned the basics of safety and combat upon the battlefield, it is time to hone your skill as a warrior. Long axe, two-handed spear, two-weapon fighting, a Norman mace or to concentrate on advanced display fighting or advanced combat to truly master the battlefield and maybe stand as the King's Champion. 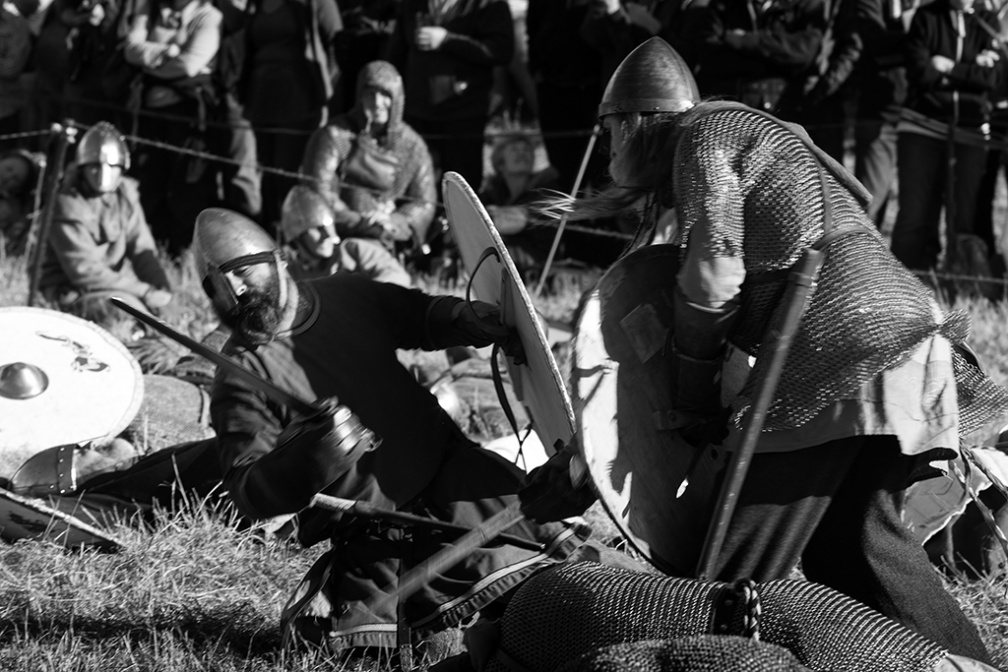 With Helmet and Maille and now highly trained in dark-age specialist weaponry, Sword, Spear or Long axe, you are ready to put your training to the test as a professional soldier of the period. As a Saxon Huscarl or Norman Knight, stand up to claim honour as a Warrior for your king.

Here are the King's Own, well-armed and highly-trained huscarls bearing the banner of the King, standing alongside regular troops as they wait to do the King's duty. 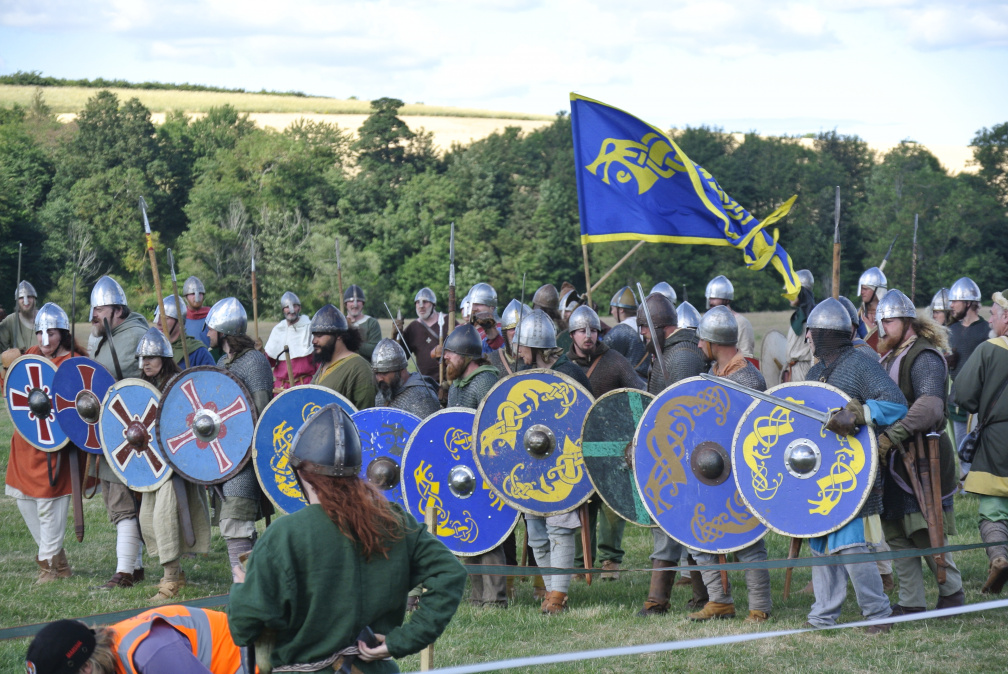 There are other ways for the highly trained Viking warrior to heap honour and glory upon his name: combat in the Holmgang!

At all times, warriors must be in full control of any weapon they are wielding. All blows are expected to land on target and under control.

A Valid Hit is one which is delivered to a Target Area with Lethal Character. Any attack that does not have Lethal Character will not score a Valid Hit and may be ignored as a “flesh wound”. Appropriate reaction to all hits at all times should be displayed.

In order to score a Kill on an opponent, two Valid Hits with Lethal Character must be landed within a ten second window. After receiving the first Valid Hit the struck warrior;

If the warrior’s knee touches the ground after the first valid hit they are considered to be ‘dead’ and may not take part in any further combat. The second hit;

If, at the end of the slow count of ten, no second Valid Hit has been received, the warrior may re-join the melee, fully healed. If the first hit is a clear kill (e.g. a big showy drag across the guts) then the defending warrior should not wait for the second blow but just roll over and ‘die’, especially if in full view of an audience. Attackers should always place a coup de grace on every opponent, even if the first Valid Hit is a spectacular cut across an unarmoured stomach, thus finishing off the opponent and stopping any later debate. However, in the cut and thrust of battle the second shot might be missed and it is expected that the victim would be honourable enough to take an excellent 1-shot death under those situations rather than miraculously healing themselves. In order to prolong the “scripted” phases of battles, warriors should hold back from delivering the second kill unless a blatant opening is left. Casualties during these “scripted” phases may be recycled.

In the event that two opponents score a Valid Hit simultaneously, this is known as a ‘Mutual Hit’. Both warriors must take the hit and react in accordance with the rules above, unless one of the warriors is armoured in which case see below.

The Effect of Armour

Whilst warriors are encouraged to wear armour appropriate to their character portrayal, the only benefit this provides in combat is that the armoured warrior will ‘win’ in the event of a Mutual Kill if their opponent is unarmoured. For the purposes of these rules, armour is classed as maille and does not include simple padded, leather or lamellar armour. 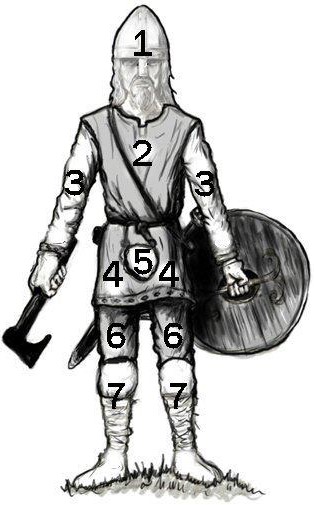 A hit to any of these areas by the metal part of any weapon, the rubber blunt on an arrow or sling bullet is a Valid Hit if delivered with Lethal Character.

2 Chest & Back (not Shoulders or Spine)

6 Upper leg (only for missile weapons)

Deliberate attacks to these areas are not permitted. A hit to this area should be reacted to, especially in the presence of an audience but will not count as a valid hit."""

A hit to a banned area is not permitted. In the event of a blow being landed in a banned area, the offending warrior should give their opponent the opportunity to kill them (by committing a suicidal attack if necessary).

When striking to an opponent’s back, care should be taken to avoid the spinal area and the flat of the weapon used. If possible, such blows to the rear should be delivered to the buttocks

The hooking of any part of a warrior by any weapon (e.g. axes) is forbidden. If a hooking situation occurs and the warrior is unable to immediately disengage, the weapon must be discarded.

The hooking of weapons is allowed, but care must be taken where the weapon will land if a disarm occurs.

Arrows, bolts and bullets loosed in high angle lob are permitted to hit the head or neck (banned area) or shoulders, and should be reacted to as a Valid Hit.

Should a sling bullet, released using the under arm action, strike a banned area in un-scripted combat then the slinger should react, as if he had received a valid hit, and take a ten count.

Mandatory safety equipment must be worn at all times when taking part in any combat activity unless otherwise stated.

Head Protection Head protection must be worn by anyone entering the arena during combat displays at shows, or otherwise participating in any form of combat at “The Vikings” events.

Any combatant under the age of 18 must be identified by a white band around their Head Protection.

The minimum requirement for Head Protection is a steel helmet / hardened leather skull cap, or other nonauthentic materials (e.g. bump cap shell) concealed within an authentic hat, hood or wimple. All protective headgear must confirm with Society Authenticity Regulations. Head Protection must be well secured to prevent loss during combat.

The minimum requirement for gloves is that they provide impact protection to the hands and the full length of the fingers. The minimum recommended padding is 6mm of hard leather or equivalent. It is the responsibility of the wearer to satisfy themselves that their gloves provide adequate protection, however any society armourer, training officer or Hersir may ban the use of a set of gloves if they cannot be convinced of their efficacy. If modern gloves are used, they must be disguised to conform to SAR. In particular, any obviously modern colours should be toned down so that they are unobtrusive (for example using boot polish).

Those not taking part in any hand to hand combat on the battlefield need only wear Head Protection. This list includes but is not limited to

If approached by a warrior in combat, these participants must flee and leave the battlefield.

The following 7 pages are in this category, out of 7 total.