The aim of this writing is to offer a brief, technical guide for Viking and Anglo-Saxon re-enactors on the various musical instruments that were played in Britain and wider Northern Europe during our period of interest. It considers a timescale beginning with the establishment of the Anglo-Saxons in England, through the invasions of the Isles and other areas of Europe by Danes and the Norse, and ending in the mid to late 11th century. 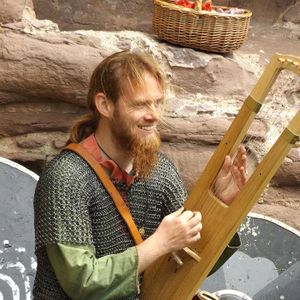 A combination of archaeology, carvings and illustrations provide a significant insight into the musical instruments played by these peoples. We find a wide range of instruments in terms of the materials from which they were made, the variations of similar instruments, and the possible tuning and playability of them. What we are unsure of is exactly what tunes, melodies and songs actually sounded like. My own experience is that when I allow the instruments to effectively play themselves, they naturally sound like archetypal, instantly recognisable North European folk music.

I have studied this subject privately for a number of years, assisted greatly by the learned knowledge of renowned ancient instrument maker and musician, Corwen Broch. I am a member of the Viking Society, and it has been my self-imposed objective to offer as comprehensive a display of musical instruments as possible, focusing on playing and contextual knowledge; a work in progress indeed!

Whilst there were some differences in culture between the Saxons and the Norsemen, there are undoubtedly a great deal of similarities; musical instruments are certainly no exception and as time progressed, instruments were shared widely in a geographical context, helped by both invasions and advancing trade routes. Thus, the instruments I shall discuss herein belong to the age of our North European ancestors. Some time ago, I asked Corwen Broch to provide a list of instruments that I would witness being played had I travelled back in time to the year 793, and wandered through England until the Battle of Hastings in 1066. He was kind enough to offer the following:

Instruments that possibly, perhaps even probably, existed include:

Authenticity for the Re-enactor

As ever, we strive to offer as authentic an experience for the public as we possibly can. Thus, there are a number of points for us to consider when portraying the music of the age. We know very well from archaeology the general sizes and shapes of instruments, those wishing to craft their own should not deviate from this for any instrument. Crafting is, of course, to be strongly encouraged, but we must avoid too much modification for any reason. That said, nylgut strings for lyres are sensible. Sheep gut is brittle, does not stay in tune very well, and is difficult to source. Nylgut is preferable to plain nylon through being synthetic gut, metal strings should be avoided entirely for lack of providence. Plectrums should be made of bone, horn or antler; they are very easy to source online so there is no need for flashy guitar picks.

Bowed lyre strings should be horsehair which is very easy to source, and limited to the shapes and sizes accepted by scholars and displayed in various museums.

Wooden instruments must be made from the branches of trees native to the British Isles and Northern Europe. Indian rosewood and Oriental bamboo flutes are easier to source, as are Native American flutes, but they are all distinct by design and culture, and should be avoided.

Bone flutes are authentic when made from animals native to our geographical area so, please, no exotic creatures or dinosaurs!!!

Fiddles have little providence, and should be limited to a replica of the Hedeby Rebec (subject to Society rules).

Drums, at an absolute pinch could be allowed, but should be limited to a rawhide frame drum with a simple wooden beater (subject to Society rules).

Music comes from the heart; it has always been so, and always shall be. Music from the age of the Vikings and Anglo-Saxons was not committed to writing, but when we play their instruments from the heart, we rediscover their sounds.

Established musicians in the Society including myself are:

Instrument makers in the Society include:

We are always happy to engage with anyone interested and I will personally be delighted to talk forever!